Review: OUR DAY WILL COME, An Instant Cult Title Arrives on Digital VOD 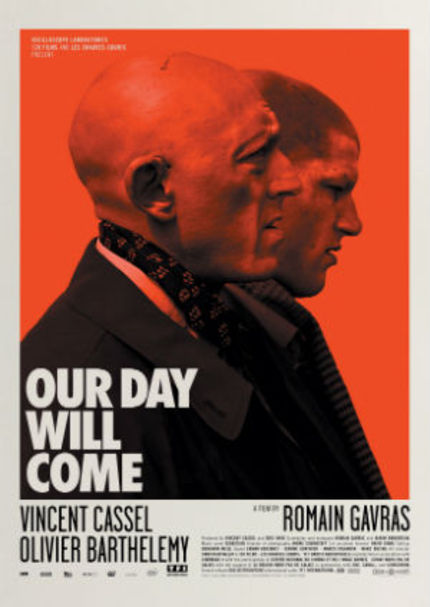 It remains to be seen whether he will be loved our hated by audiences at large - and both seem equally likely - yet there is no doubt at all that Our Day Will Come announces the arrival of Romain Gavras as a significant new talent in world cinema. Though working with a very different style, Gavras embraces the same sort of fuck you abrasiveness that has made Lars Von Trier such a polarizing presence on the world scene and we should expect nothing less from Gavras.

A cynical outsider epic, Our Day Will Come is the story of Remy and Patrick, a pair of misfits joined together by their dislike of society and their red hair. Patrick (Vincent Cassel) is a psychotherapist sick to death of listening to the banalities of people's problems and pretending to care. He is cynical in the extreme and seemingly desperate for anything he can manipulate for his own entertainment.

And that object comes in the form of Remy, a boy in his late teens from a shitty family that treats him horribly. Remy has been ostracized for his entire life, other children fixating on the color of his hair as the prime fodder for their teasing. Once the two meet, sparks fly immediately.

Patrick stumbles across Remy as the youth runs down the road away from his home, where he has just assaulted his mother and sister. On a whim, Patrick picks the boy up offers a ride, and begins to play, his training giving him ample skills to read and manipulate Remy's obvious insecurities. It begins with Patrick winning Remy's trust, offering to help him, but the help soon turns to Patrick picking fights that Remy cannot avoid and pushing the young man into ever more extreme and uncomfortable situations.

But what Patrick does not anticipate, perhaps, is that his goading will unlock something in Remy, a desperation for acceptance fused with a facility for violence, and before long Remy has taken charge of the situation and forced Remy to take him on an increasingly sociopathic road trip to the ferry that will take them to Ireland, where Remy dreams he will assume the mantle of a sort of redhead messiah.

There is absolutely no doubt that Gavras is a wildly self-indulgent filmmaker, one prone to ranting and bursts of rage. But there is also no doubt that Gavras has the skills and intelligence to back that indulgence up, his debut feature constantly writhing and twisting itself into new, unexpected shapes. He is bold and brash, and one wonders if Remy is not simply a replacement for himself in the film with the brilliant Vincent Cassel - who turns in an absolutely bravura performance here while also serving as a producer - egging him on and goading him ever farther from the sidelines.

Review originally published in slightly different form during the Toronto International Film Festival in September 2010. The film is now available to watch across the U.S. via iTunes, Amazon, XBox Live and other digital platforms. Visit Oscilloscope Laboratories for more information.