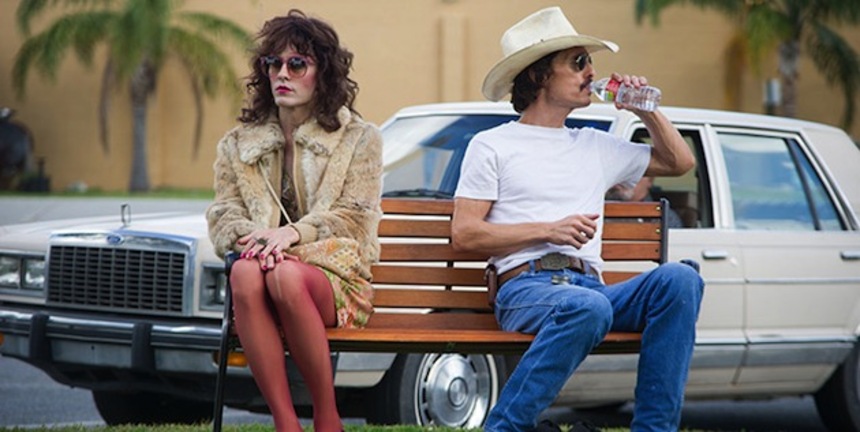 Given 30 days to live, Matthew McConaughey continues to sniff cocaine, drink hard liquor, and entertain sexually-unrestrained women in his wreck of a mobile home in Dallas, Texas, USA.

McConaughey, an outsized personality with a magnetic smile, here plays a man named Ron Woodroof, an outsized personality with a sickly smile who was given a fatal prognosis in 1985. As Woodroof, McConaughey resembles a drumstick after the meat has been chewed off, his head and bushy moustache wider than his emaciated body. Yet he is living "the good life," as he would probably define it, doing whatever he wants whenever he wants, and with whomever he wants.

He enjoys sex with women, but does not remember their names. He enjoys drinking and gambling with his buddies, but has no intention of paying off his losses. He is friends with a police officer, but does not hesitate to punch him in the face to save his own hide.

When he is informed at a hospital that he is HIV-positive, he is more offended by the idea that someone might think he is gay than by the prospect of death knocking on his door, storms out in anger, and resumes his risky behavior. But he is not stupid. Within days, he has done enough personal research to learn that drug users and people who engage in unprotected sex are also at risk, and realizes that his lifestyle has left him vulnerable.

He returns to the hospital in search of a drug that he has read might save his life. When a kind doctor (Jennifer Garner) informs him that the drug is not approved by the FDA, the U.S. Food and Drug Administration, he replies with justifiable exasperation, "Screw the FDA, I'm gonna be D.O.A.!"

The balance of the film, directed by Jean-Marc Vallee (C.R.A.Z.Y.) from a screenplay credited to Craig Borten and Melisa Wallack, follows Ron in his desperate, determined efforts to secure whatever drugs he can to treat the illness. First, he is only concerned about himself, then, after he seizes on the profit possibilities, he becomes committed to obtaining treatment for whoever can pay his going price.

Ron has a fierce instinct for survival, but he is not necessarily an admirable human being. He is brusque in his manner, and given to outbursts of anger. He is a raging homophobe. He has no interest in cultivating close relationships, and no patience for the shortcomings of others. Still, he is the protagonist. At some point, he will yield and mellow, at least to a degree; of this we have no doubt. 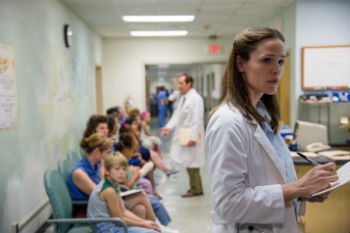 And so it is up to McConaughey and Vallee and the screenwriters to chart a path that is convincing, that will honor the memory of the man, and also impart some idea of the times in which he lived. What emerges is a simplistic demarcation between good (those who have HIV or AIDS) and evil (the FDA and the medical professionals who adhere to its regulations).

Once drawn, the line remains steadfast, and the only middle ground is granted to Dr. Eve Saks, played by Jennifer Garner with steely resolve and a sweet disposition. She is sympathetic to Ron's plight, though she refuses to compromise her personal integrity. Beyond her physical appearance, it's not made apparent why she remained on Ron's good side. Perhaps a little sympathy went a long way with him.

The film wages its own battle against accepted medical wisdom and the government, with Ron as its flinty leader, repeating bromides and repainting the line between good and evil. Jared Leto is enlisted as Rayon, a transsexual and fellow AIDS patient whose brains for business and positive attitude eventually soften Ron's knee-jerk hatred for gay people. Within somewhat limited parameters, Leto and Garner are on target in their emotional graduations.

Matthew McConaughey once again commands deep respect and full attention for his embodiment of a man whose basic resolve and views on life and death never change. Ron Woodroof remains determined to do whatever he wants, whenever he wants, and with whomever he wants. Inch by inch, though, without even realizing it, he makes room for the possibility that other people have something to offer him beyond drugs, sex, and alcohol: friendship.

The film opens in select theaters in the U.S. on Friday, November 1, before expanding in the coming weeks. Visit the official site for more information.