Review: CAPTAIN PHILLIPS, A Remarkably Rich And Thrilling Tale Of Piracy On The High Seas 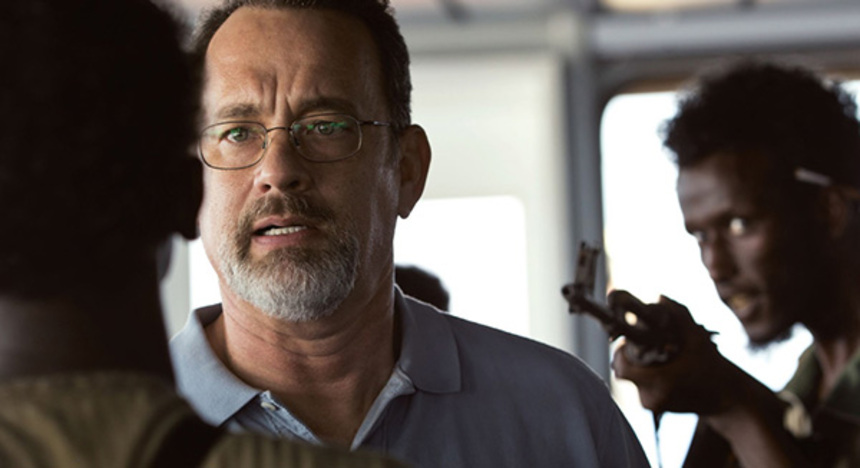 In April 2009, Captain Richard Phillips was aboard the MV Maersk Alabama, a container ship bringing supplies and donations to Kenya. Passing through international waters off the coast of Somalia, the ship was commandeered by a small band of pirates, who would eventually take over the vessel.

Many who follow the news know of what transpired after that initial incident, and any that have seen the trailer for the film have a pretty decent idea of the main brushstrokes of the story. It's to the filmmakers' credit that the movie doesn't rely on a lack of familiarity with the actual events in order to artificially invoke suspense. There are great moments of tension even if you know the entirely of the tale, a maritime drama that doesn't need any Cameron-esque titanic leaps in narrative in order to make the ordeal more cinematically interesting.

I must admit I sat a few rows back than I normally do for this screening, fearing very much Paul Greengrass' proclivity for shaky-cam demonstrated ably in his Bourne films coupled with a tale set in the roiling seas. As it turns out, the handheld photography is actually quite restrained, Barry Ayckroyd's lensing avoiding some of the more blatant camera tricks that too often are used in lieu of strong composition or careful lighting. The work manages to feel as stark as an documentary, but does wonders with light and shade, a lovely balance that's kept throughout the piece.

The ship itself, with its various nooks and crannies, is used to great effect. Its intricate levels are always coherently laid out with well-designed compositions and staging. Yet the tone never feels forced or formal, a really remarkable combination of looseness and specificity that very much helps with the film's success.

This balance in tonality is shred by Billy Ray's able script. This is no one-sided polemic, we get a set of rich characters from crew and pirate alike. Phillips is no otherworldly super hero, which of course makes his actual, very human heroics all the more laudible.

After several Oscars and a slew of other plaudits, it's still somewhat mind-boggling at times how perfect Tom Hanks can be in a film. This work showcases him at his best, right down to the final astonishing scene, which I think is among the finest of his entire career. It's good to be reminded of the caliber of performer this former Bosom Buddy has often proven to be.

Hanks is joined for much of the film by a remarkable ensemble, including the key Somali-born performers. Barkhad Abdi. the ostensible captain of the group, gives a nuanced performance, his penetrating eyes and sharp cheekbones pitted well against one of the finest Hollywood actors of this or any other generation. The intensity of the film is found not in cheap suspense but in the human drama wrought between Hanks, Abdi, and the other pirates.

There's not a false note in any performance, no sense of hyperbole or overly scripted moment. Yet at the the same time this is no dreary procedural, it's a drama of confrontation between wits and wills, and at 130+ minutes it's a battle that never feels over-long, never feels anything less than compelling.

By the time the big guns come on screen, the film manages to let this part of the story play out with similar restraint. Every time I feared jingoism, I was met with a cool pragmatism, once again making overt the implicit quality of the narrative without the need for explicit enhancement.

I am aware that another tale that treads similar ground, 2012's A Hijacking, will be held up in direct comparison. This Danish film is one that  that I now very much want to see (as if Todd's review didn't already provide sufficient encouragement), and while I'm unable to compare the two films at the moment, I believe from what I've read they are very different animals. I would suggest that Greengrass' is firmly within the broader "Hollywood" camp, yet never feels like it is trading spectacle for strong storytelling. From the way the ship is shot to the sensitivity of performance, I'd think it's a truly remarkable work, regardless of similar outings with which it may be compared.

Compelling performances aside, this is a rich tale that depends not on intricacies of plot but character interaction to provide its adrenaline thrills. Captain Phillips proves to be both a showcase for extraordinary performances, a truly mature work from Greengrass and his colleagues, and easily one of the best films of the year.