NYC Happenings: The Golden Age Of Spanish Horror At Anthology

Peter Gutierrez
columnist, critic; USA (@suddenlyquiet)
Tweet Post Submit
My dear NYC readers, that headline should be speaking volumes already. The Anthology Film Archives is featuring a cavalcade of films from Spain's horror heyday from October 30 - November 10. It's Must-watching no doubt, so our own Peter Gutierrez will now give you a taste of the what to expect at AFA -- Ben Umstead, East Coast Editor

Welcome to some great downtown programming for the Halloween season: a lineup of crowd-pleasers that's just artful enough and just B-movie-ish enough to satisfy on all the levels that count. In fact, five years ago I did see the Paul Naschy vehicle The Werewolf Versus the Vampire Woman on a big screen a few blocks from the Anthology, and the East Village audience did love it. (By the way, Naschy is also represented here by Count Dracula's Great Love and his own The Craving.)

Another film that needs little endorsement--it's been widely rediscovered during the past decade's zombie craze--is Jorge Grau's Let Sleeping Corpses Lie. Yet while it's clearly a must-see for horror fans, how often do you get to catch it in 35mm, which is how all these films are being presented? And thank goodness for that, as this is exactly the way you want to experience something like Narciso Ibáñez Serrador's utterly exquisite La Residencia (aka The House That Screamed). So gorgeous, so gothic, and so gorgeously gothic, it's a film that one wishes were better known. Its lack of stature may be partly due to the would-be shock ending, which somehow manages to feel both predictable and random. However, there's so much more going on here in terms of cruel atmospherics and institutionalized evil that narrative almost becomes a secondary consideration. In the end the most shocking thing may be how, for a film set in an all-girls boarding school, La Residencia foregoes the exploitation touches one might expect: even a group shower scene takes pains to avoid lewdness. 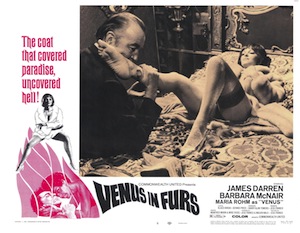 That same restrained approach can't be said to characterize Amando de Ossorio's Lorelei's Grasp (perhaps better known as When the Screaming Stops). What starts as a super-sleazy exercise in nudity and gore, often combining the two in close-up, gradually takes on the form of a romance... and not just a run-of-the-mill romance either, but a mythical, metaphysical one. In short, an astounding--and unforgettable--Trojan horse of a movie. It may not be news to you that the same director also made a series of films featuring the undead (and unseeing) Knights of the Templar, or that many feel that Night of the Seagulls is the standout among these. Often gloriously boring, and featuring two main characters who are comically stupid, the film casts a spell such that eventually none of that seems to matter. The fact that the Crusader mentality can distort itself into worshipping a Lovecraftian deity (à la Stuart Gordon's  Dagon) is as unnerving as the slo-mo shots of their horses galloping in the surf are otherworldly. Yet such evocative imagery is almost commonplace in the effortlessly oneiric Venus in Furs. Am I courting controversy by calling it Jess Franco's most accomplished film? Maybe. With an ethereal doppelgänger that kinda recalls Vertigo, Venus in Furs also sports the psychological storytelling and revenge-structure of classic Japanese kaidan.  Never has the swinging '60s been so baroquely unsettling.

Finally, in a series noted for its weird grandeur, the surprisingly cosmic ambitions of Horror Express [our headline picture-- ed] are right at home. Featuring both Helga Liné and Silvia Tortosa from Lorelei's Grasp, Eugenio Martín's film has been available on the Internet Archive and elsewhere online for some time now. So it could be that we now take it for granted, perhaps viewing it as a "lesser" Cushing-and-Lee effort. Such an assessment, though, would tend to obscure its unique and deceptively profound charms. As much sci-fi and mystery as it is horror, it's a film whose grand themes bring to mind Conan Doyle's timeless Professor Challenger stories. Simply not to be missed for connoisseurs of the fantastic.

For more info and to purchase tickets to The Golden Age Of Spanish Horror at AFA, click right here.

Do you feel this content is inappropriate or infringes upon your rights? Click here to report it, or see our DMCA policy.
anthology film archivesjess francolet sleeping corpses liespanish horrorvenus in furs