F The Whales, Help Save The Tower Theater In Salt Lake City! 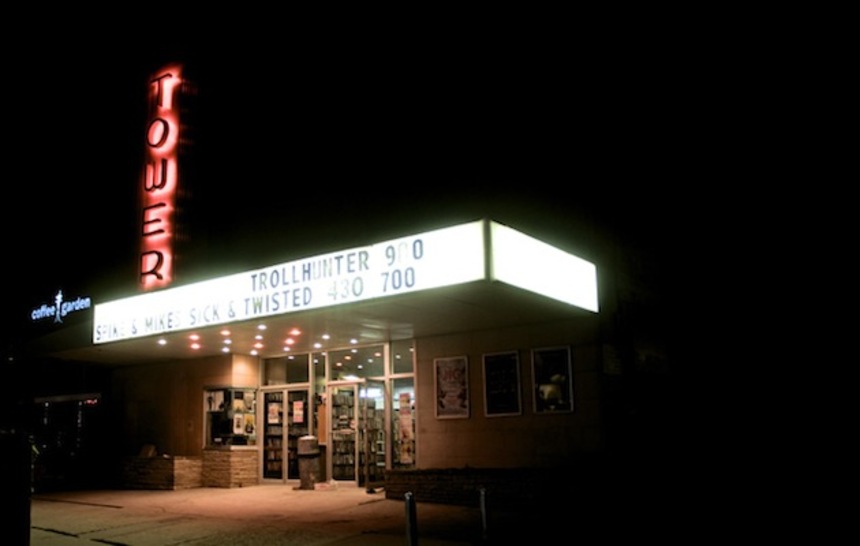 When I first moved to Salt Lake City a year ago, many of my friends and cohorts lamented the fact that a cinephile like myself was not going to be in a major market area, where seeing something besides the latest Transformers sequel or fart-humor comedy would be an impossibility.

This was far from the truth though, and after meeting some of the fine folks at the Salt Lake Film Society, quickly found out about theaters like The Broadway in the downtown district. In an area called Sugarhouse, which is a quaint and picturesque neighborhood rife with independent record shops, coffee houses, a wonderful used bookstore, is the wonderful and venerable Tower theater. It's 80 year existence is now in serious danger as the staff and management scramble to raise funds for the mandatory conversion to digital threatens this church of cinema to close it's doors for good.

I was lucky enough last night to attend a casual after hours screening of John Landis' classic American Werewolf In London by one of it's employees James Ramirez, and hadn't heard of the troubles until we were standing around post-screening basking in the glow. Needless to say I was completely deflated by the news, so in a grasping at straws hope that some benefactor out there with deep pockets see's this I'd like to point the readers of ScreenAnarchy at the Kickstarter campaign that is in it's final days.

It kind of blows me away that in an area that supports an event as massive as the Sundance Film festival, a historical theater like the Tower would be allowed to capsize, and sink into the depths of the memories of the local film community, which again it has served for 80 years.

Let's help get this old girl a new dress people. Maybe you love arthouse films but live out of the area, or are a film maker who has had their work screen there during Sundance or as part of the theater's adventurous programming. Whoever you may be, I hope that you love old venues like the Tower as much as I do and can see your way to putting 5 on it so the doors can stay open.

The campaign ends Oct. 8 and they are a long way from their goal, so the trumpets are blaring, the S.O.S. sign burns bright, and the flares are going up into the sky.

Please help save the Tower Theater in Salt Lake City by going HERE to donate.

Do you feel this content is inappropriate or infringes upon your rights? Click here to report it, or see our DMCA policy.
salt lake city utahtower theater