Destroy All Monsters: The Poisonous Dread Of A NIGHTMARE ON ELM STREET 3 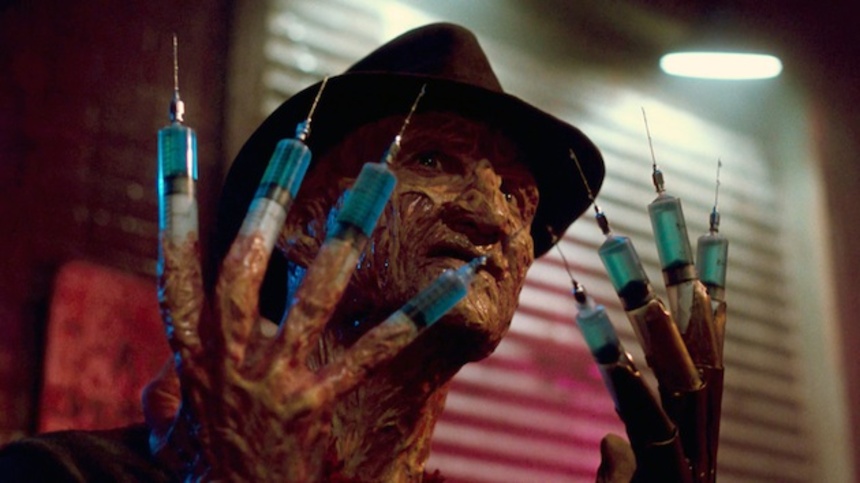 Mine was A Nightmare on Elm Street 3: Dream Warriors. My first horror movie. The one that got pulled out of a Videoflicks hardshell rental case at the mid-October birthday party of some Grade 5 classmate whose name I've forgotten, and proceeded to scribble madness all over my psyche in a way that never entirely healed. We all remember our first time, sure; but I doubt many devirginizations are recalled with this kind of detail.

I could cite the nightmare imagery from that film, chapter and verse, for years afterwards; when I finally caught up with Nightmare 3 on DVD decades later, I was amazed at how completely my memory remained intact. Seriously: sex, whatever. But a guy getting puppeteered with his own ligaments, in the corridors of a creepy insane asylum? That shit stays with you for life. That scene in particular is a feat of body horror (and exceptional makeup effects) so comprehensive that it still makes my head spin; and it's but a fragment of Nightmare 3's ceaseless barrage of bad dreams.

Every horror movie is in its way a nightmare about puberty, and that's what Nightmare 3 was for me, a nauseating and enthralling mirror-window into the coming teenage years and everything you Weren't Supposed To Do, writ large in PSA-style block capital letters. There was Taryn, the drug addict and wannabe punk, whose previous indiscretions come back to haunt her in the film's most potent image, as Freddy grows syringes for fingertips and attacks her. There was Will, the suicidal Dungeon Master, whose leap off a rooftop had turned him quadriplegic for life but hadn't shattered him of his D&D-driven delusions of being, in fact, a wizard.

The Nightmare on Elm Street premise, of course, remains the strongest in the history of slasher movies by dint of its pure, insidious connection to the natural biproduct of staying up late and watching movies you're not supposed to be watching at the age of twelve: the nightmares. Freddy's nightmares are the dreams that can follow you into awakeness: the faucet that grabs, horrible claws sprouting from porcelain sinks and dusty televisions to snatch young women and pull them to their doom. This full-throated reversal of the natural order of things - from "it's just a dream" to "no it's not" to "the nightmare is your life" - is given horrifying added pique in Nightmare 3, when the manifestations of the Freddy dreams tar each of the principal characters with a new level of nightmare, by having them misdiagnosed as suicide cases. Kristen grapples with a sink that grows skeletal arms and slashes her wrists, but when her mother bursts into the bathroom and the nightmare dispels, Kristen's just another blonde teenager with sympathy slashes across her wrists, crying for help. Except, as we know, she's not.

Kristen's mom is one of the true nightmares of the piece, anyway, a glam-haired harpie representing the very 1980s spectre of divorce. She's the parent who won't listen to her child's stories of victimization until it's too late, because the latest dimwit mommy's brought home is downstairs, and wants some bourbon (and sex). In my mind, there's a weird connection between Kristen's mom and the death of one of the other principal characters, Jennifer, who watches Zsa Zsa Gabor being interviewed on the Dick Cavett show on the mental institution's TV, before Cavett stands up and attacks Gabor with Freddy claws, barking "Welcome to prime time, bitch!" before he eviscerates the wannabe actress who is watching in horror. I remember the roar of appreciation from my circle of friends on the last shot in the sequence, where Jennifer dangles by the head from the smoking remains of the wall-mounted idiot box. Indeed: Zsa Zsa Gabor, dimwitted goddess of the television, is one hell of a bad mommy.

Even Freddy has mommy issues this time around. The demonic manifestation of a child molester burned alive is given the rest of his backstory when the ghost of his mother shows up, describing how she was accidentally locked into the criminally insane wing of the mental institution when she was just a teenager, and gang-raped for days before she was found - and found pregnant. "The bastard son of a hundred maniacs," she says of Freddy, with the kind of throbbing-boner piquancy that only an '80s slasher movie can provide. She reveals the location of Freddy's remains to a crusading young psychiatrist, who digs them up in a junkyard and does battle with the monster's reanimated skeleton, Jason and the Argonauts style, to finally (but not, of course, finally finally) dispel Freddy's manic potency.

The inventiveness of the movie's diegesis - the fact that you never know if what you're seeing is meant as real, dream, or some horrible canyon in between - is endless, and is further layered on top of the mental institution formula to create an added instability that shook me, and still shakes me, down to the core of my mortal soul. But it's here, thanks to that mental institution, that Nightmare 3 turns away from its brethren in the slasher genre and becomes something else.

As we all know, the traditional slasher tends towards a thinly-veiled right wing retribution fantasy, in which untoward youthful urges are punished in extreme recapitulations of the indiscretions themselves. (Sex buys you a good fucking with a long steel knife.) In its choice of subject characters, Nightmare 3 might seem to be no different. But this is no horror movie, at least not in those terms. Nightmare 3 is a power fantasy for the most deeply marginalized, deeply "broken" teenagers in its particular view of society (and per the best entries in the genre, for teenage girls particularly). Sure, mute mental patient Joey gets lured into Freddy's final maze because he wants to have sex with the big-titted blonde nurse, who shows him (and us) those very big tits before engaging in a French kiss that could put young men off the practice for the rest of their lives. (Notably, this sequence doesn't result in Joey's death - but it does position him, not one of the girls, as the damsel to be rescued.)

In order to rescue him, the other characters become truly inventive, and so does the film. Having harvested the capital of nightmares to make the first Nightmare on Elm Street a grandly effective scary movie that followed you home to your bed, Wes Craven and his cohorts turn the dial back the other way to pick up the rest of the money on the table with Part 3, by way of directed dreaming. The teenagers learn to unlock their ideal selves in the dream space - anticipating The Matrix by well over a decade - and suddenly, the threat that gives Freddy, and the movie, power (the helplessness of falling into sleep) is reversed to re-empower the children (in dreams, power is limitless).

Suddenly, quadriplegic Will can walk and use magic; recovering addict Taryn has a mohawk, switchblades, and untapped reservoirs of confidence; obstinate Kincaid has muscles that match his mouth; and Kristen, whose power to draw everyone into the same dream (coupled with her pale hair) makes her seem like a White Witch, can do Catwoman gymnastics off walls and ceilings. The last half hour of the film is pure phantasmagoria, as each of the characters - united in Freddy's dreamworld at the outset of the third act - each enter recapitulations of their own private nightmares, and face them down.

Unprecedented for this kind of movie, four of the principal characters survive - though sadly, original final girl Nancy, and wonderful, delectable Taryn, are not among them. But perhaps this is the reason A Nightmare on Elm Street 3 crossed the boundary line for me and my friends from being the horror movie that broke our collective cherries, to being a campfire story that nearly attained the status of myth. Way down there at the far margin of teen society, in the halls of a shadowy insane asylum, the zip-heads and basket cases whom we were told were the outcomes of every conceivable bad choice in the teenage years to come, turned the tables on the bogeyman in his home turf and brought their power back to the real world. That doesn't sound like a horror movie to me.

Do you feel this content is inappropriate or infringes upon your rights? Click here to report it, or see our DMCA policy.
A Nightmare On Elm Street 3: Dream WarriorsWes Craven