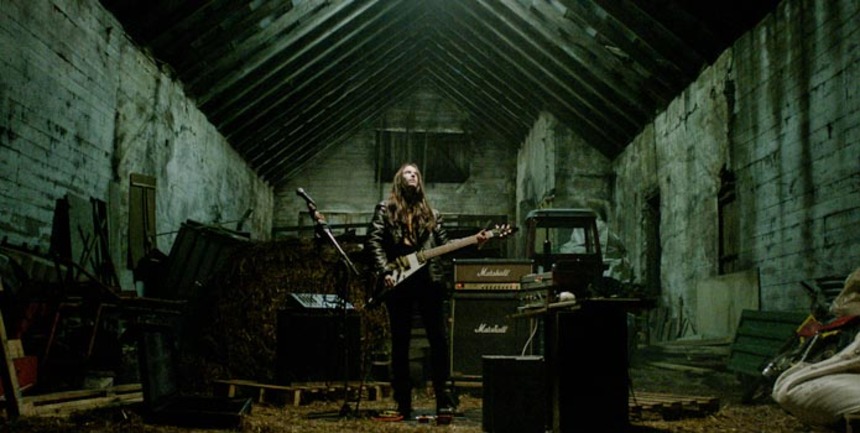 A powerful portrait of grief never dealt with - of grief so powerful it likely never can or will be dealt with - Metalhead is the film that will very likely finally draw the sort of attention to Icelandic director Ragnar Bragason that he deserved to receive four films ago. The simplest way to put it would be to say that Bragason is the director most likely to follow in Baltasar Kormakur's footsteps and cross over into larger international success but while that's true it also somewhat diminishes Bragason's own unique voice.

At the core of the film is Hera, a girl growing up in a remote rural area of Iceland on a dairy farm. As a girl Hera witnesses her beloved brother Baldur - a long haired heavy metal fan - killed in a horrific accident and the experience simply never leaves her. In many ways it is as though Baldur himself never leaves her and she becomes emotionally trapped - caught between the life that took her brother and her own inability to strike out on her own for fear of losing the only connection - her home - that she still has with him.

Instead of moving on Hera remakes herself. She takes on Baldur's wardrobe, his black t shirts and leathers, takes up the guitar and channels her anger into a stereotypically abrasive, in your face attitude that masks - but only just barely - the fact that she is lost within herself and sinking fast. And it's not just Hera who's going down. Though her parents are more successful at putting on the polite facade the entire family is lost in their pain, each trapped in their own isolation.

Bragason tells the story of Hera and her family with a caring, incisive touch. Bragason is clearly an actor's director and he draws such a strong performance from first timer Thorbjörg Helga Dýrfjörd as Hera that it's a virtual certainty Bragason's fearless lead will have offers coming in from around the world in very short order. An impeccably crafted and beautifully performed film, Metalhead is a tiny gem very well worth seeking out.