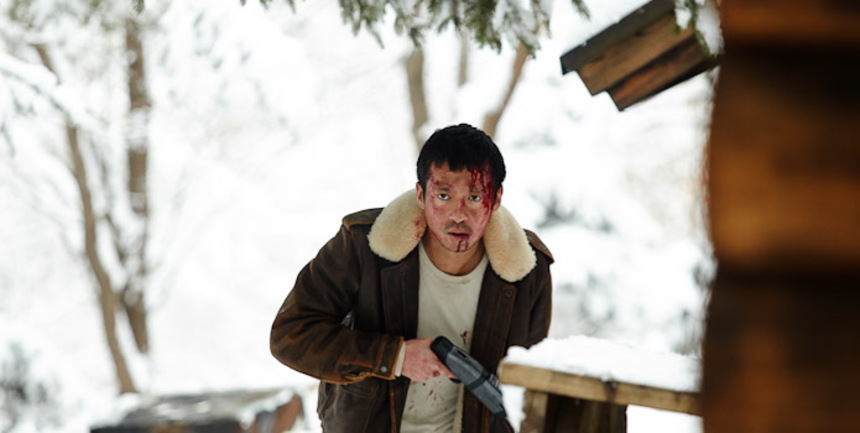 If ever there were a film that demonstrated the importance of cultural context when unraveling meaning ... well, there are lots of films that demonstrate this, honestly, and Noh Young-seok's Intruders is very definitely one of them. It's such a significant issue here, in fact, that it seems likely that viewing Intruders through purely Western eyes will likely yield a radically different - and significantly more perplexing - experience than that intended for the Korean audience.

The story itself appears quite simple on the surface. Jun Suk-ho plays a young screenwriter going on retreat, traveling up into the secluded mountains to find the peace and quiet he needs to complete his latest work. On the way he makes a very unusual friend (Oh Tae-kyung) who casually offers up how great it is to be able to talk to a real person again after having been freshly released from prison and time in solitary confinement. Want to have a drink?

Clearly this quiet retreat is not going to go as planned and, sure enough, soon the unwanted guests begin to add up and serenity is well and thoroughly shattered as the visitors make the rapid transition to corpses and, good lord, has our ex-con friend gone off the deep end?

And here is where it becomes clear that the grid audiences approach Intruders through will have a radical impact on their appreciation of the film. Because (and I must warn here that spoilers will follow) if taken purely on the surface level of a Western style dark comedy of errors - which is very much how it sets up with director Noh working those tropes to great effect early on with his delightfully odd and understated characters - Intruders is going to disappoint and disappoint badly. If viewed this way the mid section is weirdly bloated, a pair of sequences padded out with lengthy conversations that don't go much of anywhere, and the film's conclusion - which comes abruptly just as our mild mannered lead is about to steel himself for a confrontation with the actual killer amongst the group - comes so sharply and at such an unusual juncture that it feels that the film is really only half a film, that it simply stops just as it reaches what should be the key turning point that shows us our main character's transformation and leads us to a rousing end.

This was, it should be said, one hundred percent my reaction while leaving the theater. It's half a film. Why would Noh do this?

The answer, simply, is that he's not making it for me or for people like me and what I took at first to be a simple (though quite dark) comedy of errors is actually quite a sly political and social satire aimed squarely at the Korean audience. The point is not to see our lead adapt and grow and triumph - as would be the case in a western film - the point is that the entire cast is entirely self absorbed in their own ways, caught up in their own petty issues, and dismissive of the clues scattered through the news reports from the very beginning that something is up in the North until it is far, far too late and the North Korean spy who has stumbled across their quiet retreat has already killed most of the group while the survivors squabble amongst themselves. Whoops.

What reads as bloat from the western viewpoint is actually very much part of the point, as is the abrupt end because what matters is not whether or lead survives or not but that his own fixation on trivialities has put him in a position where he very well may not.

After winning a great deal of love with his debut feature Daytime Drinking, Noh proves here that his early success was not a fluke nor a flash in the pan. He draws exceptional performances out of his key cast, shoots beautifully compelling film, is gifted with a dry wit, and is a writer willing to make bold and challenging choices. Intruders is unlikely to find the same sort of audience abroad that Daytime Drinking did but it is certainly a worthwhile experience.