Santiago 2013 Review: KARAOKE GIRL Triumphs As A Fiction, Fails As A Documentary 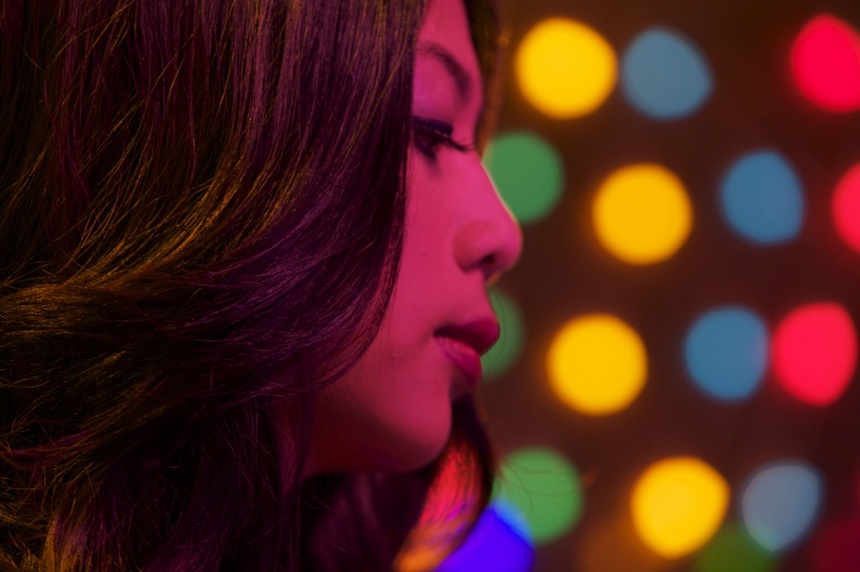 There are many people out there who may be bigger experts on what is the nightclub culture in Thailand, but I guess that I can still have an opinion on the subject, just from what I've learned in this movie, that was part of the main International Competition at the SANFIC, Santiago Film Festival.

I can say that I've learned something about this subject because the movie mixes the languages and stylistic approach of fiction and documentary filmmaking. Karaoke Girl wants you to understand from pretty early on that this is more a fictionalization of facts documented in situ at Bangkok.

So, from what I could gather of the film, there are many karaoke places in Bangkok, in which many girls serve drinks, but at the same time you can pay these girls to actually sing a song from the karaoke machine, and this makes sense. Since they all have beautiful voices, you have to spend some money to see the talent. Still, that doesn't seem to be the only business going around, as they also serve as escorts whenever the clients find them enticing enough for their taste.

The protagonist of the film is Sao, an actual Karaoke Girl (the technical term for the girls who work at the karaoke bars) that also uses her own family and experiences to make the film more real and exciting for us. There is a main problem with this movie regarding those elements, as you seem able to detect the realism behind the scenes and the emotions that the protagonist goes through. Yet there are segments of the film, as when our protagonist leaves Bangkok to visit her family, in which it turns into a documentary.

Don't get me wrong, I love documentaries, they are maybe the most exciting 'genre' (if you could call it that) in which to work in film nowadays, at least from my perspective. But the documentary bits turn into a very basic and almost boring series of scenes that tell us nothing about the main character, other than her humble origin and beautiful shots of the countryside in which she used to live. This has no actual weight regarding the rest of the circumstances that happen to her in the rest of the film.

Yet, whenever we get away from those bits, it becomes one of the most emotionally involving experiences, with a great eye for a night cinematography that makes our protagonist a beautiful character, and the night scene of Bangkok maybe one of the most beautiful city landscapes seen in a long time.

I wish there was enough material for the fiction bits of the film to be more interesting, especially because we feel the real sadness of not being able to be in a stable relationship, due to her work, and how her dreams could never become true. The final sequence is maybe one of the best scenes of the year. If you can see it at a festival and you find yourself interested in the plot points or the style mentioned, give it a look. It's barely 70 minutes long.