Review: THANKS FOR SHARING Seeks Sympathy For Sex Addicts

Are you a sex addict? Do you know a sex addict? Would you like to know more about the subject, but wish someone would make a movie about it, rather than publish another book?

According to Stuart Blumberg's new film Thanks for Sharing, sex addicts need understanding and support, just as much as someone who is addicted to alcohol or narcotics. Even more so than the often-pictueresque Manhattan locations, sexual addiction forms the landscape against which a three-pronged story plays out, as three generations of men deal with the life-long consequences of their addiction.

Blumberg, making his directorial debut, also shares a screenplay credit with Matt Winston. The world that he's created is, for the most part, a kind and lovely and well-heeled Manhattan, in which the three men and their friends, family, and associates can work out their personal issues with dignity, class, and humor. (Yaron Orbach's cinematography is gorgeous.) Back in 2000, Blumberg's script served as the basis for the delightful Keeping the Faith, which also focused on three people working out a thorny romantic issue with religious overtones.

This time, however, Blumberg is preaching to the converted. Apparently, the film does not want to give any credence to naysayers who might question if sex addiction should be treated the same as alcohol or narcotic dependency, so any doubts are acknowledged in one or two lines of dialogue and then dismissed out of hand. OK, fine, but that leaves us with a straightforward regurgitation of recovery themes among well-to-do and well-established people. There is little effort to establish characters who exist apart from their addiction; according to the film, they are entirely defined by their sex addiction and deserve sympathy because of their affliction. 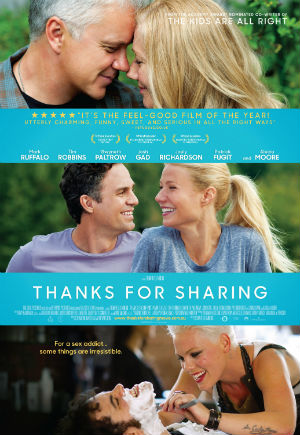 Again, fine, but that doesn't mean the movie as a whole automatically earns a pass because of its good intentions. One of its irritating assumptions is its insistence that only the three main characters are worthy of consideration. So when Adam (Mark Ruffalo), who has just marked a multi-year anniversary of abstinence, flirts with Phoebe (Gwyneth Paltrow) at a party, and they sit down to talk, we never learn what they have in common -- beyond their physical appearances -- because Blumburg dubs music over their conversation. Without that foundation established, their subsequent sexual activity, and Adam's sin of omission when Phoebe mentions that she would never again date an addict, feels entirely contrived, straight out of the romantic comedy playbook.

It's similar for Mike (Tim Robbins), Adam's sponsor, who has more years under his belt free from his sexual addiction than the others and is always ready to help others, yet is immediately and angrily suspicious of his adult son, Danny (Patrick Fugit), also an addict, when he returns home seeking reconciliation with his parents. (Joely Richardson plays the wife / mother.)

And it's similar for Neil (Josh Gad), an overweight doctor with an overbearing mother (Carol Kane) and a serious addiction to frottage and things like shooting up-skirt shots of his (female) boss. Of course it costs him his job at a hospital. Of course he's not worried about paying his bills after he loses his high-paying job. Of course he's attracted to Dede, the rare woman who shows up at the recovery group meeting. (Of course Dede is enacted awkwardly by Alecia Moore, better known as singer / musician Pink.) Of course he's the one who starts to get his life together while his sponsor Adam, and Adam's sponsor Mike, start to fall apart.

Eventually, it begins to feel as though the movie is tugging at your elbow, repeatedly begging, "Love me! Forgive me! Love me! Forgive me!" And maybe I would, well-intentioned and overly earnest movie, if you let me get to know you better from the beginning instead of playing all these games.

Thanks for Sharing opens wide in theaters across the U.S. on Friday, September 20. Visit the official site for more information, including theater listings.