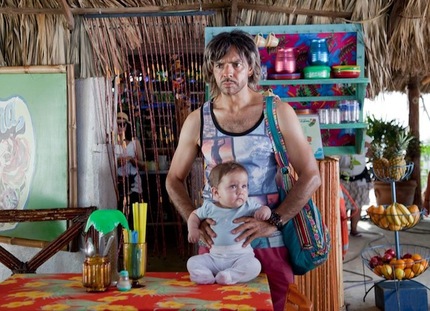 Eugenio Derbez was once an irreverent television comedian. At least that's how I recall him from the time I was growing up (the nineties), watching stuff like Televisa's coverage of the 1998 FIFA World Cup with Derbez mocking the serious soccer commentators or doing sketch comedy. It's material that for a kid might be hilarious and daring but that's really too dumb and simplistic to hold up nowadays as comedy gold.

The fact that Derbez's directorial debut Instructions Not Included (aka No Se Aceptan Devoluciones) is full of lazy jokes doesn't strike as a surprise at all. He has been indulging the same formula for more than a decade with his foolish persona, achieving one of Mexico's most famous/ b eloved television series with La Familia P. Luche and eventually getting along with such Hollywood stars as Adam Sandler and Rob Schneider. Unfortunately, though not unexpectedly, Instructions Not Included is in the vein of Sandler's laziest and sappiest works, as it's unfunny and, at the same time, tries too hard to be something much more profound than average.

The first part of the movie has Derbez pretending he's like Charlie Sheen/Harper through his character Valentín, a Mexican playboy who enjoys the Acapulco beach and the company of many foreign women. If you have seen the trailer you have seen the entire movie, so you know this playboy will be surprised by a woman who claims he's the father of her baby girl, and that announcement will forever change him. From this basic and formulaic premise, Derbez constructs something very disjointed, taking time for his regular routine of jokes and even some friend's cameos ("Sammy" and Jesús Ochoa).

Never incoherent are the marketing decisions though, taking the story from Acapulco to Los Angeles, illegal immigration sequence included, to reach a very specific audience in the United States. It's a fair business move but adds nothing to a film that can't be seen as a take on Mexico's relationship with its northern neighbor. If the protagonist's daughter is American is solely the pretext, and if he lives the American dream is in an almost unconscious way and due the most absurd reason. One can't ask Derbez for a serious look at immigration but then again, he ends asking himself for a serious approach to a comedy.

Instructions Not Included is at heart as silly as Sandler's Grown Ups 2. The movie screams at you "don't take me seriously, I'm stupid" with scenes featuring Valentín knocking out his daughter with a soccer ball or acting as the stuntman of a Johnny Depp lookalike. Derbez uses the film's opening sequence, with young Valentín learning a life lesson from his father (played by the real Hugo Stiglitz who, by the way, once called Tarantino an usurper), to not make look gratuitous the comedy show that will follow. Sure, there's a "logic" explanation to Valentín becoming a successful Hollywood stuntman, but who cares if the stunts-related moments are nowhere near funny?

As you can tell, the central element of the film is the father-daughter bond, with Loreto Peralta as Maggie, the once baby girl abandoned by her mother. To be fair, Derbez had everything for a decent if unoriginal drama, with Peralta being cute and himself not acting so ridiculously terrible once the playboy attitude (and his horrible "blond" hair) is gone. Little by little, the film tires you for the simple reason that it announces the dramatic conclusion early on but keeps avoiding going straight to the point. It should have been a little 90-minute entertainment, with its funny and touching bits, but it's overlong (2 hours), having an unnecessary Derbez sketch in the middle of all the drama, for example. It's simply an unsuccessful mixture of genres, with cheap and repetitive humor that makes you want to cry and sappy turn of events that make you want to laugh.

The final note indicates that with Instructions Not Included, Derbez tried to give us real meaningful cinema about parenting, loss and life, but the reality says he should learn to create one that doesn't relies on a final speech to convince the audience that it actually has something to say.

Instructions Not Included opened in Mexico on Friday, September 20.

Do you feel this content is inappropriate or infringes upon your rights? Click here to report it, or see our DMCA policy.
Eugenio DerbezInstructions Not IncludedNo Se Aceptan Devoluciones