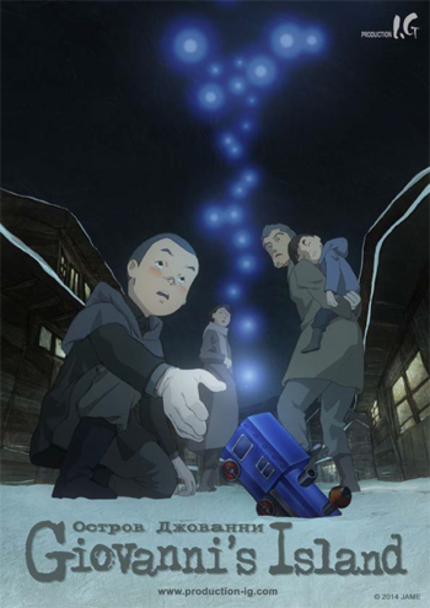 There is a lot to be excited about in regards to this announcement about the next Prouction I.G project Giovanni's Island. One, Nishikubo Mizuho , Oshii Mamoru's long time animation director is taking the helm on this one. Second, it is going to be hand drawn! I think this is tremendous news and in this day of digital animation it is akin to your dad throwing an LP on the turntable. I am sure it will be digitally assisted in some sense but to get animators creating and not manipulating warms my heart.
Here is the full press release...

Production I.G Announces New Anime Feature Film
GIOVANNI'S ISLAND
Tokyo-based animation studio Production I.G announces GIOVANNI'S ISLAND (original title: Giovanni no Shima) a new hand-drawn animated feature film directed by Mizuho Nishikubo, Mamoru Oshii's most trusted animation director. The script is penned by Shigemichi Sugita (Kita no Kuni kara / From the Northern Lands) and Yoshiki Sakurai (Ghost in the Shell: S.A.C.).
GIOVANNI'S ISLAND is presented by the Japan Association of Music Enterprises (JAME) to celebrate its 50th anniversary, and it is planned to be theatrically released in Japan early spring 2014 by Warner Entertainment Japan. Production I.G is handling international sales worldwide.
STORY
In the aftermath of the most devastating conflict mankind had ever experienced, the tiny island of Shikotan became part of the Sakhalin Oblast... and on the unhealed border of this remote corner of the world, friendship among children from two different countries timidly blossomed, striving to overcome language barriers and the waves of history. Inspired by true events.
On August 15th, they told us we had lost the war.
At that time, we did not really understand.
Then one day, everything changed.
Many soldiers, wearing uniforms we had never seen before, arrived on the island.
That was the day I met Tanya.
MAIN STAFF
Presented by: Japan Association of Music Enterprises Original Story: Shigemichi Sugita (From the Northern Lands) Screenplay: Shigemichi Sugita , Yoshiki Sakurai (Ghost in the Shell: S.A.C.) Director: Mizuho Nishikubo (Musashi) Animation: Production I.G (A Letter to Momo, Ghost in the Shell)
ABOUT THE DIRECTOR: MIZUHO NISHIKUBO
Born in 1953. A longtime and most trusted collaborator of Mamoru Oshii, Nishikubo has worked as animation director under his real name of Toshihiko Nishikubo in most Oshii's animated films, including "Ghost in the Shell" (1995), Palme d'Or-nominee "Ghost in the Shell 2: Innocence" (2004) and Golden Lion-nominee "The Sky Crawlers" (2008). It is said that Oshii's movies wouldn't look the same without his contribution. His credits as director include, "Video Girl Ai" (1992, OVA), "Otogi Zoshi" (2004, TV series) and "Atagoal: Cat's Magical Forest" (2006, movie). He also directed the music clip "Tsepi i kol'tsa / Chains & Rings" (2003) for Russian rock star Linda, and the internationally praised NEXT A-Class commercial film for Mercedes-Benz (600,000 views on YouTube in 3 days). His latest feature film, "Musashi: The Dream of the Last Samurai" (2009), written by Mamoru Oshii, screened in Locarno, Sitges, Warsaw, Stockholm and Vladivostok.
ABOUT THE SCRIPTWRITER: SHIGEMICHI SUGITA
Born in Toyohashi, Aichi Prefecture, in 1943. A multi-awarded director, scriptwriter and film producer, he is probably best known for directing the hugely successful Hokkaido-set TV drama series, "Kita no Kuni kara" (From the Northern Lands), that started in 1981 and ran for 21 years, spanning one season and several specials, with audience share peaking 38.4%. He directed a number of other popular dramas (including "Shonen H / A Boy Called H", from the award-winning novel by Kappa Senoo) and three feature films, namely "Yushun - Oracion" (1988, from Teru Miyamoto's novel), "Last Song" (1994), and Japan Academy Prize-winner "Saigo no Chushingura" (The Last Ronin, 2010). He is currently chairman of the All Nippon Producers Association and President & CEO of Nihon Eiga Satellite Broadcasting Corporation.
ABOUT PRODUCTION I.G

A quick read on Shikotan and Sakhalin Oblast suggests that this story takes place at the tail end of World War II. Russia and Japan still claim the island of Shikotan though it is administered by Russia. This would suggest that the children will be Japanese and Russian.
Tweet Post Submit