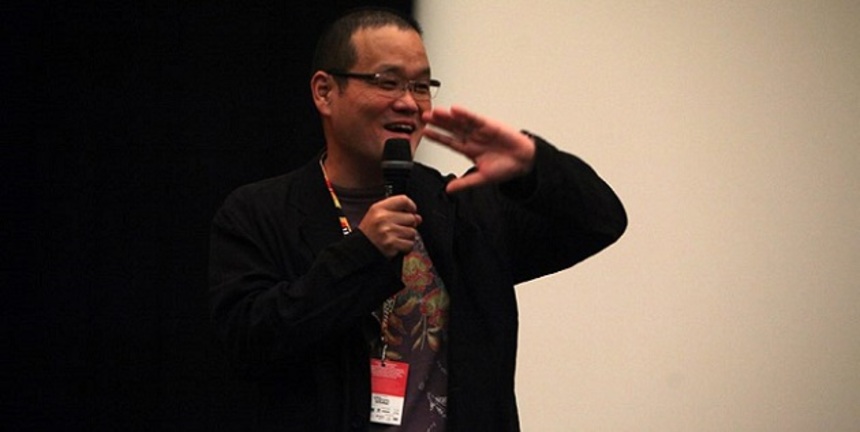 In its seventh edition, the modest yet increasingly interesting MOTELx festival continues to reserve a very special spot in its genre-savvy program for Japanese cinema. This year, an entire section is dedicated to the man who, in a way, launched J-horror as we know it: Nakata Hideo.

The Portuguese festival prepared a short but essential retrospective of his work, screening his three best-known films - Ringu, Dark Water and Chaos - in addition to his most recent film, The Complex. In an interesting bit of karma, Nakata was the second of two honorees, the other being Tobe Hooper (in the "Living Masters Cult" section),whose legendary ghost film Poltergeist would directly influence the novel that would be adapted into ... Ringu.

Twitch sat down with Nakata-san in Lisbon for a few minutes, where he spoke of his newest film and his career. Mild spoilers going forward.

ScreenAnarchy: How would you categorize and situate THE COMPLEX in terms of your career and the way it's evolved?

Nakata: Well, in the promotional tour for The Complex I've called it the reaching point of my whole career, after I made my directorial début some years ago. I have not just directed horror, but the horror is the genre that allowed me to travel -- to Hollywood, to the UK, and here. Without Ringu I wouldn't be here so I really appreciate it. After seven years of absence from the genre I wanted to explore the modern Japanese urban life. When I was living in an apartment I wouldn't say anything to my neighbours, and that's fine. People are isolating themselves but at the same time those lone souls are trying to get together. That's the kind of realistic, sad horror movie I wanted to make. A little in the vein of Dark Water, but also the Swedish horror vampire film Let the Right One In.

Most of your films have always seemed quite restrained to me. But THE COMPLEX feels a little larger and broader. There are certain parts of the film, especially in the final third, which become a little over-the-top, not necessarily in a bad way. Would you agree, is that something you planned for?

Yes. Horror should be something larger-than-life. The old man's death, the olden, the ghost phenomenon. The boy is linked to the old man's ghost -- the way he looks or where he's sucked into. And yeah, it's a sort of ridiculous way to find and reach the climax.

It draws a little from the old school Japanese horror, with the face paint and...

Yeah, yeah. It was colored lighting, actually. But yes, either old Japanese horror or Italian gothic horror, they used colored lighting very much. And also, I made a reference to the DP and the writing director - there was a fine arts TV program in which I appeared, like a Japanese version of the BBC, and I went to draw a replica of The Scream. And that painting has such interesting color - red, golden, silver... and that kind of vivid color usage was our intention.

One of the most common denominators of your work is the presence of children - RINGU, DARK WATER and now THE COMPLEX. Do you feel like they're an effective means to explore concepts like fear and the supernatural?

Well, Ringu and Dark Water were adaptations of novels, the children were already there. But yes, The Exorcist, The Omen... a lot of good horror films have children. I think that has something to do with the theme in general. They don't have to rationalize the supernatural phenomenon in terms of the sub-conciseness. For example, the boy [from The Complex] -- it's been six years since he was born from an unknown world, from nothingness. It feels natural to me that they have a tendency to accept a subconscious world more easily, so that makes the presence of children in a horror film more real and effective.

THE COMPLEX comes after what seemed to be a deviation in your career. You made CHATROOM in the UK, and your recent Japanese films haven't had the same impact as some of the earlier ones. Do you think this film represents some sort of "return"?

I feel relieved. The Complex was a success in the box-office in Japan and reached the young audiences - kids in elementary school wanted to go and watch the film after school. The production team actually offered me the chance to make another horror film, not a sequel, and the project started already.

We tend to see Japanese - even, Asian - horror cinema as a very special and unique brand of horror. Do you think the Japanese - or you in particular - see western horror in the same light?

Not really. We influence each other and yeah, Asian or Japanese horror became very popular in the western world in the last ten years or so, but at the same time we are definitely influenced by a lot of American and European horror, so it's like a baseball. It goes back and forth.

How about you, do you have personal influences in cinema - films or filmmakers who've particularly inspired you?

When I started working in movies, French film director François Truffaut or British filmmaker David Lean were the two directors whose names I remember very early on. And then there was Sam Peckinpah and Clint Eastwood. I don't know, I watch too many movies.

Who are your favourite filmmakers working today?