A Talk With THE COMPLEX Director Nakata Hideo. Part 1 of 2: Does He Believe In Ghosts? 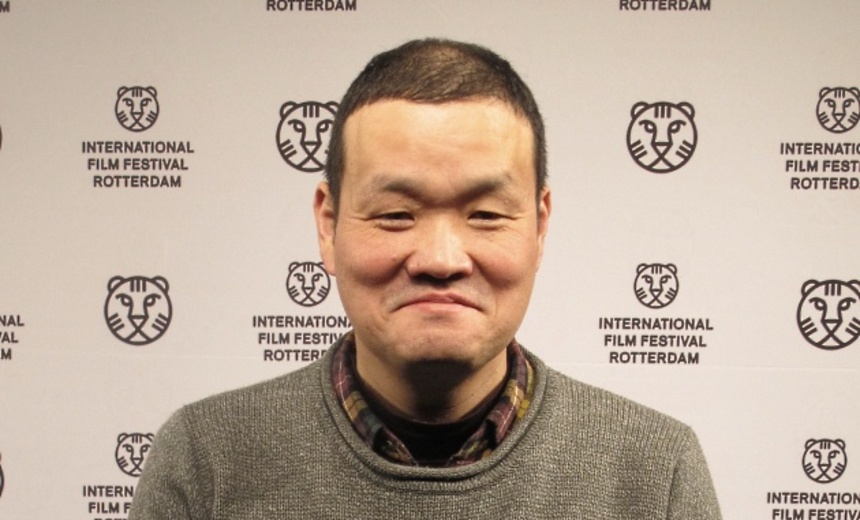 A few months back, the International Film Festival Rotterdam welcomed the Japanese director Nakata Hideo as a guest, famous for horror films like Ringu, Ringu 2 and Dark Water. Hideo had brought his newest J-horror film The Complex with him, a world-premiere no less, and we were happy to catch some time with him. And with The Complex about to receive its North American premiere as part of the New York Asian Film Festival we're happy to share that conversation now.

In the interview we managed to cover quite a lot of topics, but most of the time went into the very first question. And while the rest of the interview will be published soon, here is that one question and Nakata Hideo's highly amusing answer.


ScreenAnarchy: A few years ago, the IFFR had a whole program section dedicated to Asian horror. Several directors then told the press the following: one of the major reasons why Asian horror is so scary, is that for most of the people in Asia these films are not considered as fantasy fiction. They believe in ghosts, so for them it is the same as if you'd make a film about a bank robbery. Therefore my question to you would be: do YOU yourself believe in ghosts?

Nakata Hideo: Ehm... [thinks long] No, for my scientific side says no.

I used to study a science major at college, and there is no real... you know? If there was one plausible person who could say: "This is the other world, I went and came back." THEN I'd believe it. But now... we are living in a digital world and you sometimes see these pictures of ghosts and they always look fake-ish.

And just imagine if there is another world and ghosts are living there? It must be soooo crowded. [we all laugh]  So many billions of ghosts must be there. I cannot stand the idea that I'm going to be part of that, so I try not to think about it [chuckles]. Basically, unless it's proven that there is another world, full of ghosts and evil creatures that are real, my official answer would be no.

But... during the shoot of Ringu 2, fifteen years ago, we kept having supernatural phenomena happen to us. 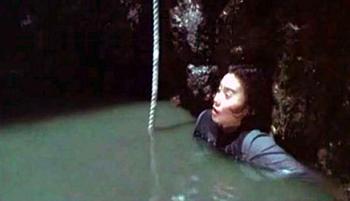 There was the time that we put the camera kind-of underneath the surface of the sea, inside a waterproof box, and the camera crewmember and Second Unit Director who were in the sea, they were shouting "Whoa, there is so much pressure here!". And we were at the shore, not deep in water at all. I was in the sea a bit further and thought, what are they talking about?

And then there was the time when we shot the sceen with the actress and the old man going inside a small cave. That's where in the film, Sadako the ghost is believed to be born, there, I mean put there. And, you know, we were just walking around, working, shooting... After the third take I said that's good, let's move on, and then the sound recording technician shouted "Somebody talked!". We did listen to the recordings and we clearly heard it, a young man's voice, calling and whispering. It even sounded like [whispers loudly] "Sadako!"

Rather than being scared, I was... well, you know. It's intriguing, it's interesting. And I tried to analyze what happened but I couldn't explain it.

Anyway, we moved on and kept shooting at the site of the cave. One time I was sitting there, waiting for the lighting, reading. Then, from the rock of the cave there was another voice. It was the sound of an old man's voice, like... tortured... [let's out a long groan], and coming from the rock! [we all laugh]

I was startled, but I still was trying to find a reason. A bit further, there was the older actor and he was looking in the script. So I watched his mouth, but when the sound appeared his mouth wasn't moving.  Both the cameraman and the AD heard the voice as well, and they thought I was the one.

They thought you were joking?

Yes, the AD, he said I was the one making the noises, but I definitely wasn't. And later, we found out that that specific location was famous for drowned bodies washing up. The place was thought to attract people who were crazed, who jumped from the rocks to commit suicide.

And those supernatural things... I mean, if I do not believe them at all, those phenomena should happen everywhere, like here? But I do not feel anything here. Those specific places, you know, like where terrible things happened or where these suicide bodies were found, why do those specific places have that kind of power?
And that makes me re-think that there is maybe such a world... [we all laugh].


After the world premiere yesterday you mentioned that weird things were happening during the shoot of The Complex as well, right? Something about a blown hard-drive... 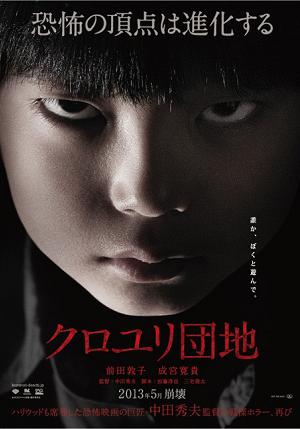 Yes! Yes, the day we shot the exorcism mantra it happened to the sound recordist. Now that we are living in a digital world, it is not done anymore to use authentic tape. These days the dub is kept in a huge, huge big hard-disc recorder. That hard-disc and its backup both got broken during the saying of the mantra, very unusual.

And that exorcism mantra is the real thing. It is authentic. It was hidden for many years, but we somehow found out about it. And it is a very... how do I say this? For a Japanese... it is a Shintoist prayer, but it uses very strong words. You know? Like "...throw up the blue blood, vomit red blood, black blood...". That is unusual, I have never heard such violent words in a Shintoist mantra.

Oh! And that actress, the one saying the mantra, she had real supernatural powers. During the costume fitting she warned me, she told me she had a power. During a previous shoot for television she was working with an older actor. One day she saw a small fairy. She saw several small people walking in a line, like the samurai, wearing black clothes, and she just thought that the old man might be dying. And the actor passed away a few days later.

That really scared me, and during the shoot she suddenly came to me and told me: "Beware of tonight!". [we all laugh, loudly]

Actually, I had hurt myself the day before. I had slipped on a ladder at the production office. I tripped and didn't have enough muscle strength to stop myself, so I went down like vroodoodoodoom, and hit the ground hard. My crewmembers just laughed, but I was like ouch...

So I said to her: "Yesterday I had something, some injuries already, maybe tonight I'll be fine?".

And thankfully everything went fine. So I'm here! [we all laugh]

Coming up soon in Part 2: The Complex, filmmaking in general, and the state of Japanese horror...