Live Action PATLABOR News: It's A Series And Also A Movie ! 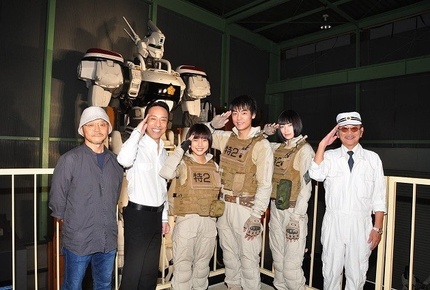 Remember that in March and July, there was news about a live-action Patlabor project, with original anime-creator Oshii Mamoru personally involved in some way?
Well, yesterday, in a live-streamed press conference, all was officially revealed. And the news is: it's going to be a television series in 2014, followed by a theatrical film in 2015. Oshii Mamoru will direct the film, and some of the episodes of the series.

Titled The Next Generation -Patlabor-, neither the series nor the movie is planned to be a reboot of the anime. Instead, the story takes place years after the adventures of the original teams. In 2013, a new Patlabor section has to patrol Tokyo, and while the series will have a slapstick comedy aspect to them, the 2015 film is planned to be dead serious. So actually, that does kind-of follow the same strategy as with the original 7-episode OVA anime of the eighties...

For THIS series, one pilot and twelve 45-minute episodes have been planned. Kawai Kenji will be doing the music for both the series and the film, the female cast all have Major-Kusanagi-slash-Ash-from-Avalon haircuts, and Oshii has a rumored whopping twenty million dollars budget to play around with -- part of which has been spent on two full-size (eight meters tall) animatronic Patlabor robot vehicles. Fingers crossed, let's all hope this will be as awesome as it sounds!

Thanks to Animenewsnetwork.com for alerting us, and the picture here is courtesy of Eiga.com.
Sign-In to Vote
Tweet Post Submit

Do you feel this content is inappropriate or infringes upon your rights? Click here to report it, or see our DMCA policy.
Oshii MamoruPatlaborThe Next GenerationErina ManoToshio KakeiSeiji FukushiRina OhtaActionSci-Fi

More about The Next Generation -Patlabor-