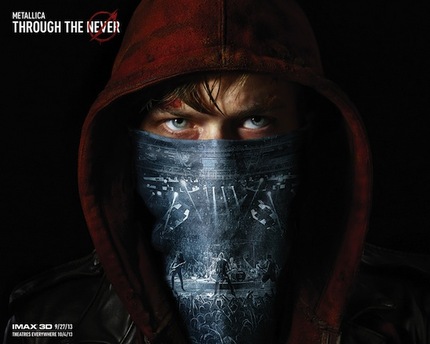 [Updated: The Code has been fixed and should work now to redeem passes.]

I know next to nothing about the band Metallica, so here I find myself just the messenger with the hunch that a good cross section of our audience at ScreenAnarchy also digs Metallica.

METALLICA THROUGH THE NEVER is more than a film. It is an experience. The sound quality, 3-D effects, action, apocalyptic narrative and cinematic structure will leave audiences stunned and then clamoring for more! It's not a documentary, it's not a concert film, it's a Metallica experience that their fans have never seen before and it's the motion picture event of the Fall.

If you live in New York City and would like to catch the film early on September 18, then all you gotta do is head over to Gofobo and enter the following code:

The first 100 folks who RSVP will get double passes -- Yes, it's that simple.

For the rest of the U.S., the film opens in IMAX on September 27 followed by a nationwide roll out October 4.

More about Metallica: Through the Never