Out Now On UK DVD: DEAD SUSHI Is Iguchi Insanity At Its Finest 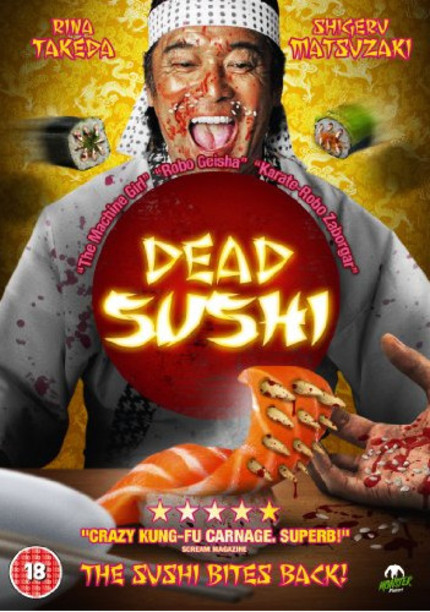 My friend and colleague Peter K once wrote a paper on the question of cultural difference, and how that translates when one watches a film from a different country. Can we really understand all the nuances of films that come from a cultural understanding, and perhaps most importantly, sense of humour, so different from our own? This always comes to mind when watching films from Japan, especially when they are like Noboru Iguchi's  Dead Sushi. I won't pretend to understand even half of what's going on; but it's about the journey, and this film is one hell of a fun journey. Monster Pictures have released a DVD in the UK, with some fine extras.

The premise is a little convoluted, but not too important, as it is merely an excuse for the insanity and effects. The daughter of a famous sushi chef runs away from home to work in a hotel, develops her culinary talents, and later must use that and her martial arts skills when someone injects the sushi with a substance that has them mutate into man-eating monsters.

Peter K wrote a review after seeing the film at Fantasia last year:

Noboru Iguchi's latest opus about revenge-seeking-man-eating sushi may not fall under the already infamous Sushi Typhoon label, but it bears many characteristics of the J-splatter studio's usual shtick: high-concept comedy that lampoons Japanese culture, manic scream acting from an ensemble cast, grotesque prosthetics and gallons and giga-bytes of blood. And while I have personally found that recipe a bit distasteful after a few of the genre's latest dishes, Iguchi's Dead Sushi serves up a particular brand of silliness that was hard to resist, especially when sitting among the sold-out enthusiastic throng that is the Fantasia audience as they chanted "SUSHI" again and again.

Apart from axe-wielding fish-head man (who needs his own movie), the gore and prosthetics are disappointingly not up to the quality of other J-splatter efforts, and there is the fairly typical-to-genre barrage of ill-conceived CGI gags, but they felt less distracting then usual. Maybe it helped that a character exclaimed "this is becoming increasingly ridiculous" a few minutes before a school of sushi assembled together to form a crapy looking CGI sushi-battleship. There's an extra degree of self-awareness that makes it all easier to swallow. That these less then stellar FX are complimented by, if not convincing (phantom punches abound), at least creative fight choreography, also make it more palatable. And that Rina carries each and every scene she's in like champ is also a cherry on top (I'm groaning at my food metaphors too).

Overall, I would tend to agree; I always love to see a heroine kicking some ass, even if it is mutant fish, and with films such as these, the self-reflexive nature of their outrageousness means you just throw yourself into it. (Seriously, flying sushi, mating sushi, flame thrower sushi, what's not to love?)

The picture and sound quality are fine, and the DVD includes both original Japanese language with English subtitles, or English dubbing (which is actually kind of fun, in that it reminds me of when I watched Japanese monster movies on television as a child). The extras include a very interesting Making of, with some interesting information on the inspiration for the film, and Takeda's incredible karate skill, and great footage of filming both the fight scenes, and how the sushi special effects were put into action, quite an intricate and delicate business. Interspersed with an interview with Iguchi as he eats some sushi, which is a little disturbing and funny after watching the film.  Also included is footage from the introduction to the world premiere at Fantasia, which portrays Iguchi's infectious energy, and shows off some of Takeda's fighting skills; and an interview, which shows the great relationship between director and actor. They explained how when people think of Japan, they think of sushi and karate, so this was part of the inspiration, to look at these kinds of stereotypes and how they fit in Japanese culture.

But by far the best extra was footage from the Extreme Sushi Challenge, a sushi eating contest that took place at the film's screening at Fantastic Fest. Not everything eaten was technically sushi, and some of it was definitely, well, let's just say out of the ordinary. I'm glad I didn't watch it on a full stomach, and I couldn't have participated, but I can imagine it was fun to be there, and it's an unusual extra that adds value to the DVD outside of the usual fare.

While not for everyone, if you are a fan of this kind of film, the UK DVD edition of Dead Sushi would be a welcome addition to your collection.