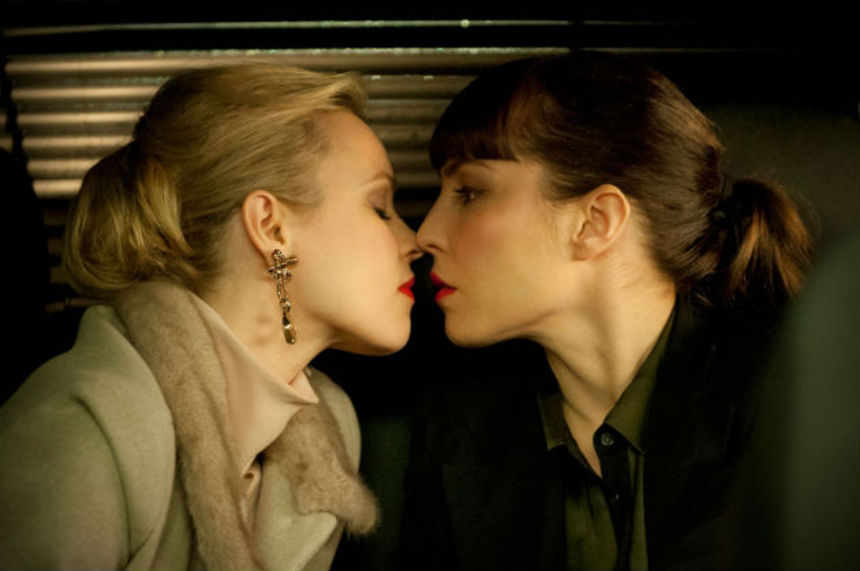 In fact, every scene of Passion seems to beg for a collective "return to form" proclamation. It's got identical twins, split-screen, sumptuous ballet, labyrinthine dream sequences and obsession to spare, but ultimately, it still feels like an over-the-hill rocker playing all his hits from forty years ago. On one hand, everything lacks the energy that originally made it so powerful, but, on the other hand, the songs are still better than anything else written in the last decade.

That is to say, Passion is great fun, and occasionally kinda brilliant, but it still doesn't hold a candle to Body Double, Dressed to Kill or even De Palma's late-period fever-dream masterpiece Femme Fatale. And most likely, those who have never been locked in long, bitter arguments defending De Palma's enormous contributions to cinema need not apply.

The ultra-stilted, aggressively flirtatious opening scene between Noomi Rapace and Rachel McAdams immediately establishes that we're in a world as far removed from nuanced realism as possible, which makes sense given the cutthroat-corporate-advertising milieu in which the film takes place. McAdams plays Christine, a high-powered, manipulative executive who's not only accustomed to using and walking over people to get what she wants, but actually seems to derive her lifeblood from it. Rapace plays her serious-minded, ambitious protegee Isabelle, who is talented enough to pose a threat to McAdams, but sensitive enough to be manipulated... at least at first. Soon after Christine steals credit for one of Isabelle's million-dollar ideas and threatens to turn in her accountant boyfriend (with whom Isabelle is having sex as well) for cooking the books, the power-grabbing, lust and ambition all give way to mental-breakdowns, and eventually murder.

The script, based on Alain Corneau's French film Love Crime, isn't De Palma's strongest, and especially those with an aversion to dream-logic will probably have a hard time staying on board during the last half-hour or so. That said, having seen the film twice, I can say it mostly holds up, though there are a few baffling loose ends. But De Palma has never made movies for people who want every dangling thread tied up and every plot twist totally plausible.

Also, while he employs every psycho-thriller cliché in the book, De Palma still seems to see the movie as more of a comedy than anything else. The performances often veer into kitsch, but Rapace and McAdams somehow make all of the veiled threats and passive-aggressive sparring hypnotic, rather than grating. In fact, the stylized acting melds perfectly into De Palma's fictional, over-the-top corporate world, in which every shot emphasizes a sense of luxury that is simultaneously exquisite, ridiculous and dull.

Pino Donaggio's (Raising Cain, Carrie) cheeky score, a scene-chewing blend of Bernard Hermann and music from a 90s made-for-tv-thriller, only further emphasizes this odd, often very funny dynamic. The lighting too sometimes veers into soap-opera territory, which, while it compliments the overall style, will likely disappoint those hoping for the sumptuous, decadent aesthetic of old-school De Palma. 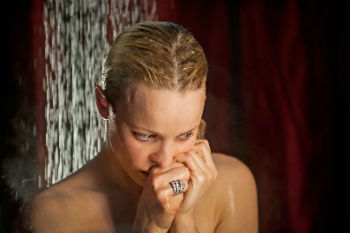 But as usual, the film's pulpy kitsch conceals some extremely compelling subtext. The way that corporate ambition colors all of the characters' seemingly fluid sexuality, and even their sense of time and reality, is far more layered and intriguing than the film's surface-level style suggests, and, those who have accused De Palma of being nothing more than a talentless Hitchcock imitator may find some wry humor in the scenes where Christine explains to Isabelle that stealing ideas is par for the course in the advertising world. Moreover, the depth with which De Palma explores Christine's ruthless, near socio-pathic psyche is impressive. As the film progresses, he begins to hint at a fascinating, almost sympathetic desperation deep down, governing all of her decisions.

And yet, for all of its merits, the film still lacks the vitality and audacity found in De Palma's best work. All of the obsessions and fetishes that characterized his work in the 70's and 80's are here, but often, they feel like the product of indifferent duty rather than his own fascination. Indeed, De Palma has graduated from having dialogues with Hitchcock and is now having dialogues with his own previous work. Except, unlike the dazzling visual-storytelling of Femme Fatale, there isn't much of a dialogue here, just images and stylistic flourishes that often feel more like lazy winks and nudges.

However, there are still a few genuinely inspired moments that recall the devilish ingenuity of De Palma-past. In one scene, Isabelle slams her car into a vending machine in a parking garage and sets off the sprinkler above, resulting in a melodramatic crane shot (complete with swelling score) of her crying uncontrollably against the car like a rain-soaked, heart-broken character from a 50's melodrama. Only, her anguish is the result of a sex tape, and she's actually only stuck in a small swatch of "rain" inside a parking garage. It's a sly, hilarious image, right up there with De Palma's use of rear-projection for the beach kiss in Body Double. If De Palma had focused more on subverting and innovating what he had already done rather than just referencing it, Passion may have been the "return to form" he seems to want it to be.

That said, De Palma on a mediocre day is still more interesting than most filmmakers at their best, and, despite all the ways it fell short, I still saw Passion twice in one week and enjoyed it immensely each time. If nothing else, it's certainly entertaining enough to suggest that fans shouldn't write off the modern master of stylish suspense just yet.

Review originally published in connection with the film's theatrical release in France in February 2013. Passion opens in select theaters in the U.S. on Friday, August 30, via EOne. It's also available to watch via various Video On Demand platforms. The film will open in Canada on Friday, September 13.

Do you feel this content is inappropriate or infringes upon your rights? Click here to report it, or see our DMCA policy.
Brian De PalmaNoomi RapaceRachel MacAdams