Review: BLOOD, A Little Thinner Than It Should Be 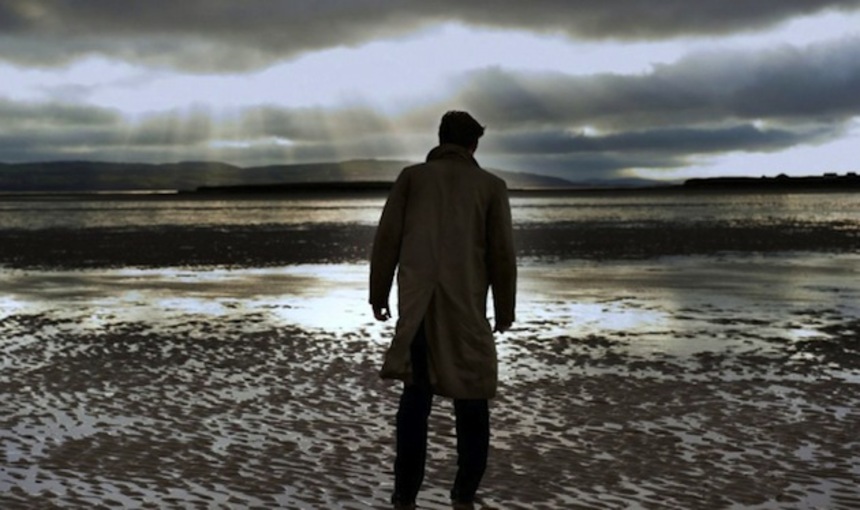 With a title as simple and to the point as Blood, you'd think that director Nick Murphy was going for a back-to-basics chiller-thriller, and you'd be half right.
Blood begins as the sort of dark-rimmed, sleepy town procedural showcased by the trailer, but as the film, and the plot's twists and turns, ramp up to the explosive finale, the filmmaking begins to resemble a dyed-in-the-wool cop drama less and less. In the end, Blood complicates a promisingly streamlined premise without doing the necessary legwork to justify such density.

The story is rich with everything you'd want from a dark, English cop drama: brothers Joe and Chrissie Fairburn (Paul Bettany and Stephen Graham, respectively) are teamed up to investigate the horrific murder of a young girl, an occasion that's presented as tragic but not altogether uncommon on the unnamed island where the film is set. As the case moves forward, a likely suspect emerges: an off-center parolee (Ben Crompton) who knew the victim well, and spent a lot of time with her. The circumstantial evidence piles up, but eventually the Fairburn brothers are forced to cut their man loose.

Eventually, spurred on by frustrating home lives and copious amounts of drink, the two detectives kidnap their suspect in the middle of the night and drive out to the beach at the edge of the island, hoping to coax a confession. Instead, Joe snaps and kills him. Days later, the detectives uncover the identity of the true killers, and that's when their consciences, as well as the efforts of colleague Robert Seymour (Mark Strong) begin to complicate things...

The setup here is an interesting play on the old "sins of our fathers" trope that doesn't quite gel in the end. The Fairburns' father, former chief and current dementia case Lenny (Brian Cox), is meant to serve as the fountain from which dubious from-the-gut police work and stubborn "might makes right" philosophizing is supposed to have trickled down, but we're never quite given enough of a window into Lenny's reign or the brothers' tutelage under him for this connection to produce a significant spark.

More convincing is Joe's obsession over an old blown case that resulted in a needless second homicide, one that spurs his dogged and emotional pursuit of this latest murder suspect, but Joe's old-fashioned bulldog-devotion to his family feels tacked on, as does Chrissie's romantic subplot with sweetheart turned semi-reluctant fiancée. As the film moves into the third act, things take on an ill-advised level of surrealism, and that tidy little cop story that seemed so promising one hour prior begins to go off the rails.

In terms of performances, the cast of Blood is a mixed bag. Bettany is at front and center, but he's curiously stiff throughout most of the film, save for the moments when he's required to go into full breakdown mode, and then he delivers the thespian stylings in spades. By contrast, Graham makes Chrissie into a believable cop who wants to do the right thing, but he falls flat in the most demanding moments.

The always wonderful Brian Cox is given little to do with his somewhat cheesy role of the forgetful ex-tyrant Lenny, but his natural charisma and screen presence is enough to overrule the character's written shortcomings. Mark Strong is more than adequate in his wet blanket skeptic role, but his character is semi-redundant. The supporting cast, filled out mostly by nameless extras and the Fairburns' brothers love interests, should be commended for lending any life at all to their barely developed roles.

Where Blood shines is visually, though the strength of the photography lies in cinematographer George Richmond's willingness to embrace the dark. Blood is set on a cold and windy seablown island, and Richmond isn't afraid to shroud his scenes in muted greys and blues, lending an appropriate visual mood to the melancholy proceedings. His work is exceptionally good in the film's many night sequences, shot with spare lighting and plenty of obscuring shadows. It seems like a matter of little consequence, but too many DPs seem afraid to cover up the pretty faces of leading men and ladies these days, and a moody, atmospheric thriller like Blood absolutely calls for it.

In summation, Blood is certainly an entertaining ride and a nice option for those seeking a respite from the summer's usual onslaught of high-concept nonsense, but many movie-goers might wish that the filmmakers had filled in the gaps a little more. There's a tight, claustrophobic, and moving film somewhere underneath all the thinly layered and half-baked thematics, but it may be lost to the sands of time.

Blood releases theatrically in the U.S. August 9, and is currently available on Region 2 DVD in the UK.