Even from indoors I can sense the sprawl. It is an onslaught. It is an adventure. Its sun-charged heart of concrete beats ceaselessly. The seeming endlessness of a loud city song, a vortex cradled by hills, valleys, and mountains. Even when one arrives at the ocean, the sprawl merely careens into other directions. I live in Los Angeles. I am a film journalist in Los Angeles. It is a town that perplexes and excites me. I am writing today's column in a state of flux, with doubt sidling for a spot in the sun. I won't let it. I've been back for six months. I have an incredible group of friends and many, many smiling acquaintances here. As a journalist I've attended the L.A. Film Festival, been to parties and special screenings, delighted in expanding my tribe. But I don't feel grounded. Granted, it's only been six months, a short time to be anywhere. And yet...

When I attended L.A. Film Fest back in June I was startled to discover that it all took place in South downtown, near the Staples Center, at a complex of high-end franchise restaurants and entertainment destinations called L.A. Live. The fest was being held at a multiplex. Convenient in many respects, the location was somehow lacking a personality that allowed well, the film festival to truly feel like a film festival; to feel like you were gathering a community of like-minded folks. The lounge was on top of a parking garage (somehow decidedly very L.A.); we shared the lobby with audiences for Monster's University and World War Z. Granted, it was festive, but merely in spurts, pockets... Something still felt off. It lacked character, nuance, texture, a uniqueness that said "yes this is the L.A. Film Festival. This is special." This is not an attack on the L.A. Film Fest. This was merely my experience, and a symptom of something larger and seemingly less definable. And that's just it. Outside of a few institutions like The Cinefamily, or L.A. Film Fest's parent Film Independent, cinephilia and independent visions seem detached here, or somehow secret and nearly unattainable. But that doesn't make sense. This is Los Angeles. Everything is here.

And that's the rub, Los Angeles is so vast, with no real epicenter, that one is left to choose how to structure and build their own city. It's an amazing and baffling gift. But if it's like this for a film journalist, well, I began to wonder... how is it for the people actually trying to make independent films -- films largely outside of the Hollywood industry -- here?

I reached out to two L.A. based filmmakers for their side of the story. Josh Mandel is a Slamdance programmer and producer of the SoCal noir This Last Lonely Place and the upcoming The White Orchid. J.R. Hughto is the writer/director of psychological thriller Diamond On Vinyl (read my review here). 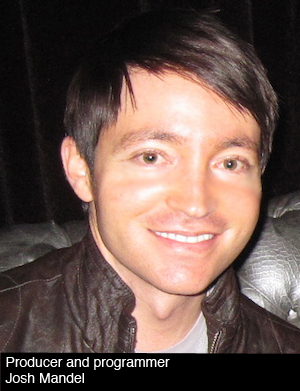 Both of their films were shot in Los Angeles. And there is a distinction in being merely L.A. based and making your film here, as there seems to be a story that you can live and network in L.A., but it's best to make your film elsewhere. As Mandel pointed out to me that's not exactly the case: " People associate L.A. with Hollywood; not as much independent film. The reality is that more independent filmmakers are in L.A. than any other major US city. And, apart from the L.A.-originated 'indies' shooting outside of California purely for tax incentives rather than creative incentives, a significant portion of low budget films are still made here. But, when you look at many of the best films that play at marquee festivals like Sundance, Slamdance, SXSW, Tribeca, etc many come from outside of L.A. There are great filmmaking communities in New York, Austin, the Pacific Northwest (Seattle), and throughout the South. It's certainly easier to stand out when you're a filmmaker working outside of L.A. But, that's not to say that great filmmakers or films don't come from here."

So what then about living here? How can independently minded filmmakers cultivate a livelihood and gain experience? Hughto shared this kernel: "I moved to Los Angeles for grad school, and I never expected to stay. The thing that kept me was work in the industry - it can be somewhat easy for filmmakers like me who have specialized skills that fit into the industry model to get work and stay involved in industry filmmaking.  And staying in touch with the industry day to day does have its advantages, between contacts and learning experience that I can use in my own practice. Access is perhaps L.A.'s biggest advantage. Whether it's actors, crew, equipment, or just general infrastructure, the city is set up to make films. That's also one of its biggest disadvantages - every bodega has a shooting contract ready for you. It can make locations more expensive and neighbors weary of shoots."

Mandel added, "L.A. is adorned with young filmmakers that are hungry to work and learn and advance. You need PAs last minute for a shoot happening tomorrow? Done. Oh, and you can't pay them money, just credit and food? No problem. You'd prefer those PAs know the difference between a net and flag? Rest assured. You can find great people to work on your film in cities all over the country: who are talented, smart, driven and hungry for the work. But, you won't find as many as you will here in L.A."

The question then is: Well, who are these people? Hughto had a rather endearing answer for me. "Half the people at my day job either have made, want to make, or are making their own films. It's also one thing that keeps the scene from either stagnating or becoming known for one particular group or type of film. There are communities here that I'm sure I'm not aware of, even though I've been here now for 10 years. I might not know, for example, that L.A. has a really expansive experimental film scene if I wasn't part of the CalArts film community."

My mind boggles time and time again by how many people I meet at parties, screenings, and other gatherings. Cards and numbers pass through my hands and phone like magic tricks, never to be understood or seen again. Networking is a mystery only solved through the process of continually doing it. I suppose that's life in any field, amongst any passion. "Independent film in L.A. is so large that I don't have any confidence that I know even half of the screenings going on at any given time," Hughto continued. "Let alone the communities of filmmakers that make those screenings happen. That said, with each film I work on L.A. does become ever so slightly more interconnected.  Casting Brian McGuire in Diamond on Vinyl was one moment like that - oh, here's another community of filmmakers that are working in parallel that I should have known about all along. And then that loop closes further when it turns out that we've worked with people in common. But that seems to be a very slow process because L.A. is so filled with independent filmmakers." 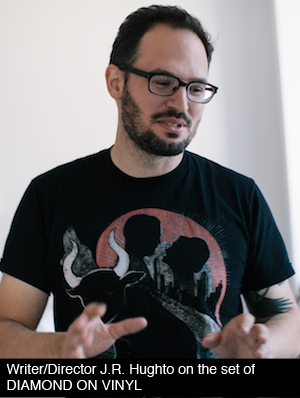 One always needs community. The irony of using the word independent in filmmaking is not lost here. The fact that something sustainable is needed to make independent film vibrant and buoyant is perhaps the easiest conclusion one could make about the whole undertaking. But in a town like L.A., it's a good reminder to make.

And yet what of the idea of success, and how to gauge it? "The idea of success," Hughto remarked, "and whose version we're talking about, does creep in to create a consistent tension while living in Los Angeles. The city is very aware of the Industry's version of success - its all around us regardless of whether or not we work within the system - and so your own filmmaking is generally regarded within that context. 'Did you get Theatrical? Did you get an Agent? What's next?' Those questions can come at you even from non-filmmaking friends, and when your practice is not particularly commercially minded (ahem) being able to compartmentalize and focus on your own goals can be critical."

Mandel added: "From a logistical standpoint, it can be harder to film a low budget feature in LA if trying to work outside the restrictions of the very powerful Unions based here. But, that's quite a glass half-empty way of seeing things. Some of the best films I see every year programming festivals are still made in LA. If you're a filmmaker with an original voice, who isn't afraid to struggle, and can turn living in this city into a benefit rather than a burden, you can succeed. Glass half-full."

While my story isn't Mandel's story, or Hughto's story, one thing is clear: we're all in this sprawl together. We've chosen to live in Los Angeles, we've decided to be a part of the beat and the pulse of this multifaceted place, to find something beyond semblance, to aim our creative trajectories at the peripheral. We see, hear and collect stories. We create and share our own. They are adventures. And like most adventures, either by those whom we have met, or by those whom we have yet to know, they are continuing.

Header photos by the author (From left to right: Film Set in Echo Park, Levitating Mass at LACMA, Mannequins on Melrose)

Do you feel this content is inappropriate or infringes upon your rights? Click here to report it, or see our DMCA policy.
diamond on vinylindependent filmmakingindie filmmakingjosh mandeljr hughtoLALos Angelesthis last lonely place