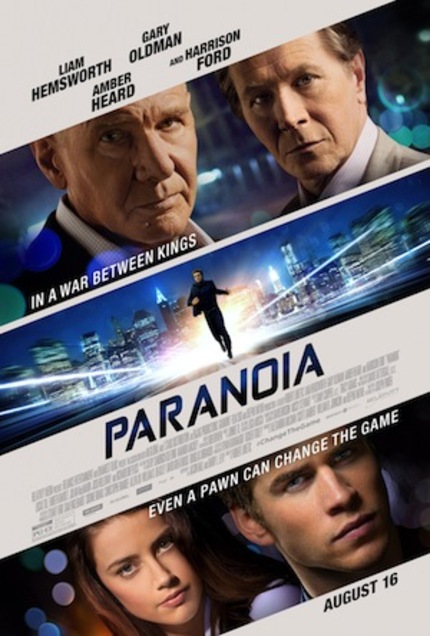 It's been a good two decades since we saw this much Harrison Ford on the big screen, so whatever the quality of the overall film at hand, it is somewhat nice to see whom many of us would cite as a childhood hero still going. This August sees Ford co-star alongside Gary Oldman, Liam Hemsworth, Amber Heard and Richard Dryfeuss in the corporate thriller Paranoia.

If you'd like the chance to snag a pair of passes to an advanced screening of the film in NYC on August 14th, then you're just one click away. By the godforsaken hand of some mighty numerical computing, 100 folks will be selected Monday, August 13th. Okay -- click here and you will be whisked to Gofobo. So go.

The high stakes thriller Paranoia takes us deep behind the scenes of global success to a deadly world of greed and deception.  The two most powerful tech billionaires in the world are bitter rivals with a complicated past who will stop at nothing to destroy each other.  A young superstar, seduced by unlimited wealth and power falls between them, and becomes trapped in the middle of the twists and turns of their life-and-death game of corporate espionage.  By the time he realizes his life is in danger, he is in far too deep and knows far too much for them to let him walk away.

Paranoia releases in the U.S. on August 16th.

Do you feel this content is inappropriate or infringes upon your rights? Click here to report it, or see our DMCA policy.
amber heardgary oldmangiveawayharrison fordparanoia