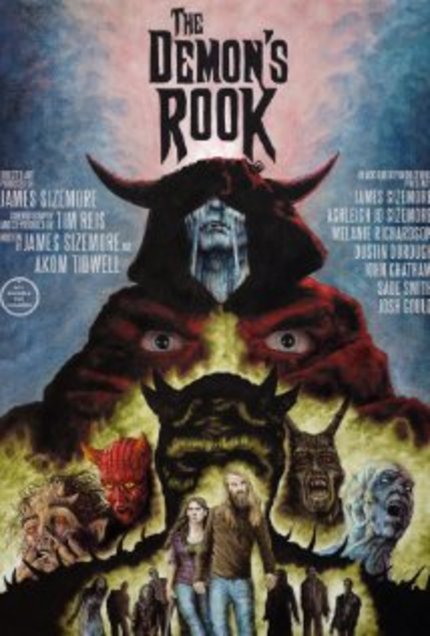 On my way into last night's screening of The Demon's Rook, a friend who had seen it asked me if I was a marijuana smoker. When I said no, he told me it might help with watching the film. Within a few minutes I could see what he meant. The film is a throwback to 80s B-movie horror films where the effects were hand-made and the story, well, didn't always connect. But this is not a bad thing; far from it.  The Demon's Rook is all about having fun with homemade movies, the kind you made in your backyard on the weekend with friends, where you sort of remembered what you filmed the previous weekend and tried to keep up with the narrative, but really, you were just seeing what you could do with dry ice and fake blood.

Roscoe is a little boy living somewhere in rural America. During the day, he plays hide-and-seek with his best friend Eva. At night, he's visited by a strange demon, Dimwos. One night, Dimwos take Roscoe to his secret cave, where he spends the next twenty years learning magic and how to save the world from other, more evil demons. When Roscoe emerges as an adult, he must find Eva and fight off the evil that is turning people into demons and zombies.

My understanding is that this film is very much a family affair, filmed on writer/director/star James Sizemore's family farm. And the production value is very high. In fact, it made me nostalgic for the days of handmade special effects, of using whatever was on hand to make someone look like a zombie. And you know what? The effects in this film are better, because they are handmade. They look more real than anything CGI. The monsters are better and more interesting, with such attention to detail. A combination of old-school Fulci-style Italian horror films and creature features, the film really is about the combination of effects, sound and music. I kept marvelling at it, and how filmmakers have forgotten to put this kind of effort in.

As with all films like this, the narrative is somewhat secondary. It's definitely got the surrealism down, and the story isn't hard to follow. As I said, it feels like were filming in script order, and maybe they didn't have an exact script, so couldn't quite remember what they filmed the day before. Overall, this isn't a problem, though at slightly more than 100 minutes, it could do with some trimming, as a few times it does fall a bit flat as we're waiting for the next creature to show up.

Considering the psychedelic nature of the story, though, its sparseness and lack of continuity help add to the atmosphere. The old school style effects also help to connect with the characters more, both to cry for them and laugh at them. The screening I attended was laughing almost the whole way through, the kind of laughter that comes from a strange combination of both understanding and WTF was that?.

All the performers, Sizemore, Ashleigh Jo Sizemore as Eva, and all the supporting cast put their heart and souls into it; they match their acting to the style and level of the film without making light or fun of it. This is a rare and great case of a labour of love that is incredible accomplished, without falling into the usual traps of DIY filmmaking. There is great time and care in this film, and above all, great fun. So sit back, relax (spliff optional) and enjoy what is sure to become a classic.

Do you feel this content is inappropriate or infringes upon your rights? Click here to report it, or see our DMCA policy.
The Demon's RookJames SizemoreAkom TidwellAshleigh Jo SizemoreJohn ChathamMelanie RichardsonAdventureFantasyHorror

More about The Demon's Rook