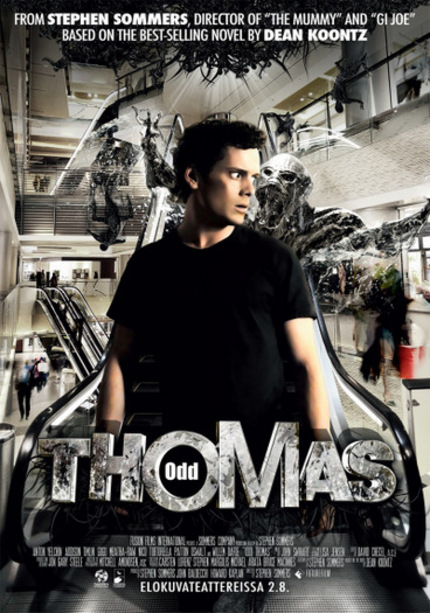 Odd Thomas is a film that thinks it's aimed at geeks, a target market who would enjoy a film that wants to be The Frighteners via way of Edgar Wright. Heck, I would enjoy that film. Sadly, Odd Thomas is not that film. Instead, it is a constant barrage of bad colour, sound and editing so fast that if the story weren't so predictable, you could miss something. Well, I probably did, but that was because the story kept changing direction, I'm guessing in an attempt to seem clever. But it just came off as a sad Hollywood attempt to tap into a particular geek demographic, but not actually thinking about what that demographic watches, and instead trying to force them to like what Hollywood makes.

Based on a novel by Dean Koontz, titular character Odd Thomas (Anton Yelchin) lives in southwest America, and can see dead people. But as he points out, he likes to do something about it, especially if those people have been murdered. He has a deal with police detective Chief Porter (Willem Dafoe), who covers up Odd's private investigations while nabbing the bad guy, helped in his work by his girlfriend, Stormy. One day, Odd sees several creatures called bodachs (invisible to everyone else), who only appear when there's going to be massive death. Odd sets out to figure out where this might happen and try to prevent it.

The story is simple enough, and is explained easily in the first 15 minutes. And I actually enjoyed this beginning. Sure, it's obviously aimed at teenagers, but I was aware of this target and settled in accordingly. Yelchin is very charming, it was nice to see Dafoe doing some light comedy,  some of director Stephen Sommers' previous work (such as The Mummy) is great, and I like stories with ghosts and demons. But after I had settled in, I began to notice something. No shot seemed to last longer than a few seconds, new plot points or characters were constantly being added, giving no time for development or for the audience to try and figure out the story and mystery. And constant, constant sound and score; I don't think the movie was quiet for a second. I'm not sure if this is because the filmmakers think the audience is dumb or if they figure the audience the audience will get bored and leave, and so have to keep it moving fast.

Moments of 'revelation', or ones with significant clues to help the audience solve the mystery are introduced with so much fanfare and metaphorical pointing through camera shots that linger (some of the few) that the film almost wants to be (or seem) predictable; though perhaps the intention was the make the audience feel as though they were also 'Odd'. First there is one bad guy, then more are added late in the film, but hey, you already figured that out, didn't you? Clever you. This might be how the mystery unfolds in the book as well, with constant additions and changes in direction. But it doesn't make for a smooth film narrative, and the constant jump cuts, flashbacks, and harsh pastel colour palette make it increasingly unpalatable.

Apparently, the film is trapped in a legal dispute, so is not likely to be screened in North America anytime soon. If it ever is, it will likely do well, though not necessarily with those it wants to. And the film does have some good laughs and great special effects. But overall, it fails both an interesting story, instead taking its audience on a thrill ride designed to hide plot holes, inconsistencies, and poor execution.