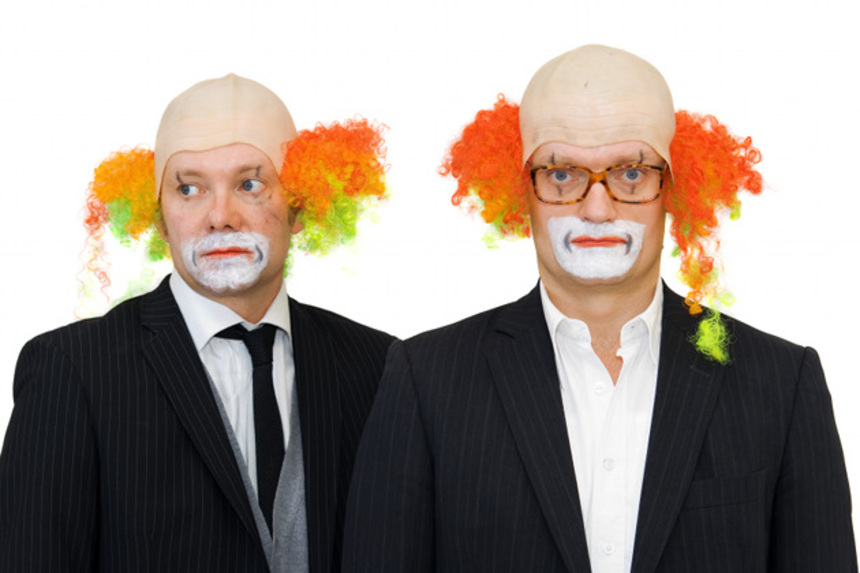 If you, like me, laughed your ass off at outrageous Danish comedy feature Klown, then let me be the bearer of glad tidings: You've only just scratched the surface. For, you see, that feature film followed six seasons of a hugely successful television series that is every bit as bold and that series has just become available in the US via Hulu. Check the full release and trailer below and prepare to say goodbye to all of your available viewing hours over the next couple weeks ...

AUSTIN, TX - July 16, 2013 - Drafthouse Films, the film distribution arm of the Alamo Drafthouse Cinema, announced today the acquisition of North American rights to the international hit Danish comedy series "Klown." Originally airing from 2005-2009, "Klown" was the basis of last year's multi-award-winning comedy feature of the same name, which The Village Voice hailed as "the funniest movie of the year." Audiences will now have a chance to see the complete 60-episode series exclusively on Hulu and Hulu Plus beginning today and via digital download packages direct from official website www.klown.tv starting on July 23.

"Klown" follows two wildly inappropriate friends - played by celebrated comedians
Frank Hvam and Casper Christensen (screenwriters for Sacha Baron Cohen's upcoming feature The Lesbian) as they plow through endless jaw-dropping misadventures and boundary-busting debaucheries. "When we started the series," Frank Hvam told the New York Times in 2012, "we made a list of 20 taboos, from racial issues to cannibalism to pedophilia to cancer; all kinds of terrible things." They then addressed each, episode by episode. When the feature film version of "Klown" debuted in Denmark, it was that year's top-grossing film at the box office next to Avatar. Warner Brothers has recently tapped Klown for an English language remake with Todd Phillips (The Hangover series), producing, written by and starring Danny McBride (This Is The End, HBO's "Eastbound And Down").

"No subject is too taboo for this incredibly hilarious and utterly fearless series," says Drafthouse Films' Creative Director Evan Husney, "and ever since we released the feature Klown last summer, the demand for the original TV series has been high. We couldn't be more excited to drop more of Frank and Casper's bar-raising hilarity on unsuspecting American audiences."

KLOWN: The Series [Trailer] Now Available on Hulu/Hulu Plus from Drafthouse Films on Vimeo.

Busan 2020 Review: VESTIGE Ponders the Ineffable with Grace and Mystery