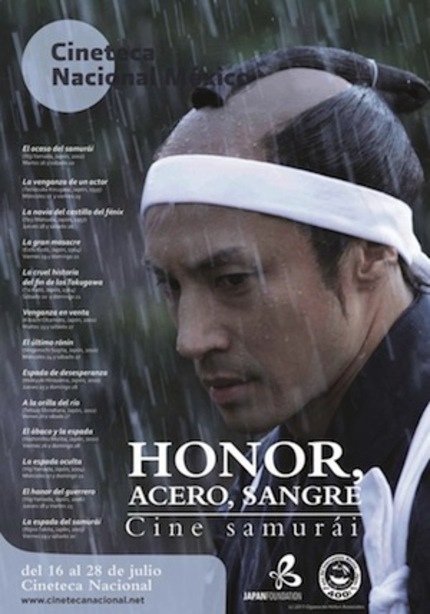 Another interesting film season is about to begin at Mexico's Cinematheque (Cineteca Nacional). Asian cinema has had a great presence there this year, with a past season dedicated to Korean movies, and now one to samurai cinema. Under the title of "Honor, acero y sangre: cine samurái" ("Honor, steel and blood: samurai cinema"), the Cinematheque will be showing 13 samurai films from July 16 to 28.

"In the commemoration of the 400 years of the Hasekura mission, [led] by the samurai Hasekura Tsunenaga with the purpose of trading with the then New Spain, Mexico's Cinematheque, with the support of the Japan Foundation in Mexico, celebrates this occurrence that marked the beginning of the relations between both countries with a selection of films that reflect the historic transformation of the samurais with productions from the 1930s to our days."

The film that opens the season is Yamada Yoji's The Twilight Samurai, first part of Yamada's samurai trilogy. Actually, part two and three are also in the selection: The Hidden Blade and Love and Honor. Yamada visited Mexico's Cinematheque for a retrospective of his work in 2002, but the rest of the material is basically new for Mexican audiences. Another good thing is that the selection will travel from Mexico City to two other cities of the country: Monterrey, Nuevo León (from July 30 to August 5) and Cuernavaca, Morelos (from August 8 to 14).

This is the complete lineup of "Honor, steel and blood: samurai cinema":