Review: THE TO DO LIST Gets It Done, But Not Satisfyingly 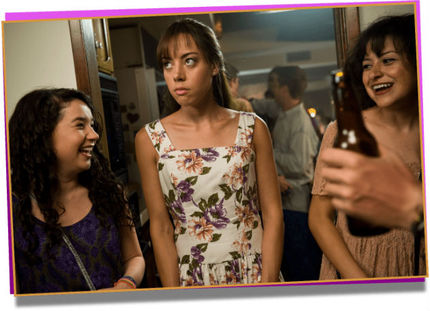 In The To Do List, Aubrey Plaza plays a virginal high school valedictorian who decides, apropos of nothing, that she needs to spend the summer having every possible sexual experience as practice for college. (High school college-prep courses only teach you so much.) Since she's a methodical, organized girl, she makes a list of all the things she needs to do, with assistance from her more worldly friends. Since she's a hopelessly naive and sheltered girl, she doesn't even know what some of the things are, let alone how to do them.

The problem with the film isn't its scenario, which is just a female-centric twist on the standard sex comedy formula, with the requisite humiliations, outrageous misunderstandings, and accidental eating of gross things. Writer-director Maggie Carey, a comedy writer making her first feature, peppers the film with amusingly coarse dialogue and some genuinely funny situations. She wisely plays on nostalgia, too: like many teen comedies, the film is set in the past -- in this case 1993, before the Internet came along to answer young people's sex questions. As a member of the graduating class of 1992 (go Tigers!), I can attest to the validity of the characters' hairstyles and musical preferences.

The main problem, it grieves me to report, is casting 28-year-old Aubrey Plaza in the lead. It's not just that she seems too old to pass for a high school senior (although that's part of it), it's that the role is all wrong for her particular skills. She's fantastic on Parks and Recreation as the deeply sardonic and ironically detached April Ludgate, and she's cultivated variations of that persona elsewhere, including last year's charming Safety Not Guaranteed. Here, as Brandy Klark, she's supposed to be sincere, innocent, unpopular, geeky, and even clueless -- and I never bought it for a minute. The role is wrong for her, and she doesn't commit deeply enough to make it work. You rarely get the sense that she's being anyone other than Aubrey Plaza. It's fine for actors, especially comedic ones, to only play versions of themselves, but it means you have to choose roles that mesh with the sort of shtick you do. This ain't it.

And it's a shame, because there's a lot to enjoy and laugh at here. Brandy's ultimate goal is to have intercourse with Rusty Waters (Scott Porter), the shaggy-haired lifeguard dreamboat who works at the public pool where she has a summer job. In the meantime, she'll practice the lead-up steps with whoever's available, including Cameron (Johnny Simmons), her platonic friend who's secretly in love with her. Egged on by her friends (Alia Shawkat and Sarah Steele) and her slutty sister (Rachel Bilson), Brandy is doggedly determined to try everything on the list, no matter how awkward or embarrassing the experience may be. Her goody-two-shoes, non-swearing parents (Connie Britton and Clark Gregg) are a funny counterpoint as they hash out their own sexual hangups. Christopher Mintz-Plasse, Andy Samberg, Donald Glover, and Bill Hader (the filmmaker's husband) pop up in supporting roles and earn a few laughs apiece.

To be clear, The To Do List isn't bad. It's disappointing only because it could have been -- ought to have been -- so much better. A more polished screenplay and a more suitable lead actress would have done wonders for it. Although maybe it's fitting that a movie about having sex for the first time should turn out to be a fumbling, mishandled experience that's moderately enjoyable but not nearly as good as you've heard.

The films opens wide in theaters across the U.S. on Friday, July 26.

Do you feel this content is inappropriate or infringes upon your rights? Click here to report it, or see our DMCA policy.
Aubrey PlazaMaggie CareyJohnny SimmonsBill HaderAlia ShawkatComedyRomance