Review: THE SMURFS 2, The Last Temptation of Smurfette 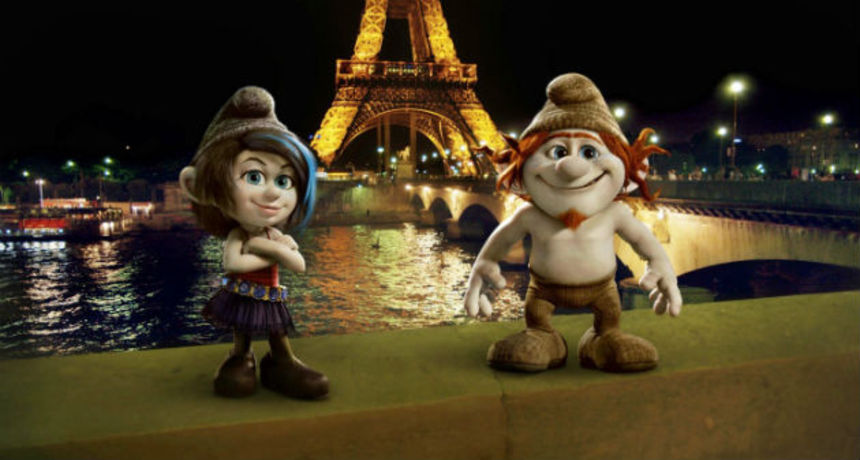 The Smurfs 2 has all the standard obnoxious pop culture references and vaguely disguised maybe-dirty jokes we've come to expect from any self-respecting contemporary kids movie.
This one is helped along by the word "smurf," which not just describes the race of small blue people that were once the esteemed creations of the Belgian comic artist Peyo, before being appropriated by Hanna-Barbera to become a 1980s Saturday morning television cartoon staple. (Now, in their live action movies, they like to crash the "real world" to visit Neil Patrick Harris.) No, the word "smurf" is famously used by the smurfs to describe anything, but in The Smurfs 2, it more often becomes a surrogate swear word.
This is one way it portends to "edginess," via faux cleverness. (It also does so by having characters call out the "Smurfs" theme anthem as annoying.) So, are parents who get dragged to this movie smurfed from the get-go? Actually, no.

(And here's where I risk any all my film critic credibility...) Having caught up with the first Smurfs movie only a month ago, I was pleasantly shocked to find that this global mega-hit, this epitome of hyper commercialized pandering adaptation, was actually somewhat enjoyable. Granted, I took my three young kids to see it at a free screening, and they dug it immensely. But they're kids - of course they're going to go for it: The Smurfs is not scary, nor difficult in plot, and it has plenty of color and sight gags. While those simple elements aren't enough to win me over, there is something to be said for enjoying something through the eyes of one's kids.

So, with that caveat, I'll confess to not hating either Smurfs movie. (If you're okay with one, you'll probably be okay with the other, as they're about the same in tone and feel.) Beneath all the smurfy shenanigans that are anathema to most any self respecting film snob, these films are actually about something (that is, besides crass cross-promotion for the products of parent company Sony). Where the first film, aside from being a fast paced adventure about a handful of displaced Smurfs trapped in New York City, was rooted in a theme of pending parenthood, The Smurfs 2 is more overtly about overcoming familial displacement anxiety. 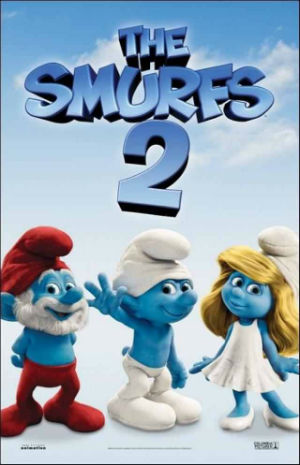 The Smurfs themselves are displaced this time in Paris, on a rescue mission to bring back Smurfette from the clutches of her evil creator, Gargamel, while our heroine faces inner turmoil about not belonging within her adopted community, the good and pure Smurf village. The film makes it abundantly clear that the other smurfs truly do care about Smurfette, and didn't really forget her birthday, which she spends the movie fretting over. Still, her existential crisis is clear enough, even if it doesn't plumb the raw depths of, say, Buzz Lightyear.

Katy Perry as the voice of Smurfette lacks the dramatic chops to carry her story much beyond her increased role in this film. (In 2011's The Smurfs, she was basically along for the ride). Also returning is Jonathan Winters as Papa Smurf, cashing one last paycheck before his much-mourned death last year. (A kindly-worded memoriam in the closing credits made me a little misty.)

The actors playing the human characters in this animation/live action hybrid, which is how they're promoting Smurfs 2, commit far more fully, lending the film enough gravitas to elevate it from the Chipmunks movie blahs. Neil Patrick Harris - his character so concerned with pleasing his boss the first time around - is now apparently able to completely ignore his once all-important job, drop everything, and jet off to Paris with the smurfs. Harris, like Smurfette, has a dramatic arc about coming to terms with his upbringing. His character's stepfather, played by Brendan Gleeson, as well as his wife, played by the returning Jayma Mays, and their young son Blue, get caught up in all this as well.

As the evil Gargamel, it's Hank Azaria who totally immerses himself, to pleasing effect. At this point in his career, Azaria doesn't need the role, but he's clearly having a blast playing an old bucktoothed buzzard, a portrayal that's as much ham as it is cheese - and the filmmaker takes full advantage of that. Without crossing the line into "too scary for kids" territory, Azaria's Gargamel attempts to lure Smurfette into joining him on the dark side. It's enough to give her the existential blues for a time, but naturally not enough to break her spirit.
The whole struggle has all the will-she-or-won't-she tension of a moralizing children's book you've read 100 times, but it still made my five year old daughter anxious for about thirty seconds. Gargamel's also cooked up a few new not-quite smurfs (called "naughties") with the hopes of using them in his half-baked global domination plan. (One guess where these likable characters end up.) Of course, my favorite element of these movies is his grotesquely mistreated CG cat, Azrael (voiced by Frank Welker, Mr. Animal Voices himself).

I realize that I've likely said more about The Smurfs 2 than most anyone expects or even cares to read. But I'm okay with that. I'm not giving the Smurfs films a critical pass on every level, but I am saying that through the appropriately adjusted filter of kid eyes - to whom these films somehow genuinely resonate with more so than most adults would ever care to imagine - it must be said that there's more in these colorful 3D hollowed-out mushrooms than just empty space.
Parents could do worse than The Smurfs 2, as could everyone involved with this smurfing movie. And that's no bullsmurf.
Tweet Post Submit

Do you feel this content is inappropriate or infringes upon your rights? Click here to report it, or see our DMCA policy.
Hank AzariaKaty PerryNeil Patrick HarrisSmurfs 2

More about The Smurfs 2