Review: GROWN UPS 2 Is Somehow Even Worse Than GROWN UPS 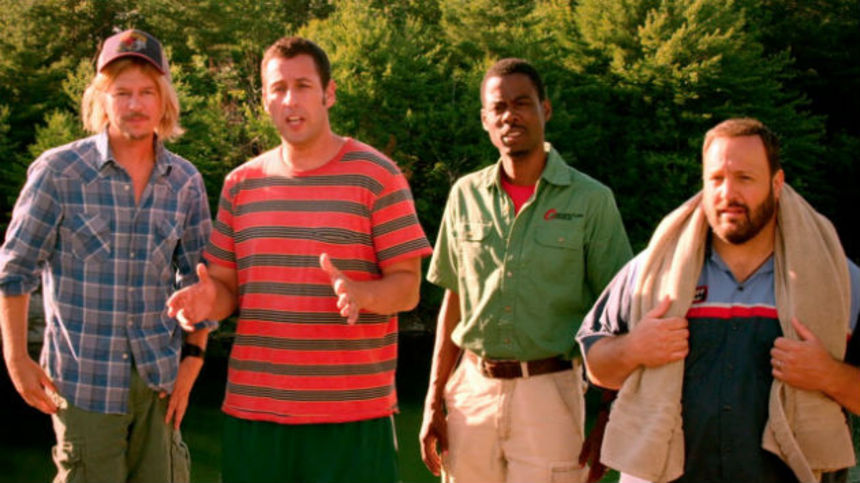 Believe it or not, Adam Sandler has never been in a sequel before. It only seems like it because his movies tend to be interchangeable. He plays a guy who dresses, talks, and acts like Adam Sandler; his real-life friends play the other characters; and it's written, produced, and directed by some combination of the handful of guys who write, produce, and direct everything he does. The movies in which Sandler plays a distinct character (like Zohan, for example) are few and far between. Why bother with voices and costumes when you can just throw on a T-shirt, walk onto the set, and be yourself?

Unsurprisingly, Sandler's first actual sequel, Grown Ups 2, is even lazier, dumber, and less funny than usual. It's worse than most comedy sequels, worse than most Sandler movies, and worse than most food-borne illnesses. It's worse than Grown Ups, for heaven's sake! Written by Sandler and Fred Wolf and directed by Dennis Dugan, this awe-inspiringly pointless dreck takes the easy path every time. There's no plot. Characters and gags are set up without payoff. When they need a few cheap jokes, they throw in a side character who's physically weird -- a really fat kid, a really manly woman -- and take a few cracks at him or her. Anyone desiring a serious education in the fundamentals of how to make a comedy should study Grown Ups 2 as an example of one that does almost everything wrong.

Sandler's character, Lenny Feder, has moved his wife (Salma Hayek) and kids from Hollywood back to the town he grew up in, where everyone he ever knew still lives. (Except for the Rob Schneider character from the first film, who was one of Lenny's four best friends and is now absent and never mentioned, as if he never existed.) The film takes place on the last day of school, with Lenny throwing a "beginning of summer" party at his house tonight. The party is a last-minute idea (note: there's no story-related reason for that to be the case), but word spreads quickly and every person in town shows up in elaborate '80s-themed costumes. The J. Geils band performs too, because I guess Sandler knows the J. Geils band.

But I'm getting ahead of myself. Over the course of the day leading up to the party, the characters go about their lives, having hints of story lines that don't go anywhere:

Eric (Kevin James) sneaks over to his mom's house to spend time with her, which for some reason his wife (Maria Bello) doesn't want him to do. She catches him when SHE shows up to do her mother-in-law a favor, because she likes her mother-in-law and has no issues with her.

It's Kurt (Chris Rock) and his wife's 20th anniversary, but his wife (Maya Rudolph) forgot. This is good for one genuine laugh as Kurt gleefully tells Lenny about the marvelous "get out of jail free card" it represents, and then it never again figures into Kurt's story.

Marcus (David Spade), the womanizing bachelor, is having a visit from a teenage son he never knew he had, Braden (Alexander Ludwig), who turns out to be a terrifying thug with a switchblade. Marcus sends him to school. The school Braden's not enrolled in. On the last day.

Another friend, Nick (Nick Swardson), an improperly medicated schizophrenic, drives the school bus but is too stoned today, so Lenny does it for him. Later, Nick goes to Kmart, disrobes, takes a nap in a display bed, then poops in a display toilet. "Clean-up on aisle 9!" says the store employee. "And bring a shovel!"

There's a scene where everybody goes to Lenny's daughter's ballet recital just to ogle the bosomy teacher, and a few other scenes with similar purposes. If there's one thing these schlubs love, it's beautiful women with large breasts! Don't worry about inequality, though. There's one (1) scene where the wives openly lust after their attractive new gym instructor, Kyle (Oliver Hudson), who it turns out is gay, so, WHEW, it's OK. Later, when Lenny runs into Kyle at the supermarket, his daughter says he's the man Mommy was working out with earlier and had a crush on. Lenny is anxious about this. I'm anxious too, but it's because the daughter was in school at the time and has no way of knowing what Mommy did at the gym. I'm concerned the daughter might be clairvoyant and nobody's getting her the support she needs.

The five main guys -- whoops, I mean four; sorry, Rob Schneider, wherever you are! -- go to the lake they used to swim at as kids and are harassed by a gang of fraternity bros, led by Taylor Lautner and Milo Ventimiglia. Here, at last, the movie has found a target it can really make fun of. Too bad the frat boys' exaggerated, parodic behavior is intentional, while the inconsistent, reality-detached, anything-goes behavior of all the other characters is accidental.

There's an awful lot of business with the second generation of idiots, too: Lenny's teenage son (Jake Goldberg) asking a girl on a date; Kurt's son (Nadji Jeter) taking his driver's test; Eric's tween daughter (Ada-Nicole Sanger) being a kooky individualist with bedazzled boots. Some of these kids are probably good actors, and I hope they get to be in a real movie someday.

Cheri Oteri has a couple scenes as a girl Lenny dated in elementary school who's still obsessed with him. The movie ends without this character or the situation ever paying off -- indeed, without Lenny even realizing who she is.

That's the most striking thing about this rambling, excruciating movie: how many of its gags arise out of nowhere, add nothing, then disappear. They don't move the story forward -- there's no story to be moved -- and they don't contribute to our understanding of the characters or their lives. The movie's very first joke is a perfect example: a male deer wanders into Lenny's house, up the stairs, and into his bedroom, where it rears up on its hind legs and pees in Lenny's face. In a real movie, this would happen not just because a deer peeing on a man is a funny sight, but for some story-related reason: to establish that the family has moved out of the city and into the country, maybe, or that this guy has a fear of animals, or that he's constantly having terrible luck. Why does it happen in Grown Ups 2? Just because.

And that's what I mean when I say the movie is lazy. People who want to make funny movies take pains to ensure, in the writing process, that most of the gags have a story- or character-related purpose. Sometimes they even start at the end and work backwards: Dude, it would be HILARIOUS to see a deer pee on a guy's face, so let's think of a funny sequence of events that would lead to that! The people who made Grown Ups 2 didn't bother. Why go to the trouble of crafting jokes, sight gags, and situational humor when you can make just as much money filming 101 minutes of warm-ups and outtakes?