Review: BENEATH Swims A Line Between Straight-Faced And Winking 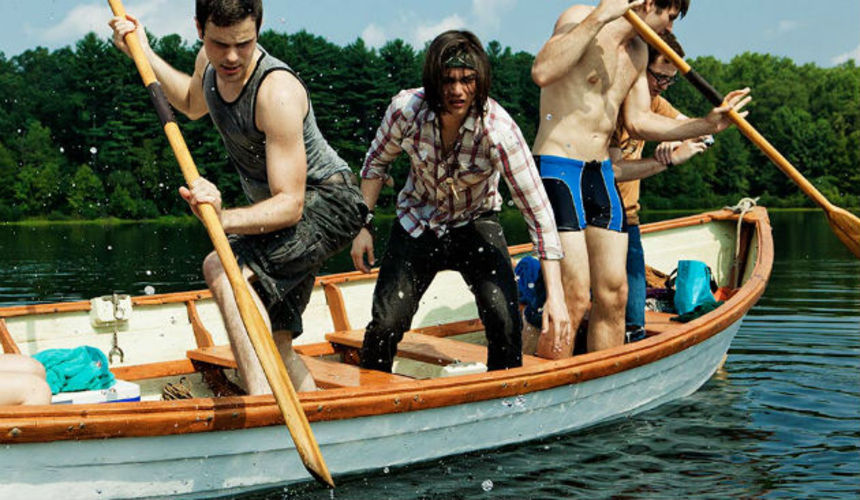 Larry Fessenden takes the old fashioned horror-as-allegory approach to his work. Recently (though Beneath is his first feature in nearly seven years) this has meant adapting the environmental horror aesthetic of 70s films like The Boogens to the present decade by using an inspired minimalism. His technique in Beneath owes more to ʻsuspenseʼ films like The Birds than it does to the explicit gore of more famous 80s slashers and the last decade's torture horror.

Beneath, however, could never be considered a thriller or suspense film because it's plot
seems to have been chosen (from beneath a pile that had lain on the director's desk for years, so they say) for its extremely generic qualities. Six teenagers head out on a small boat to party, but when their lives are threatened by an inexplicably enormous fish their erstwhile hedonism transforms quickly into a vicious mob mentality. The real horror is humans themselves, etc.
The plot isn't what keeps this boat afloat, but it was never intended to. Fessenden's new project is more interesting as an exercise in minimalist filmmaking intended to occupy that increasingly blurry space between film and television and as an act of subtle environmentalist propaganda in a genre that has become so tongue-in-cheek that most messages come out too garbled to understand.

Beneath lays its cards on the table pretty early on. You get a taste of the message to come as soon as the teens cram into the car in the first five minutes on their way to the unnamed lake. They are irritating, sure, and you are forgiven if a lack of patience for the inane dialog inhibits your enjoyment of the film. But Fessenden is an aesthetically rigorous guy. By keeping the kids nothing more than a collection of toned bodies and weakly improvised half jokes and insults, he establishes them as all surface.
There are no depths for the film to explore or even allude to in these characters; the only depths belong to the environment, the lake. Even when their tolerance for each other quickly erodes into homicidal competitiveness and sophistry we get the feeling that the horrible potential of the would-be partyers was so near the surface it could never be what the title Beneath refers to. The binary is between the inevitable death waiting in the murky depths and everything else -- plot, characters, the game of filmmaking itself included.

One reward we do get for having to watch sexist jocks and aggressive nerds pretend to be friends is a laugh or two. The characters are funny because they take their dumb exchanges seriously. 'Crazy to think about -- high school is over,' says Deb during a pre-horror, humanizing swim. 'Yeah that's weird,' replies Kitty, the woman all the boys are crazy for 'Remember that time we went to summer camp when we were 15?' 'Yeah.' And with that, their conversation concludes.
Terrible dialog? To me it seemed more like a riff on the predictability of characterization and the meaninglessness of human interaction. It's a riff that's repeated throughout the movie. When Deb gets her arm bitten reaching for an oar and bleeds to death, the teens ad-lib a cliched funeral oration ("she was brave, a hero") before throwing her body ignominiously to the piranha. When the characters must provide justification to their peers to avoid being thrown off the sinking boat, their reasons for living boil down to "I'm gonna be someone someday" or "I'm strong." Side with the fish and you'll laugh; try and identify with the characters and you're bound to be depressed.

Self-awareness in horror is as big a part of the game these days as the blood, and Beneath walks the line between straight-faced and winking pretty well. Johnny, the one character who the audience might want to root for, is a horror enthusiast and his room is filled with horror in-jokes that I didn't fully get.
Zeke is an annoying filmmaker -- the movie switches occasionally to POV mini-dv cam occasionally for some of his first person narration. Though all the characters (with the exception of Johnny, who is merely weak) have hideous personalities, Zeke the filmmaker is the worst. Fessenden seems to use Zeke to satirize the whole project. While the other characters do seemingly productive things like bail water or paddle with their hands, Zeke just films everything and is responsible for suggesting that the characters vote each other off the boat, Survivor-style.

Through Zeke, Fessenden alludes to the worthlessness of the whole entertainment/filmmaking project. "I'm the only one of you worthless people who will ever amount to anything!" screams Zeke before he's tossed to the fish. Maybe not. When the footage he has shot resurfaces in the third act, what it shows is damning rather than redemptive.
Which brings us, finally, to the monster. It looks ridiculous, like fishes usually do. There's no CGI in the film, and the fish's rubbery aspect and clumsy movements do well to mitigate its onscreen terror potential. But it looks good. Real, like any earth creature would. For those that got turned off monster-horror in the past decade because they couldn't abide characters fleeing endlessly from CGI cartoons, here you go. Fessenden doesn't shy away from showing it, either; it's not the 'mysterious depths' that will kill you, it's a big weird fish with bug eyes. The fact that the teens can't escape from it just 100 yards from shore makes them seem that much more pathetic and rash in their decision to sacrifice each other.

Beneath was financed by Chiller Films, a horror spin-off of the SyFy channel. From my understanding, it is being released both in theaters and on television nearly simultaneously. This is a good idea, and not only because the boundary between television and film is pretty much indistinguishable in all but budgetary terms these days.
On TV with commercial interruptions, Beneath will probably play out like a relatively uninspired but aesthetically pure genre piece. In theaters, Fessenden comes across as more of a budget auteur using horror traditions to tell a story about the complete failure of the human race. The characters' only ambition is to "get outta here." As far as I can tell, "here" is earth and they never do, never will.
Beneath is now playing in select theaters across the U.S.; visit the official site for more information. It will debut on Chiller TV later this fall.
Tweet Post Submit