NYAFF 2013 Review: It's Never Too Late For New Year's Resolutions With COUNTDOWN 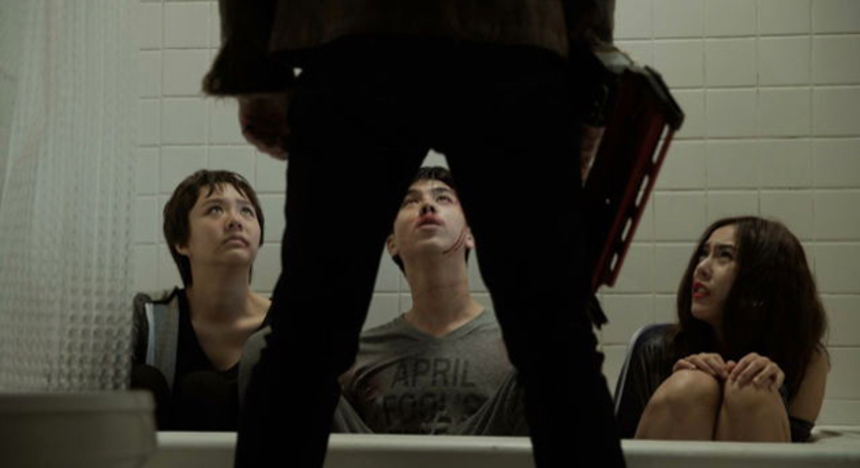 West meets East in this claustrophobic Thai thriller set almost entirely in a New York City apartment on New Year's Eve 2012. The story concerns the redemption of three roommates, and can either be enjoyed superficially as a tense exercise in home invasion (with the aid of a small amount of suspended disbelief), or you can let your inner philosopher run free and interpret the film's cross-cultural pollination as an exploration of Christianity vs. Buddhism.

Jack, Bee, and Pam are all Thai students studying abroad in NYC. Away from their families for the holidays, they have a simple New Year's Eve plan: score some weed and get hiiiiiiiiiiiiiiiiigh. Unfortunately, their regular drug dealer has up and quit the biz. Furthermore, he is moving back home to Thailand and refuses to put them in touch with his source because "dealing drugs is wrong." So the friends decide to take matters into their own hands.

Enter Jesus (pronounced hay-soos), who becomes the group's savior by showing up with the good shit. He whips out a hollowed out Bible full of drugs and proceeds to smoke up his new clients/best friends. Everyone gets really high, and that's when things get really weird.

Maybe it's all the weed they smoke, but Jesus starts to freak everyone out with his talk of humans as cockroaches and pulling dog's teeth, and when they ask him to leave things go from weird to straight-up violent. Turns out, our friendly neighborhood drug dealer is completely unhinged, speaks Thai, and is possibly some sort of trickster god (or devil). And if you weren't already wise to all the Christian symbolism being tossed around, there is also a nail gun.

Now I don't know what percentage of people in Thailand are Christian, but according to Jesus, the country is predominantly Buddhist. So to make the trio "atone for their sins," Jesus has them recite the five precepts of Buddhism (which is basically the Buddhist version of the Ten Commandments). The thing is, Buddhists don't believe in an all-powerful creator, and they believe in Karma, not atonement through blood. So here's a very aggressive character named after a Western deity forcing the fish-out-of-water Easterners to confess their sins or be punished. Is there some nefarious anti-Western sentiment going on here? Or is this just a trippy amalgamated mind fuck?

Don't get me wrong, this isn't a heavy film. It's actually a lot of fun. It's kinetic and hip and makes great use of its limited location. The three friends are equal parts annoying and lovable; you want to see them smacked around but you don't want them to die. Jarinporn Joonkiat, especially, who plays the character Bee, gives a great performance as she is put through her physical and psychological paces.

But the film belongs to David Asavanond, who plays Jesus. That being said, I feel viewers could go either way on his performance. His manic, larger than life drug dealer borders on cartoonish, although I feel it effectively balances his menace. Because who is Jesus, really? Whoever he is, he is playing the role of a drug dealer. And just like Jack, Bee, and Pam are transplants, acting out their idea of how New Yorkers live, maybe Jesus is their idea of a New York drug dealer. When Bee asks him, "Who are you? Why are you doing this to us?" he answers with, "I'm the volcano! I'm the earthquake! I am the fucking tsunami! And I am here to sweep all the motherfuckers like you off the face of the earth, and clean up all the fucking mess that you've made!" I could be wrong, but that's not typical drug dealer talk.

It sounds like a lot to take in, but at a brisk 90 minutes, you don't really have time to contemplate the film's larger meaning until it's over. Once Jesus is introduced (and if you are pronouncing it correctly, that rhymes!) things escalate rather quickly. The fighting is appropriately messy and makes great use of kitchen utensils. The camera dances around the tiny room as it tries to catch it all. Before you know it,  3... 2... 1... the ball has dropped and it's a new year. The ordeal is over. You're left with a fuzzy memory of what could have been the craziest night of your life.

Countdown was a huge hit in its native Thailand. With its liberal use of the English language and its New York setting, it definitely has crossover appeal. I'd love to see it get a US release, but Hollywood would probably just remake it and strip it of all its religious and cultural subtext. So if you're a fan of Asian cinema, seek this one out. It's a taut thriller with the mind of a killer, the soul of a philosopher, and redemption at heart.

Do you feel this content is inappropriate or infringes upon your rights? Click here to report it, or see our DMCA policy.
CountdownDavid AsavanondJarinporn JoonkiatNattawat PoonpiriyaNYAFFThailand