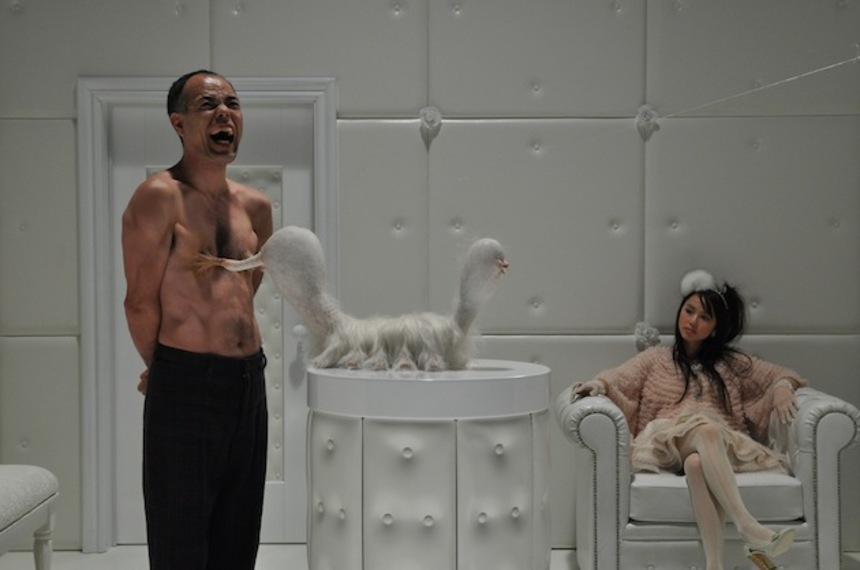 I have a pretty good hunch many of you do.

Good news then, as ScreenAnarchy and the fine folks at Japan Society have teamed up to giveaway double passes to four films playing at this year's Japan Cuts, which in case you didn't know is the New York Festival For Contemporary Japanese Cinema.

But what are the films that you could win passes to? Well, on July 11th at 6pm there's Takashi Miike's Lesson Of The Evil. Then on July 12th at 6pm, we have Sono Sion's new cut of his 1995 flick Bad Film. The Warped Forest (followup to Funky Forest and pictured above) plays July 14th at 12:30pm. Finally, on July 21st at 1pm: The Samurai That Night. All you have to do to enter is email me here under the subject line 'JC Tix' by Tuesday July 9th, along with your full name and preferred movie in the body of the email. Winners will be notified by the morning of the 9th -- good luck!

For more on Japan Cuts, which runs July 11-21, click here, and be sure to keep an eye out for ScreenAnarchy's coverage of the fest starting next week. Below are excerpts from Japan Society's program notes should you need a little more on the films you could win passes to:

LESSON OF THE EVIL

The real Takashi Miike is back! After years of making restrained commission studio works like Hara Kiri, and getting invited to Cannes and treated like a respectable adult, Japan's cinematic wild man Takashi Miike returns. Based on a bestselling horror novel, clean cut pop star Hideaki Ito plays Mr. Hasumi, a young, popular, good-looking teacher at an elite high school. Beloved by his students and popular with pretty much everyone, it turns out Mr. Hasumi is actually a teacher of evil with a fondness for killing his students.

18+ This film is unrated, but may only be viewed by persons 18 years of age and older.

In 1995, director Sion Sono and the performance collective Tokyo GAGAGA made this massive underground science fiction film about a gang war in Tokyo. They shot over 150 hours of footage but ran out of money during post-production. Now, almost 20 years later, Sono has finally finished the film!

In an alternate history 1997, Tokyo is a gangland war zone, divided between feuding factions from the Chinese Baihubang and the Japanese Kamikaze. The Kamikaze prowl the streets in a campaign bus, spewing vitriol from a loudspeaker; their leader is a bald lunatic whose only abiding passion is for a severed pig's head he keeps in a plastic bag. The hyperactive narrator tells us that ancient race hatred is the war's driving force. But when a Kamikaze girl meets a beautiful Chinese junk dealer, a lesbionic Romeo & Juliet story blossoms. Soon, they and the other closeted queers, freaks and cripples of the rival gangs band together to form a more perfect, omnisexual union. It appears that the years of old grudges and mutually assured destruction are at an end. Nothing could be stronger than love. Except hate.

18+ This film is unrated, but may only be viewed by persons 18 years of age and older.

Six years ago, directors Shunichiro Miki, Katsuhito Ishii and Hajime Ishimine teamed up to deliver Funky Forest: The First Contact, a movie so weirdly beautiful, so deeply imagined and so hilariously surreal that it changed lives, cured disease and turned water into unicorn milk. Now Shunichiro Miki, flying solo this time, is back to deliver a film full of nipple guitars, giant store owners, weiner guns and the Pinkie Pankie monster.

THE SAMURAI THAT NIGHT

The samurai of this film may not have a sword or armor, but his connection with death is no less deep. Introverted, bespectacled iron foundry manager Nakamura (Masato Sakai) has been living his life as though he were already dead, since his wife was killed on her way home by a hit-and-run driver five years ago. He deals with her death by obsessively replaying the last message she left on his answering machine, in which she scolded him for eating too much custard. Fresh out of jail, the perpetrator, a brutal young man named Kijima (Takayuki Yamada, the lead of Milocrorze and one of Takashi Miike's 13 Assassins), returns to his habits of behaving badly until anonymous letters arrive, promising "to kill him and then myself" on the anniversary of the crime. Little doubt is left as to the writer, but could the bereft, half-shattered ironworks man truly be capable of fulfilling such vengeance?

Do you feel this content is inappropriate or infringes upon your rights? Click here to report it, or see our DMCA policy.
giveawayjapan cutsjapanese filmlesson of the evilthe warped forest