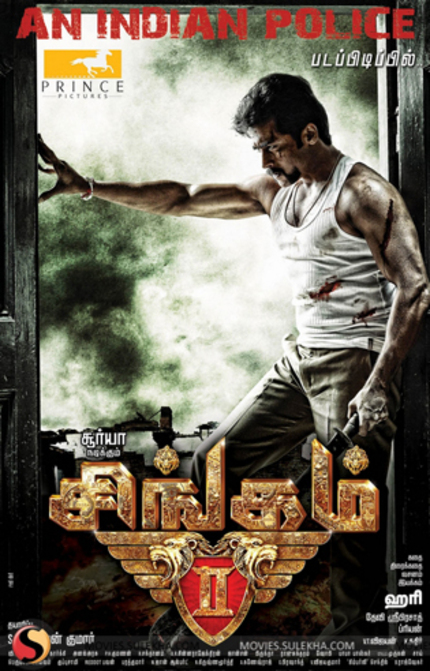 The last time we saw Kollywood's leading action star, Suriya, he was playing kung fu fighting conjoined twins in K.V. Anand's medical action thriller, Maattrraan. That film, while okay, never really delivered on the promise that is inherent in a medical action thriller about a pair of kung fu fighting conjoined twins. This time around Suriya is returning to a role that has become iconic in Singam 2. The first Singam film was a huge success in Kollywood, but inspired an even bigger success story with its Bollywood remake in 2011, Ajay Devgan's Singham. This time around it looks like more of the same, but the first one was ridiculously entertaining, so I'm okay with that.

This first look teaser does exactly what it says on the tin, it teases. Only twenty seconds long, our first look at Suriya in Singam 2 is extremely brief, but certainly hits all of the right spots. The film is currently scheduled for a june 14th release, which means that a longer trailer can't be far behind, and hopefully it expands on the action a bit, because that's really all I care about.

Suriya is a really charismatic guy, and given good material he's capable of filling the screen nicely. Unfortunately, his last two films, 7aam Arivu and Maattrraan, were high concept letdowns. Not bad films, just never quite lived up to their potential. Singam 2 looks more like a more meat and potatoes role for him, and hopefully will satisfy those looking to scratch their south Indian action itch.

Check out the teaser, Singam 2 is due June 14th.

Do you feel this content is inappropriate or infringes upon your rights? Click here to report it, or see our DMCA policy.
HariShivgopal KrishnaSuriyaAnushka ShettyHansika MotwaniVivekActionThriller