Listen to Nick Offerman Talk Bacon, His Status As An American Hero, And THE KINGS OF SUMMER 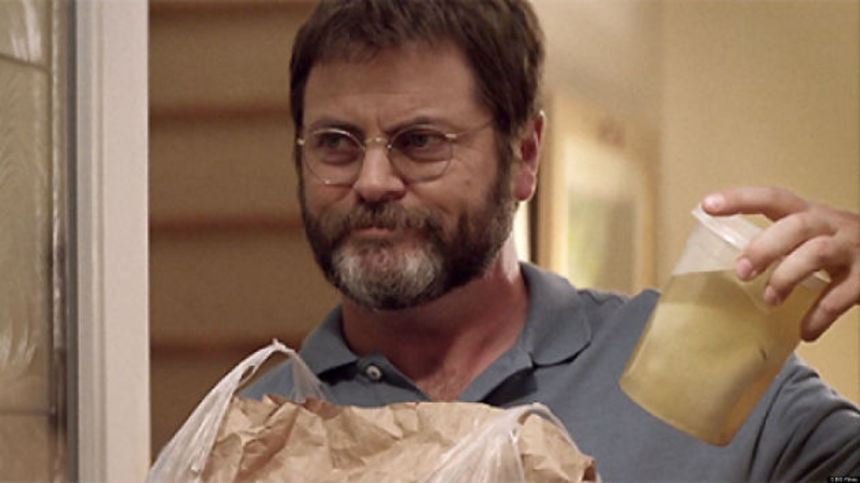 Thanks be mostly to his mustachioed alter ego Ron Swanson on TV's Parks and Recreation (not to mention the fact that in real life he's a master woodworker), Nick Offerman has amassed a great American male mythos. Nay, THE great American male. Like Grizzly Adams and Ernest Hemingway all rolled into one, Offerman is now at the forefront of both the comedy and the pop culture, and seen as an icon of both.

I recently sat down with Offerman ... well, I was sitting and can only assume that wherever he was on the other end of the line, he too was seated to discuss his latest film The Kings of Summer, a nostalgia-infused coming-of-age tale that stands to be a king of summer movies in its own right.

From the very beginning of the interview, in which we assigned each other code names (he, Meadowlark and, I Falcon Smoker) to the best bacon dish he's ever eaten to his own personal thoughts on his newfound great American hero status, I can honestly say this is one of the most enjoyable conversations I've ever had. I will say this to summarize my brief yet meaningful exchange; a conversation with Nick Offerman is exactly what you would expect (and dream) a conversation with Nick Offerman would be. Mr. Offerman, I salute you.

Side note: This is how much of a gentlemen and scholar Nick is. He mispronounced the name of the restaurant where he had experienced said best bacon-infused dish and had the publicist call me back to tell me the correct name of the restaurant so that I could make sure to visit it next time I was in the area. For the record, it's called Cochon Butcher in New Orleans and the dish is a Buckboard Bacon Melt.

You can listen to our conversation in its entirety, via Soundcloud, by clicking the 'Play' button below.

The Kings of Summer opens in select theaters in New York, Los Angeles, and Austin on Friday, May 31, before expanding across the country.

More about The Kings of Summer