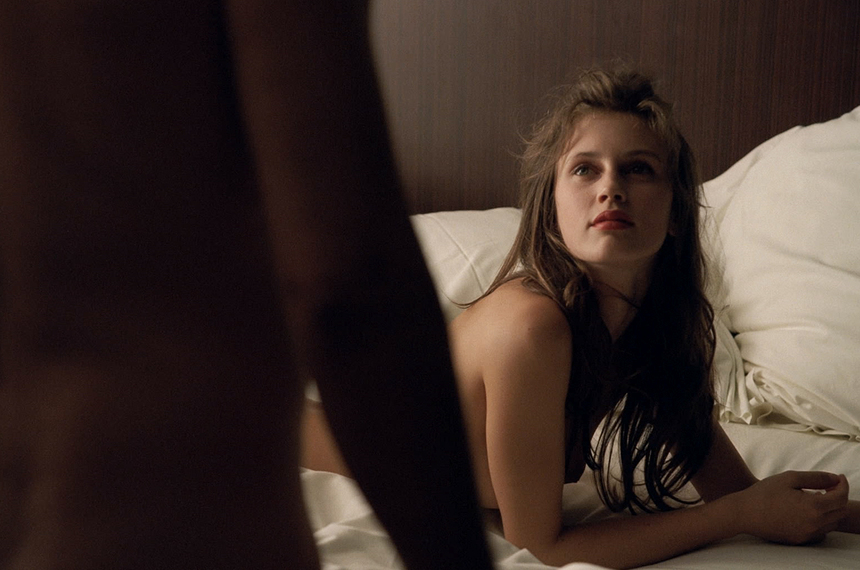 Just when it seemed that every single movie about teen girls coming to terms with their sexuality had already been made, here comes François Ozon's Young and Beautiful (Jeune et Jolie), a well-observed, often fascinating exploration of a 17-year-old girl's willful entry into the world of prostitution. In some ways, it treads similar territory to Julia Leigh's Sleeping Beauty, but whereas that film maintained a detached, ambiguous tone toward the material, Ozon (Swimming Pool) takes the situation into far more unexpected, emotionally challenging places, thanks in part to a spectacular performance by the, yes, young and beautiful, Marine Vacth.Vacth plays Isabelle, a 17-year-old girl in a well-off family, who, as the film begins is still a virgin. That doesn't last so long though, as she more or less sets a personal goal to sleep with a goofy-but-handsome German guy before the end of her family's seaside vacation. It is, as is often portrayed in films, disappointing, a little painful and maybe even a bit traumatic. Nothing new yet. But then cue a François Hardy song and cut from Summer to Fall. Isabelle is now vamped out -- rouge lips, silk blouse and heels -- meeting a very old man who found her through an ad she posted on the internet. For 300 euros, she'll sleep with him, or whoever else contacts her. There will be several more François Hardy cues and season-changes throughout the film, a structural device that occasionally works well (especially the first time), and other times seems like a distracting gimmick. But they do indeed keep the plot moving. The rest of the film's twists, including one real jaw-dropper, are best not revealed here, suffice to say that Ozon ultimately crafts a film that is far more complex than an opaque, matter-of-fact "diary of a teenage prostitute."
Since Isabelle comes from a rich family, she's obviously not doing it for her money. Nor is anyone going to mistake it for some reaction to repressed sexuality and childhood trauma, with her ultra-liberal, understanding mom actually encouraging her to be alone with boys and leaving condoms out for her. There are hints at her seeing it as a way of rebelling against the bo-bo upbringing, or asserting her own sense of control in an environment where everything is always given to her, but ultimately, Ozon wisely understands that sometimes we don't understand why exactly we do what we do... especially when we're 17. Thus, even when someone asks the question "why" point blank, her explanation, however honest it may be, does not tell the whole story.
Throughout, Ozon seems extremely engaged with the material, but never judgemental; not of Isabelle, nor of the people whose lives she affects. He also keeps the story and characters very specific, never advocating any wrongheaded idea that the film might stand for all female sexual awakenings. Vacth helps equally to keep the film afloat, with a mesmerizing, sometimes surprising internalized performance that keeps her character believable and even relatable in the face of some outrageous situations.
However, Ozon's ambivalence doesn't transition so well into one extremely important element of the film: the sex. It's not that he cops out -- there's plenty of taboo-breaking imagery and a fair amount of nudity, but he seems completely confused about how to film it. The film opens with a shot of Isabelle on the beach through a pair of binoculars, a fairly obvious wink at the inevitable voyeuristic aspect of a movie about a beautiful young girl having sex. Perhaps wanting to avoid too much titilation, most of the sex scenes are acted in a bored, un-erotic way... and yet, the postures, the positions and especially the lighting and lenses all suggest softcore erotica. It's as if he left Isabelle's headspace in these scenes and got caught up in his own, and the results are surprisingly flat.
The film's visual style is also a bit disappointing. Not that Ozon has been some master stylist lately, but the mannered, nouveaux French look of the film feels extremely flat compared to the material. Yes, every shot looks nice, and it's all well-lit, but it's the same as nearly every other polite, mediocre French drama of the past 10 years. It would have been nice to see Ozon push the style a bit outside this comfort zone. But it's a minor complaint. If the images don't linger, the questions the film raises about sexuality, compulsion, parenting, self-destruction and redemption certainly will.
Tweet Post Submit

Do you feel this content is inappropriate or infringes upon your rights? Click here to report it, or see our DMCA policy.
Cannes 2013Cannes Film FestivalFrancois OzonJeune et JolieMarine VacthYoung and Beautiful

More about Young and Beautiful