Cannes 2013 Review: Coming to America is Gorgeous, But Slow Business in James Gray's THE IMMIGRANT 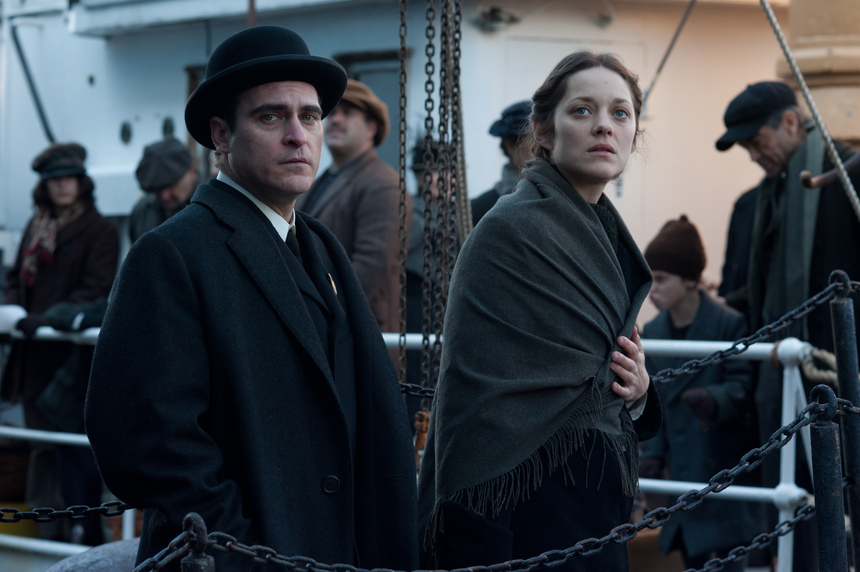 While heralded by a dedicated group of cinephiles in the U.S. (as well as most critics in France), director James Gray has always been more talked-about for his sure hand with actors and drama than for his visual style. Not that he hasn't shown before that he has more sense of mis-en-scene than many celebrated stylists (the rain-soaked car chase in We Own the Night comes to mind), but, perhaps because he's never been as showy as say, Martin Scorsese, or found it necessary to maintain a "signature" visual style from film to film, he's never been lifted to the mainstream upper-echelon of American nouveaux-auteurs.

The Immigrant may change all of that. Here is, if nothing else, a gorgeous movie to look at. Bathed in sepia and soft light, the vision of old New York that Grey and DP Darius Khondji put on screen breathes with a gritty, vibrant romance that puts even Scorsese's Gangs of New York to shame. The aesthetic effect is further intensified by the attention paid to every minute period detail of the sets and costumes.

And yet, while the film boasts great performances, the narrative and overall drama lacks the ferocity, momentum and intensity of Grey's other work. The film follows a fairly basic narrative about a Polish immigrant (Marion Cotillard, speaking great Polish) coming to America, running immediately into hard times and getting swept into prostitution by a skeezy pimp (Joaquin Phoenix). She's focused almost solely on getting enough money to buy her sister out of immigrant quarantine, but soon becomes the subject of affection for not only Phoenix, but also a charming magician played by Jeremy Renner.

Gray usually excels at taking these simple conflicts and elevating them to Shakespearian levels of drama. In fact, each of his previous films, from Little Odessa to Two Lovers takes a concept that could be summed up in a sentence or two, then masterfully deepens the psychological implications and the external drama, with a fine attention to character detail. The bursts of violence are then more affecting than they otherwise would be, and even more impressively, the quiet (or loud) scenes between the characters are usually the most gripping parts of the film.

But The Immigrant never quite finds it's narrative footing. The plot and character development feels scattered rather than forceful, and developing the emotional depth of the characters often takes a back seat to surface-level narrative turns and constant location-changes. Moreover, the humor and sense of play that complimented Gray's melodrama so well in Two Lovers is completely absent here, replaced with little besides brooding, desperation and anger to carry the plot. As usual, bad things happen and people change and reveal unexpected sides of themselves, but it all feels strangely lifeless.

The performances, however, are uniformly excellent. Cotillard does perhaps the heaviest-lifting, but, while he plays the desperate, conflicted sleaze-ball that he's done well before, Phoenix still manages to steal the show by sheer force of screen presence. Renner takes a welcome, charming turn here too, doing excellent work as a charming extrovert, perhaps his first performance since all of the post-Hurt Locker typecasting to really show off his range as an actor. But without a tight, compelling narrative, their great work becomes more of a series of actor-showcases than unified performances.

This is, at least, my first impression of the film. However, while I generally think that great movies should transcend whatever baggage, emotional or situational, that an audience member brings to the theater, I must humbly admit that, on the tenth day of a non-stop festival like Cannes, at an 8:30 screening, I can't completely push aside the fact that my own exhausted, attention-deficit state of mind may have played a role in the lack of momentum and urgency I felt during the film. There's certainly enough to appreciate here to make me keen to revisit the film, but as it stands, I kept waiting for the film to shift into high dramatic gear for more than one scene at a time, and sadly, found myself still waiting as the credits rolled.
Tweet Post Submit

Do you feel this content is inappropriate or infringes upon your rights? Click here to report it, or see our DMCA policy.
Cannes 2013Cannes Film FestivalJames GrayJeremy RennerJoaquin PhoenixMarion CotillardThe Immigrant

More about The Immigrant