Review: TRANCE Juggles All The Elements, Drops The Ball 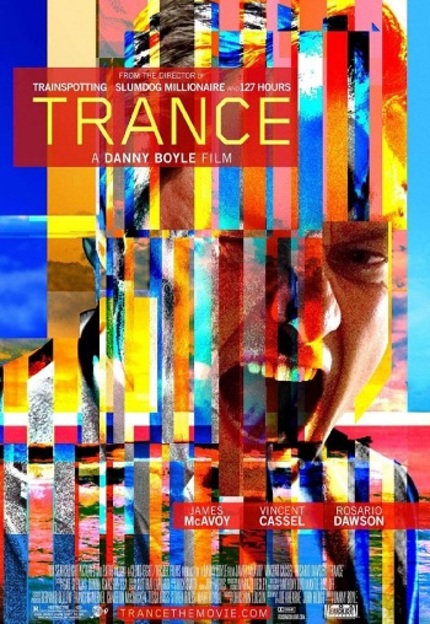 Trance is the latest genre-riffic attempt from wunderkind Danny Boyle, the director that came into mainstream acclaim from Slumdog Millionaire but was making great films well before. Stuck in a 90's state of mind, Trance follows Londoners connected in a twisted thread of crime, deception and sex.

An insider heist of a painting at an auction goes purposely wrong and recent amnesiac Simon (James McAvoy) is left holding the 'bag' as furious uber-criminal and club owner Franck (Vincent Cassel) coerces the poor lad into seeing a shrink (Rosario Dawson as Elizabeth) in an attempt to unlock his memory and thus they key to where the damn painting is. This is merely the icing on the brain cake, however, as each character knows far more than they let on and it is not long before already fragile trusts are put to the limit as Simon comes closer to understanding what happened.

Frankly, all of the elements are there for me to dig Trance. Mind altering, trippy madness? Check. Vincent Cassel in hardboiled mode? Check. A heist-based narrative? Check. But the plotting and pacing is so poorly strewn together that all these cool elements collapse in a messy psycho-sexual heap and the film becomes cluttered with sudden and overt twists that are poorly handled. The script is lousy, riddled with nonsensical, illogical and poorly planned out scenes, it has an immature temperament about it. It does not help of course that Boyle has made the film feel quite dated too. From some of the effects and locations to the broadly configured characters, there is a feeling of been there, done that and wrong decade.

Essentially the character of Elizabeth is the wrecking ball, bringing the movie crumbling down with her inert presence yet overwhelming control of the narrative. When the twists happen, particularly the ones involving her, they come so thick and fast that you kind of just numbingly accept them. All of the characters do have gaping issues though, and they hamper the film considerably. There is just nobody to really like or root for, you just wind up not caring about what happens, and the mystery of the painting becomes secondary to the strange cat and mouse relationships that develop. The sexual element in Trance is jarring and causes a huge tonal shift. I had trouble realigning with the main story because of it.

Boyle's direction and cinematography is still great, as is the score composed by Underworld's Rick Smith, but standing next to masterworks like Trainspotting it is hard to appreciate Trance as anything other than pedestrian.

Trance is out in cinemas in Australia on April 4.