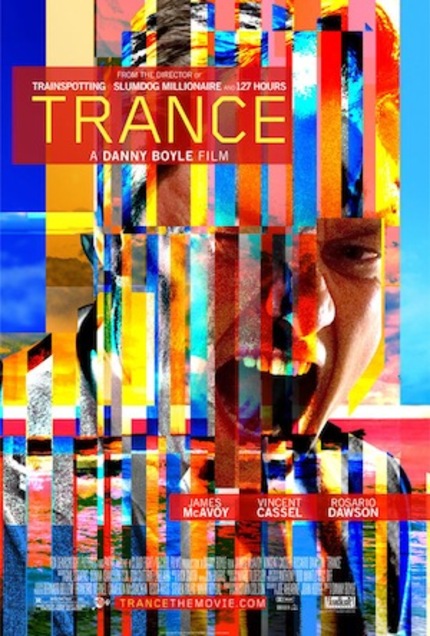 Well of course you do. After all, it's a new movie from one mister Danny Boyle. So here's what's up: ScreenAnarchy has Ten pairs of Run-Of-Engagment passes to give away to folks who live in the NYC area. All you have to do is head on over to Twitter and RT this article, including the handle @ScreenAnarchy and the hashtag #TranceTwitchNYC. Do this by April 5th and you're in the running for a pair of passes. Winners will be notified over Direct Message on Twitter.

Trance opens in limited release in the US on April 5th. Also, if you're in NYC and don't necessarily want to wait for free passes to see the film, then I suggest you try and attend one of three screenings where Danny Boyle himself will be participating in Q&A's. The first is the AMC Lincoln Square after the 7:15PM show (you can buy tickets here). If you're unable to attend that one, there are two other Q&A's the next day, Saturyday April 6, after the 7PM and 8PM shows at the Angelika Film Center in Soho. You can buy tickets for both showings here, and be quick because they are sure to sell out.

Academy Award® winning director Danny Boyle crafts a wildly twisting mind puzzle exploring identity, madness and perception via the altered state of hypnotic trance.  Between the razor-thin lines of our dreams, desires and darkest impulses, our everyday realities vanish, leaving only the question of who or what can be trusted. In TRANCE, Simon (James McAvoy), a fine art auctioneer, teams up with a criminal gang to steal a Goya painting worth millions of dollars.  After suffering a blow to the head during the heist, he awakens to discover he has no memory of where he hid the painting.  When physical threats and torture fail to produce answers, the gang's leader Franck (Vincent Cassel) hires hypnotherapist Elizabeth Lamb (Rosario Dawson) to delve into the darkest recesses of Simon's psyche.  As Elizabeth begins to unravel Simon's broken subconscious, the line between truth, suggestion, and deceit begin to blur.

Do you feel this content is inappropriate or infringes upon your rights? Click here to report it, or see our DMCA policy.
Danny BoyleJames McAvoyRosario DawsonthrillerTranceVincent Cassel