Review: SCARY MOVIE 5 Contains No Laughs But Much Poop 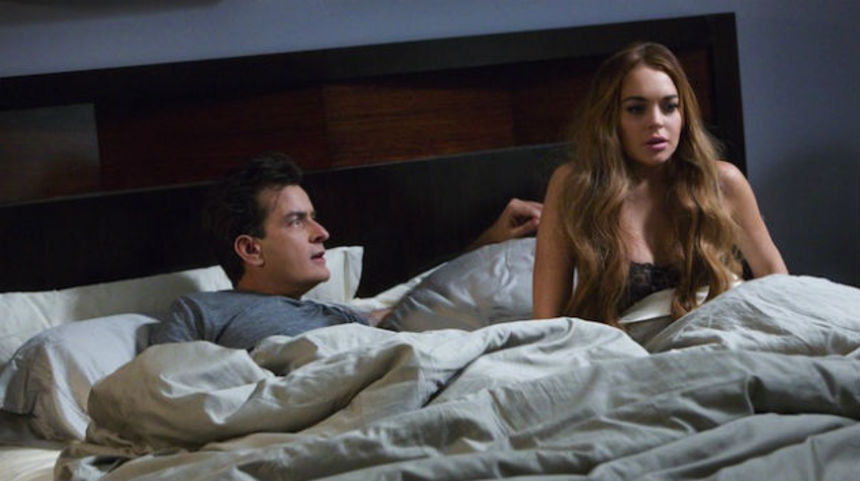 I'd be tempted to say that nothing in Scary Movie 5 is funny, but the outtakes that play over the closing credits show multiple cast members struggling to keep from laughing, so obviously I'm mistaken. Clearly the film is hilarious. Maybe there was a problem with the projection at my theater?

Because what I saw was a boldly uninspired torrent of halfhearted slapstick, interminable poop jokes, and pointless pop-culture references, a veritable tsunami of idiocy cutting a swath of disgust and boredom across the landscape. That it should have been produced and co-written by David Zucker -- one of the minds responsible for Airplane!, Top Secret!, and Naked Gun, and the guy who revitalized the Scary Movie franchise -- adds a tinge of sadness to it. Then again, maybe it's fitting that the man who helped invent the spoof genre would be responsible for killing it.

Not that the blame is his alone, of course. He and co-writer Pat Proft (another comedy veteran), along with director Malcolm D. Lee (Undercover Brother), were subject to the whims of studio executives who dictated which movies they needed to spoof for maximum audience appeal. And by "spoof" I mean "recreate and add poop." Poop is the magic ingredient for successful parody, as you know. How do you satirize Paranormal Activity? Why, you add poop, of course. And what about Black Swan, Inception, 50 Shades of Grey, and Rise of the Planet of the Apes? That's a trick question. You don't spoof them at all, because they're not horror films and have no place in a horror spoof. But if the men who wear suits and write checks tell you you HAVE to include them, you add poop.

I'll spend a paragraph telling you the plot, thereby giving it more attention than the filmmakers did. Jody (Ashley Tisdale) and her husband Dan (Simon Rex) become the caretakers of Dan's brother's children, and creepy things start to happen in their house. That's Mama (released three months ago) and the Paranormal Activity franchise. To bond with one of the little girls, Jody resumes her ballet career (there's your Black Swan), which leads to nothing worthwhile in terms of story, parody, or laughter. The family's hispanic maid (Lidia Porto) is fat, has hairy arms, wears a bikini, and farts so hard she blows herself off the toilet. I don't know what movie that's a reference to, but the presence of farts and toilets makes it COMEDY GOLD®! 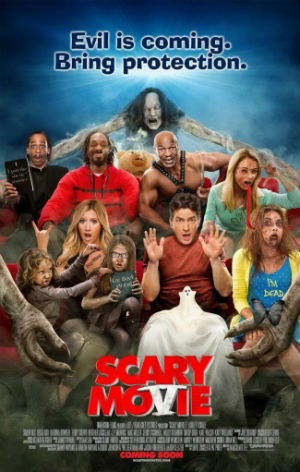 There is a section based on Evil Dead where Jody and her ballet friend Kendra (Erica Ash, in a role clearly intended for Scary Movie stalwart Regina Hall, who declined to appear) stand in the basement of a cabin and recite the evil-summoning incantation, causing the teens upstairs to mutilate themselves. Then they speak the word that ends it, and the teens go back to normal. Then Jody and Kendra, unaware of what's happening above them, summon the evil again, then end it, then summon it, then end it -- back and forth like that for what must be only three or four minutes but which feels an eternity.

The movie is 80 minutes long, including the 10 minutes of credits and outtakes. So the movie is 70 minutes long. Three or four of those minutes are devoted to repeating the gag where the girls unknowingly wreak demonic havoc on teens in a cabin. That's not to mention the film's opening sequence, in which Charlie Sheen and Lindsay Lohan make a sex tape. "I have a court date in the morning," Lindsay says, just one of several thousand lines she and Charlie have that make reference to their real-life misadventures. You know how Charlie Sheen is currently being talked about by all of America, right now, this very minute -- er, sorry, two years ago? That's why. He's so "of the moment" (the moment being spring 2011).

A curious number of the film's gags center around hitting Simon Rex in the head or groin. Admittedly, the physical abuse of Simon Rex is pleasing. But it is a sad commentary on the state of 21st-century spoofery when that's all anyone can come up with for making fun of Paranormal Activity. Same goes for the dumb subplot where Rex's character works with intelligent chimpanzees, all of which -- I need hardly tell you -- are highly interested in poop. What kind of sick world do we live in where EVEN MONKEYS ARE NOT FUNNY?? Have you no sense of decency, Dimension Films and The Weinstein Company? At long last, have you left no sense of decency??

Scary Movie 5 opens wide in theaters across North America today (April 12). You have been warned.