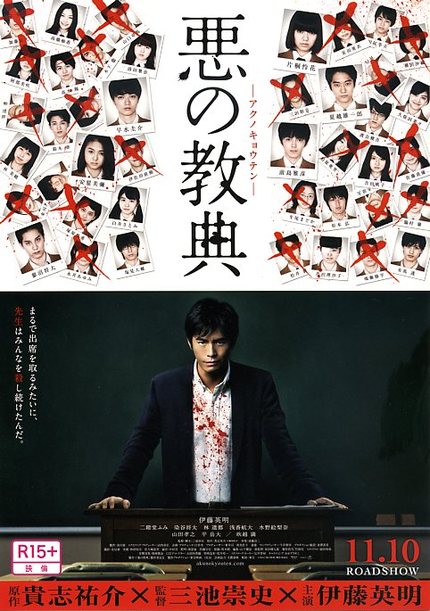 Miike Takashi's latest high school flick opens as a serious examination of fractured teacher-student relationships, before warping into a deranged and insanely violent black comedy when the charismatic English teacher reveals himself to be a gleefully prolific serial killer.

If nothing else, Japanese director Miike Takashi can always be relied upon to surprise his audience. With close to 90 titles already on his resume, the 52-year-old director is as hard-working as ever, releasing three films last year and with at least two more nearing completion. After making his name with extreme titles like Audition, Visitor Q and Ichi the Killer, Miike's filmography has become as diverse as it is busy. In recent years, he has delivered goofball children's comedies like Yatterman and Ninja Kids! as well as stately, austere epics like 13 Assassins and his remake of Kobayashi Masaki's classic Hara-Kiri. Miike's latest offering returns him to the corridors of high school, where he has previously found success with Crows: Zero and last year's musical For Love's Sake.

Lesson of the Evil introduces us to the handsome and exceedingly popular English teacher, Mr. Hasumi (Ito Hideaki), whose enthusiasm in the classroom engages even the most noncommittal of students, while his pastoral attentiveness sees girls and boys alike flocking to him for help and advice on everything from bullying to romance. Hasumi's charms even extend to the staffroom, where he is spearheading a new anti-cheating crackdown.

When a group of girls approach Hasumi with news that one of their classmates, Miya (Mizuno Erina), is being sexually assaulted by their gym teacher (Miike regular Yamada Takayuki), he gives smart advice that seemingly solves the situation. However, when he then sleeps with Miya himself, we begin to see the cracks behind his million dollar grin. Soon enough, an incensed parent, convinced his daughter is being bullied and unsatisfied with Hasumi's response, soon dies in a fire. We discover that while projecting an image of well-groomed success, Hasumi lives in a close-to-derelict outhouse on the outskirts of town and is increasingly obsessed by a pair of large crows outside his window. Soon he has aroused the suspicions of bookish Physics teacher, Tsurii (Fukikoshi Mitsuru), who begins to dig around in Hasumi's past - revealing frightening truths that soon enough erupt to the surface.

Miike is in no rush to reveal the extent of Hasumi's psychosis, and barring a few abstract flashbacks early on, it is not until the second half of the film that we really see who this guy is and exactly what he is capable of. That said, Miike's film does side with the theory that some people are just born evil, rather than turned into monsters by decades of abuse or neglect. However, the suspicion is that Miike is less interested in giving a lesson in human nature as much as he wants to return to his roots and let rip with a triumphantly bloody and humourous slice of exploitation.

On one level, the film plays like a wish-fulfillment fantasy from a frustrated educator. Having spent a few years teaching high school English myself, there were certainly days when the incessant sarcasm, laziness and nonchalance of a classroom full of teenagers came close to inspiring exasperated thoughts of violence towards minors. Even the enthusiastic kids can on some days be too much to bear. In Lesson of the Evil, once Hasumi tips over from calculated disposal of those in his way to indiscriminate genocide with a shotgun, empathy is no longer an option. The film becomes so jaw-droppingly absurd that you can only laugh as Hasumi tosses a petrified teen over the banister before ventilating her study mate.

Comparisons will doubtless be drawn between Fukasaku Kinji's Battle Royale for its extreme violence towards school children, and the vengeful teacher of Nakashima Tetsuya's Confessions, and while Lesson of the Evil should appeal to exactly the same crowd for exactly the same reasons, I don't think it is as accomplished as either of its predecessors.  The tone of the film veers wildly from straight up drama in the opening act, to the murky realms of a serial killer thriller, before it finally explodes into a pantomime of violence in its final stages. There are even moments of genuine fantasy - not least when Hasumi's shotgun mutates into a living thing, with eyeballs, a mouth and urges him on in his parade of killing. There is something wholly Cronenbergian - with a hint of A Nightmare on Elm Street - about the sequence, that not only betrays our protagonist as a full-blown looney tune, but illustrates to the audience that we should not be taking any of this very seriously.

While the cast includes a number of familiar young actors in the "hero" roles of Hasumi's students - in particular Sometani Shota and Nikaido Fumi from Himizu - as well as Yamada and Fukikoshi as his fellow teachers, Lesson of the Evil is Ito Hideaki's show all the way. He sells Hasumi so well as a charismatic dream teacher that even when you see him exploit his position, betray the trust of his pupils and embark on his bloody odyssey of inexplicable carnage, you don't hate him, but look on in baffled disbelief, much as those around him do. It is simply unbelievable.

Sadly, I can't imagine Lesson of the Evil getting much of a release in North America, what with the region's sensitivity towards gun violence and school shootings, but for those who enjoy their humour jet black and their violence extreme, this is definitely a film worth seeking out. It isn't perfect by any means. At 129 minutes, it is way too long, and a number of flashback sequences fall almost into self-parody due to some shamefully untalented foreign actors, but it has been some time since Miike got his hands this dirty, and Lesson of the Evil states in no uncertain terms that he's still got guts where its counts - namely, smeared all over the classroom walls.

Lesson of the Evil

More about Lesson Of The Evil