Review: EK THI DAAYAN Is Better Than It Deserves To Be 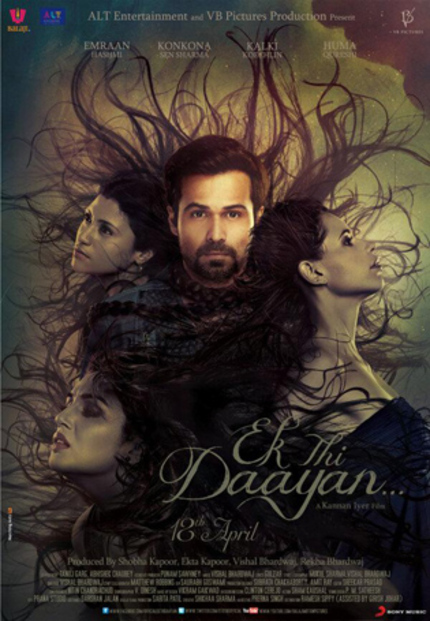 It's been a strange few years for Bollywood's kissing bandit, Emraan Hashmi.
The actor became prominent in the last decade for his willingness to plant his lips on anything that moved on screen, an action still not entirely common in Hindi films. Some might say that he's helped push Hindi cinema into the 21st century with his progressive take on personal relationships. It hasn't helped, though, that the films in which he's plied his trade are mostly B- and C-grade schlock, at least until recently. Over the last couple of years, Hashmi has made a serious turn toward earning respect in films like The Dirty Picture and especially last year's Shanghai, in which he was absolutely fantastic. However, in the time since that film he's made a couple of trashier horror films (ahem, Raaz 3), and Ek Thi Daayan is something of a mix between his past and present.

Ek Thi Daayan (There Once was a Witch) is a generational story of a man and the demons, both literal and figurative, he must face. Hashmi plays, I kid you not, Bobo the Baffler, one of India's most famous magicians. Bobo is also one of India's most tortured souls, as his fiancée Tamara (Huma Qureshi of Gangs of Wasseypur) will soon find out. When he tries to deal with his own past by visiting a family friend who happens to be a psychiatrist, the resulting hypnotherapy session unlocks a decades old mystery surrounding the death of his father and sister at the hands of a shape-shifting witch named Diana (Konkona Sen Sharma of Luck By Chance). He's soon convinced that Diana is coming to get him when he meets an Indo-Canadian tourist named Lisa Dutt (Kalki Koechlin of That Girl in Yellow Boots) who seems to be a reincarnation of the witch from his past. When Bobo loses his mind, he also begins losing the faith and respect of everyone around him, but is he really crazy?

Traditionally, Hindi horror stories have been the province of the sleazier fringes of the Bollywood business, but Ek Thi Daayan has a surprisingly impressive team behind it. The film was produced, written, and scored by Vishal Bharadwaj and directed by first timer Kannan Iyer. Even the cast is made up of actors, apart from Hashmi, who don't typically take roles in horror films. This pedigree certainly lends a bit of credibility to the action on screen if you know the players involved. To be honest, the talent on screen definitely brings the quality level up several notches from other Hindi horror films I've seen in terms of realism and the ability to keep me from rolling my eyes. Sure, there are a few misfires here and there, but overall Ek Thi Daayan is better than I had ever expected.

This could have been a very run of the mill cheesy horror movie, and it does have its digressions, but the cast keeps the film engaging throughout with performances that don't feel as if they know they're in a horror film. Hashmi's performance is by far the most prominent, if only because he's on screen for most of the film -- apart from an irritatingly long flashback sequence -- and he definitely works well as the audience surrogate. We rarely know anything more than he does, which is an effective tool in horror to keep the audience engaged.
Even the witches / ladies of the film manage to keep things engaging and the level of melodrama and overreaction to a minimum until the fantastically daft climax that looks like something out of Rosemary's Baby. Sen Sharma, Koechlin, and most of all Qureshi ground this fantastical story in reality in a way that most Bolly-horrors don't bother doing. This is definitely a film that I would recommend to Bollywood newbies with only the slightest of reservations.

As an aside, I really wish that someone would tell writers in Bollywood that not every flashback has to be a Godfather Part 2 scaled epic. It is a plague in Hindi cinema, and one reason that films are routinely more than two and a half hours in length. Ek Thi Daayan contains an expository flashback in the first half that runs approximately 40 minutes. It tells us everything and spells out facts that the audience should be left to figure out on its own. Along with some pretty ineffective CG (sadly par for the course in India), this was my major complaint about Ek Thi Daayan. I liked the film, but I would've liked it more with better pacing.

I've come to grips with the fact that horror is not a genre on which many of the big money men in Bollywood are willing to take chances. I'm not sure that Ek Thi Daayan is going to be a watershed moment in that fight, but it is certainly a step in the right direction. When you give good material to good talent, cast and crew included, they can make great things happen. This is no Exorcist or Silence of the Lambs, but it's definitely a step in the right direction.