Korean Box Office: G.I. JOE 2 Wipes Out the Competition, or Was It Lee Byung-hun's Abs?

Spring is in the air following a long winter and as a result Korea's multiplexes saw a dip in admissions. Hollywood took back the top spot during the weakest frame in quite some time as only 1.64 million tickets were sold. Moreover, due to the new foreign number 1, only 42% of admissions were occupied by local releases. Following a huge winter for the Korean film industry the outlook for local productions is a bit weaker for the coming months as people will enjoy the great weather before the sweltering summer will force them back into the theaters. 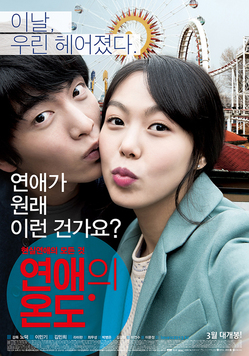 G.I. Joe 2 (and Lee Byung-hun's abs) powered to a strong start with 708,267 admissions, which was in line with the first installment's debut in 2009. Hard to say whether Lee Byung-hun's (A Bittersweet Life) presence boosted sales but it certainly didn't hurt. Local advertisements featured him front and center, though his is screen time is relatively small. However, a Korean action film is hitting screens next week and may hurt G.I. Joe's prospects going forward.

Korean romcom Very Ordinary Couple starring Kim Min-hee (Helpless) and Lee Min-ki (Quick) brought in another 361,060 admissions as it slowed only 33%. Word of mouth is strong on the pic, which is now well over the one million admissions mark. It stands a good chance of going over the two million mark.

My Paparotti, the against the odds odd couple drama starring Han Suk-kyu (The Berlin File) and Lee Je-hoon (The Front Line) also experienced a soft 30% decline for 236,094 and will also be looking to cross the two million milestone in the coming weeks.

US zom-rom-com Warm Bodies took in another 107,218 as it made it over one million but should fall quickly from here on out. 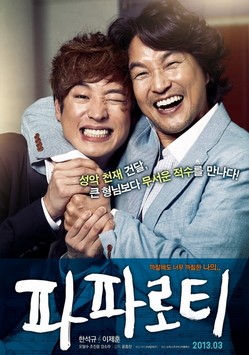 The hit local gangster film New World, starring Lee Jeong-jae (The Thieves), Choi Min-sik (Oldboy) and Hwang Jeong-min (The Unjust) dropped 50% and wound up with 104,099 admissions as it makes its way out of theaters. With over 4.5 million spectators to date, a rumored sequel seems very likely.

Further down at number 10, the hot arthouse pic Jiseul drew in 13,907 viewers and made it over the 50,000 mark, traditionally seen as an enormous benchmark for independent films. O Muel's Sundance Fest award-winning film still has a way to go and could cross 100,000 though I think that's a stretch.

Looking ahead to next week we have a number of mid-level US releases (The Host, Killing Them Softly, Hope Springs, Broken City) that are unlikely to shake up the charts. On the Korean side, April 4 will see the release of the Shin Ha-gyun (Save the Green Planet) action vehicle Running Man, notable for being the first local film entirely funded by a US studio (20th Century Fox), and the Min Gyu-dong (All About My Wife) erotic drama In the End Is My Beginning, reuniting Uhm Jeong-hwa and Hwang Jeong-min, the leads of Dancing Queen. Running Man has been getting plenty of air time but it is going up against G.I. Joe and a lot of negative writeups. The drama In the End Is My Beginning may not get a large release as I have seen few advertisements for it.