Dallas IFF 2013 Review: KON-TIKI Proves To Be Rewarding and Full of Lessons 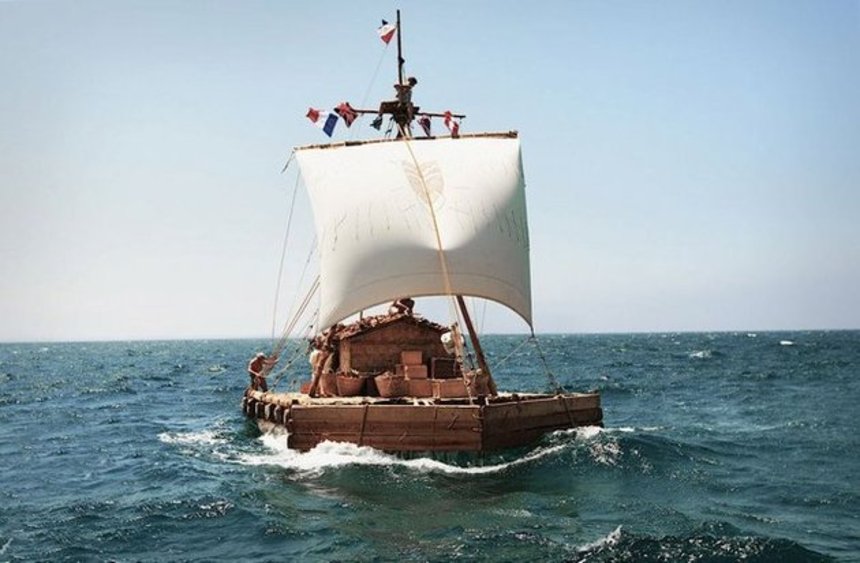 If you take anything away from Kon-Tiki, it's how amazingly brave the pioneers of exploration were. The film revolves around a Norwegian man's obsession with proving that someone used a raft--not a sailboat or anything with the ability to steer--to drift from Peru to Polynesia across nearly 5,000 miles of open ocean. The idea that anyone would set out to sea on a raft made of balsa wood logs strung together with rope was a daunting task in 1947, let alone a thousand years before. Having his theory nearly laughed at by everyone he approached, Thor Heyerdahl (Pål Sverre Hagen) decided to show that he and five other crewmen could recreate the raft and their methodology to make the journey themselves. If that idea sounds preposterous, the journey proves even more outlandish.

The film appears to be a genuine Norwegian production, with directors Joachim Rønning and Espen Sandberg leading a group of Norwegian actors, with blue eyes and blonde hair. That's an important detail to note amidst Hollywood casting nearly anyone that would sell a ticket above what race they are supposed to represent. Curiously, though, the film is in English throughout. There's also beautiful cinematography throughout, and the interactions with the wildlife of the ocean leads you to believe it truly is a journey you're witnessing. Just as special mention had to be made for the VFX of a film like Life of Pi, which the film has quite a bit in common with, the same has to be said for Kon-Tiki and the effects work of ILP VFX.

The journey, we slowly learn, was almost dead in the water before it even began. Thor is an idealist and relentless in his pursuit of proving his theory correct. He tries the academic way, shaving his beard and looking dapper, but no one believes him. His drive isn't about to let that stand in his way though and when he meets refrigerator salesman Herman Watzinger (Anders Baasmo Christiansen) he decides to skip visiting his wife and fellow adventurer Liv Heyerdahl (Agnes Kittelsen) and their two children in pursuit of his dream. So they buy a ticket to Peru where they meet his crewmen Bengt Danielsson (Gustaf Skarsgård), Torstein Raaby (Jakob Oftebro), Erik Hesselberg (Odd Magnus Williamson), and Knut Haugland (Tobias Santelmann). The catch here is that Thor wants to recreate the trip of the original Kon-Tiki with exacting detail, and faithfully relies on the methods he thinks they used back then. His crew gradually begins to wonder just how disastrous the whole expedition might be once they are out to sea with no way back.

We love Thor for his dreamer charisma. He's got a seemingly unlimited amount of faith in people and his theories. There's no wonder why he could get a crew to join him but it's put to the test by Mother Nature. Should I mention that they have some interactions with sharks? Of course I should. The ever-present bad guys of the ocean, the sharks here are single minded. They don't want to play; they want to eat. One can't help but feel a personal attachment to the crew, though, and the danger they present makes things feel personal when it shouldn't. The six sailors are in their territory and we are at their mercy. But the ocean isn't just about danger. We also see beauty.

Sometimes it is in the grace and enormity of whales, and other times it is in the luminescence of the waters at night. These sequences remind one specifically of Life of Pi, and particularly when they discover flying fish. A film that clocks in just less than two hours has to give a lasting impression. I want something more than sheer entertainment that will fade away the moment I leave the theater. Thankfully Kon-Tiki gave me what I desired. Hopefully you find the journey equally as pleasing and learn that you want no part of being out on sea in a raft.