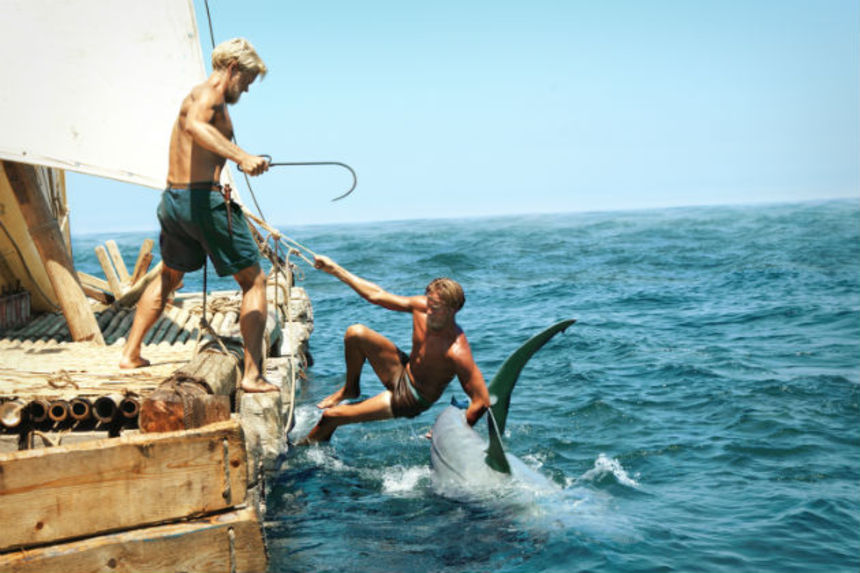 "If you take anything away from Kon-Tiki, it's how amazingly brave the pioneers of exploration were."

That's how Bill Graham began his review of Kon-Tiki, which we published recently during the Dallas International Film Festival. The film, directed by Joachim Roenning and Espen Sandber, opens in limited release in the U.S. on Friday, April 26. As a brief refresher course, here's the set-up:


The film revolves around a Norwegian man's obsession with proving that someone used a raft -- not a sailboat or anything with the ability to steer -- to drift from Peru to Polynesia across nearly 5,000 miles of open ocean. The idea that anyone would set out to sea on a raft made of balsa wood logs strung together with rope was a daunting task in 1947, let alone a thousand years before. Having his theory nearly laughed at by everyone he approached, Thor Heyerdahl (Pål Sverre Hagen) decided to show that he and five other crewmen could recreate the raft and their methodology to make the journey themselves. If that idea sounds preposterous, the journey proves even more outlandish.

Is the journey worth taking? Bill concluded:


A film that clocks in just less than two hours has to give a lasting impression. I want something more than sheer entertainment that will fade away the moment I leave the theater. Thankfully Kon-Tiki gave me what I desired. Hopefully you find the journey equally as pleasing and learn that you want no part of being out on sea in a raft.

You can Bill's review in its entirety right here.

And more information about the film can be found at the official U.S. website.