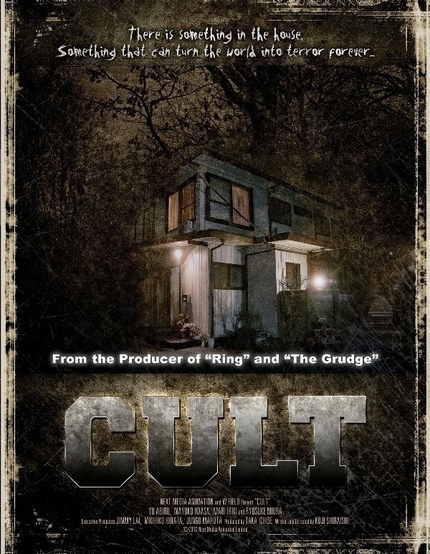 Those miffed by the fact that the monsters in Apollo 18 turned out to be moon rocks with legs will likely be even more enraged by antagonists of the Japanese found-footage horror film Cult. Granted, I never actually saw the evil moon rocks movie, but I'm guessing that those walking pieces of granite couldn't possibly less frightening than the nondescript, floating CGI earthworms in this one.

These earthworms are, I think, demons. They enter and exit hosts with little fuss and a soft noise that sounds like a combination of a "whoosh" and a "slurp." Sometimes they just float around the hallway and have what appear to be floating earthworm meetings.

So no, Cult is not a very scary movie. That said, I'm not sure that it's actually trying to be. In fact, by the end, I was completely baffled about its intentions. While the film is ultimately too middling to fully recommend in a "so-bad-it's-good" type of way, it's also a too wacky to completely dismiss.

The plot follows three aspiring actresses who get hired to appear in a TV special about a psychic master exorcising some demons at a house shared by a kind, timid mother and daughter. The girls aren't crazy about this idea, but they aren't too sharp either, and besides, it's work. So off they go to meet the psychic master.

The first thirty or forty minutes of the movie have a sly, comedic brilliance. Imagine the setup of every other found footage movie filtered through the uniquely Japanese sense of humor that has buoyed many of the nation's films for the last 30+ years, from Hausu to The Funky Forest: The First Contact. Everyone's aping for the camera with a mix of absurdity and naivity, and when these hammy performances are contextualized with the fact that they all know they are being filmed, it's actually hilarious. There are also a number of clever absurdist touches to the plot, but I wouldn't dream of giving those away.

But about halfway through, the film loses its way. I don't totally understand why -- it seems clear from early on when we see the demons that director Shiraishi Koji (Grotesque, Noroi: The Curse) isn't really taking the horror element or plot seriously. But when the jokes slow to a minimum and the film becomes bogged down with increasingly convoluted exposition (which is unnecessary in the first place since this movie has zero internal logic), I couldn't help but wonder if maybe all the humor that I thought was so sly was actually unintentional.

Whatever the case, the second half of the movie is a total slog of increasingly anti-climactic showdowns with those floating earthworms. The CGI looks like something a tech-savy 12-year-old with a consumer video camera and a green screen could have made, and, because these showdowns are visually and dramatically inert, they are accompanied by long question and answer sessions between the ditzy actresses and the psychic experts about what's happening. The very ending suggests once again that everything was probably a big tongue-in-cheek joke. I'm okay with that I guess, I just wish the second half of it were funny.
Sign-In to Vote
Tweet Post Submit

Do you feel this content is inappropriate or infringes upon your rights? Click here to report it, or see our DMCA policy.
BIFFFBrussels International Fantastic FestivalCultKoji ShiraishiShiraishi Koji