SXSW 2013 Review: THE SHORT GAME Will Double-Eagle Your Heart 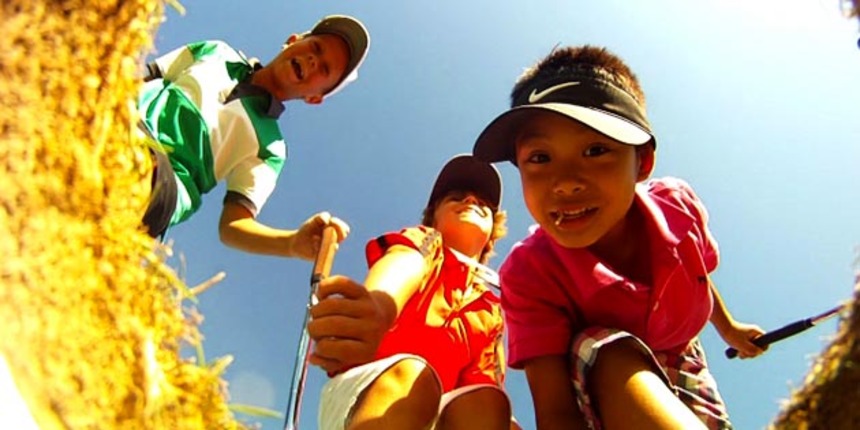 Documentaries live and die on the strength of their characters. Think about some of the most memorable docs in recent years; Billy Mitchell in King of Kong, Steve "Lips" Kudlow in Anvil: The Story of Anvil, or the soldiers of OP Restrepo. Each of these movies takes us into the lives of characters so remarkable, in some cases it's difficult to believe they aren't figments of a talented screenwriter's imagination. But it's the capture and vivid depiction of the too-good-to-be-true characters that ignites a narrative and makes a documentary really shine.

This is absolutely the case in Josh Greenbaum's youth golf documentary The Short Game. Packed with some of the most charming seven and eight year-olds ever captured, Greenbaum takes us into their lives and dares us not to fall in love. Of course it isn't enough to just setup a camera and hit record and both Greenbaum and editor Billy McMillin do a remarkable job of crafting a concise narrative, no easy feat with eight different kids to follow (and often their parents as well). The Short Game is a fantastic documentary and an absolute joy to watch from beginning to end.

The premise is pretty simple. Golf is a game loved by people of all ages. The younger end of the competitive spectrum is run by U.S. Golf Kids and that organization's major championship takes place yearly at Pinehurst Country Club in North Carolina. The champion of each gender and age group is essentially the world champion of their particular division. The Short Game follows eight kids from all over the world, aged seven and eight, as they prepare for and compete in the tournament.

While the tournament serves as the narrative backbone to the film, the story is all about the kids -- and what a cast of characters they are. There is little Amari Avery, aka Tigress, born the same day as Tiger Woods and also of African-American/Asian descent. Amari's biggest struggle is how to handle her temper when things don't go her way. South African Zamokuhle Nxasana is a jolly fellow who shares a similar shape and disposition with his jovial father (the parallels and relationships with the kids' "caddy daddies" plays a central role). For the Nxasanas, just being at Pinehurst is an accomplishment and the best case scenario is to just improve on last year's results.

Then there's world number one, Jed Dy from the Philippines. An odd little boy, Jed is a bona fide prodigy and pride of his country. His main rival is the precocious Allan Kournikova, brother of tennis star Anna and undoubtedly the biggest personality in the film. Allan seems like a normal kid but his commitment to his passion is as impressive as his crush on Alexa Pano (world number one in her division) is adorable. Light hearted moments of Allan and Alexa playing in a sand trap remind us that no matter how heated the competition gets, these are still just little kids.

That's really the most remarkable aspect of The Short Game. These kids take this competition so seriously, yet it is out of a genuine love and passion of a child almost singularly focused on doing exactly what they want to do. This isn't about kids pushed too hard to compete at an early age. These are atypical children who are quite simply the best in the world at what they do. These really are the most compelling of characters -- and that makes an incredibly enjoyable film.

More about The Short Game