SXSW 2013 Review: I AM DIVINE Lays Bare A Legend 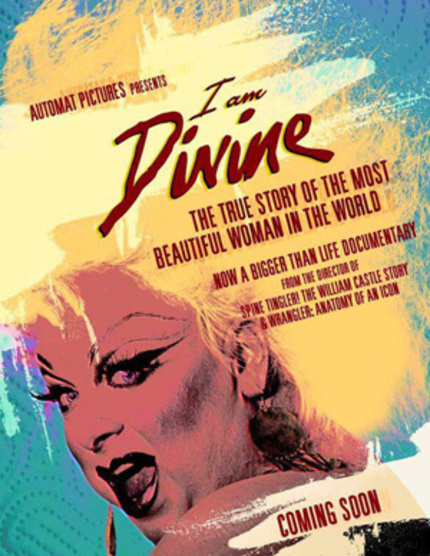 Like many sleaze fans in their mid-30s, I discovered the magic of John Waters at a relatively tender age. I have vivid memories of seeing commercials for his second crossover film, Cry Baby starring a young Johnny Depp, on television at the age of 10. However, it wasn't until a few years later, probably around 1993, that I discovered the unholy powerhouse that was Divine. I've spent years clawing my way through the works of both of these inextricably linked characters in my search for an origin, a meaning, a Big Bang beginning to the explosion of filth that has, since I was a teenager, defined my tastes. Jeffrey Schwarz's I Am Divine digs even deeper than I was able to, and finds that germ of inspiration that was able to turn a mild mannered, though slightly kooky, Baltimore teenager into one of the greatest underground heroes of the 70s and 80s.

It is a credit to I Am Divine that I'm finding it difficult to distinguish between my praise and adoration for Glenn Milstead, also known as Divine, and my love of this film bearing his name. Even though I've done my homework, read through many texts both by and about Waters and his muse, Schwarz is able to bring me even closer to the man who was the most beautiful woman in the world. I Am Divine has rekindled the passion in me that burned when I was a youngster. It wasn't just John Waters' crazy artistic sensibilities and love of camp that drew me to films like Pink Flamingos, Multiple Maniacs, Polyester, and Hairspray, it was Divine's personality and unique presence as a character that drew me into the screen.

I vividly recall seeing Pink Flamingos for the first time. I was seventeen and a senior in high school when the film was touring around the country on a 25th anniversary extravaganza. The closest place I could see it was at the UC Theatre (a regular haunt of mine) in Berkeley, CA. I ditched school that day and drove the hour to Berkeley to see this film that had eluded me for several years. When I saw all of the madness and insane passion thrown up on screen by Divine and Waters, I was hooked. The UC Theatre was an old single screen movie house, the walls were covered with ornate woodwork and filigree, and I couldn't help wondering what alternate universe I'd tripped into when I found myself watching Divine giving his son a blowjob on a 70 foot screen in this beautiful monument to cinema at its greatest. It was a divine moment in my own life.

While it is very true that there would be no Divine without John Waters, it is equally true and far less often acknowledged that there would be no John Waters without Divine. They were a match made in hell, and a pair of friends and compatriots who pushed each other to create great art both in front of and behind the scenes. However, what I Am Divine does is to elaborate upon that persona that people so dearly loved, idolized, and worshiped in a way that hasn't been done before.

Schwarz is able to draw upon some of the most people most influential to, and influenced by Divine for this feature, and the results are fascinating. Subjects range from the obvious, like Waters, to the more glamorous pals like celebrity photographer Greg Gorman, all the way to former friends and Dreamlanders like Mary Vivian Pierce and Mink Stole. Everyone loved Divine, because Divine was eminently lovable. He wasn't without his vices, though, and it is that acknowledgement by Schwarz and his interview subjects that makes I Am Divine a worthwhile documentary about a real live human rather than a puff piece of a legend. His drug habit (mostly pot) and his more obvious battles with overeating and his weight are dealt with in detail, but  never as more than the foibles of a real human being trying to live the life he wanted.

One of the things about I Am Divine that intrigued me was the series of interviews with San Francisco's infamous Cockettes art-drag-theater troupe. While they are unanimous in their praise for Divine both as a performer and as a human, it is interesting to watch different friends refer to him and both "he" and "she." Divine was a drag queen, but not a transvestite or transsexual. He liked to wear women's clothes, but he didn't want to be a woman, yet so many of the Cockettes remember him so clearly as a performer in drag that they associate with Divine exclusively as a woman. I don't think Divine would have had a problem with this; it is just one more example of his universal and undeniable appeal to people on the fringes of polite society.

Divine was a force to be reckoned with on stage or in front of a camera, and it is this raw magnetism that will be his eternal calling card. No one could deliver John Waters' ridiculous dialogue quite like him. No one could command a stage like him. And no one ever will. Divine and his presence on the New York social scene was part of a glorious history that may never be repeated. I Am Divine may not be the flashiest, most whiz bang documentary you'll see at SXSW this year, but it just may have the most heart, because Divine's was immense, and the joy he gave the world can never be taken away.

It speaks to Divine's universal and lasting appeal that the list of friends contributing archival materials to the production in the end credits goes on for several pages. The fact that so many people wanted to see and help make this film would make Divine a very happy man, even if his candle burned out too quickly. It is early in the year, but I Am Divine is sitting pretty atop my list of favorite documentaries of 2013, and I only expect that love to get stronger as I revisit it, hopefully as it tours other festivals and eventually lands on home video.

Jeffrey Schwarz has successfully moved from DVD bonus features to a career as a filmmaker profiling some of the gay community's biggest icons (Jack Wrangler, Vito Russo, and now Divine), and I think it's time for him to get recognized for what a wonderful filmmaker he really is. He is a working man, though, and continues to spend his time behind a camera in any capacity he can. I just hope that this film brings him a little bit closer to the success he truly deserves. This is the film that Divine deserves, and thank goodness we are here to reap the benefits.

More about I Am Divine