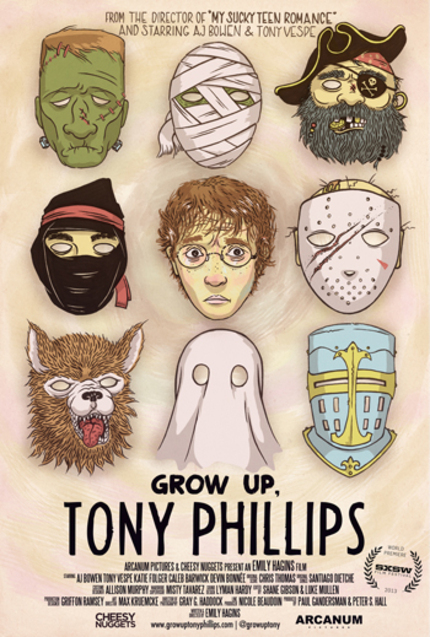 The darling of Austin, Texas, Emily Hagins, returns to the SXSW film festival next week with her latest film Grow Up, Tony Phillips. We have an excellent new poster and trailer for her film.

Who doesn't love Halloween? All of Tony Phillips' (Tony Vespe) high school friends, apparently. It's senior year and they've now decided that they're too cool for Halloween. When his older cousin (AJ Bowen) returns home right before the holiday, Tony starts to wonder if he really is the dork everyone thinks he is, or if he's just ahead of the curve.

Two of her stars from her previous film My Sucky Teen Romance return; Tony Vespe plays the title role and Devin Bonnee plays his best friend. Indie film start AJ Bowen joins the cast as Tony's older cousin.
Hagins came up on our radar a few years ago when she was the subject of the documentary Zombie Girl: The Movie, which followed the ambitious young director as she made her first feature length film, Pathogen, at the age of twelve. Hagins was embraced and nurtured by the film community in Austin and looks to be headed onto a great career in film.
The film will have its World Premiere at the Vimeo Theater next Tuesday, March 12th at 7:15pm. With our intrepid troupe of writers en route to Austin to cover the festival we hope to be able to catch Hagins' film at one of the screenings.

GROW UP, TONY PHILLIPS Trailer from Arcanum Pictures on Vimeo.

Do you feel this content is inappropriate or infringes upon your rights? Click here to report it, or see our DMCA policy.
aj bowenemily haginsgrow up tony phillipsSXSW 2013