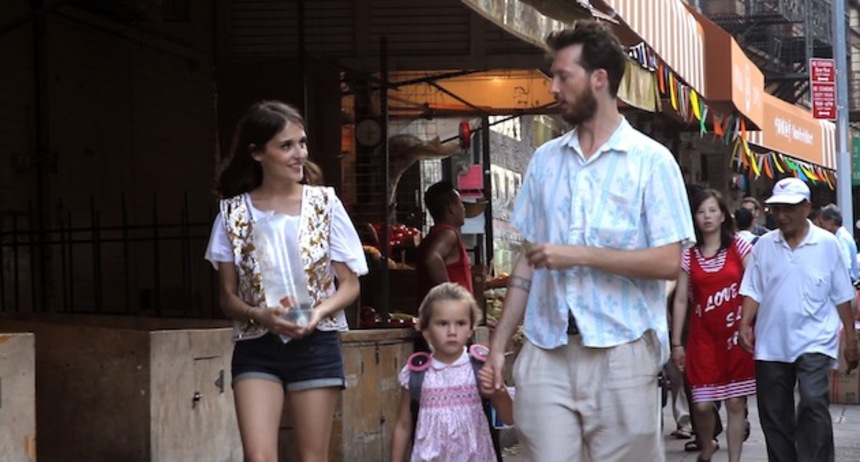 Director Ruben Amar is no newb to the world of film festivals, what with his slew of short films, including Checkpoint, playing the likes of Slamdance, Saraosta and Palm Springs. Teaming up with his fellow French compatriot Lola Bessis for her directorial debut (as well as first starring role), the duo bring their feature Swim Little Fish Swim to the narrative competition at this year's SXSW. With the world premiere going down tomorrow, March 11th, we've got the trailer to share with you today.

The film centers on a young married couple in New York who encounter familial shifts when a young french woman comes to stay with them. Yes, yes, I know how it may seem to read, but the film looks rather wonderful. The teaser trailer itself strikes a fanciful mood, opting to show rather than tell. The biggest thing I took away had to be its near other worldly charm, which I found reminiscent of the Safdie Bros. films The Pleasure of Being Robbed and Daddy Longlegs. And no wonder I felt that, as Swim Little Fish Swim shares with those a cinematographer in Brett Jutkiewicz. Featuring a number of folks from the art and music world in NY, the film seems to have found a good launching pad at SXSW and I look forward to where it goes next. Watch the trailer and  read a synopsis below:

Set in New York, Swim Little Fish Swim focuses on the domestic life of Leeward (Dustin Guy Defa) and Mary (Brooke Bloom), a young married couple at a crossroads. Mary is a hardworking nurse determined to turn the couple's lives around while Leeward is a struggling marginal musician who fancies himself a misunderstood artist and New Age visionary. The two can't even agree on what to name their three-year old daughter (Olivia Durling Costello). Enter Lilas (Bessis), a 19 year-old French artist trying to make it in New York and escape the shadow of her famous painter mother (Anne Consigny). When the bubbly young woman moves into the couple's tiny Chinatown apartment their already fragile balance is upset even further.