Review: THE ATTACKS OF 26/11 Is A Brutally Violent And Vapid Exercise In Grotesquery 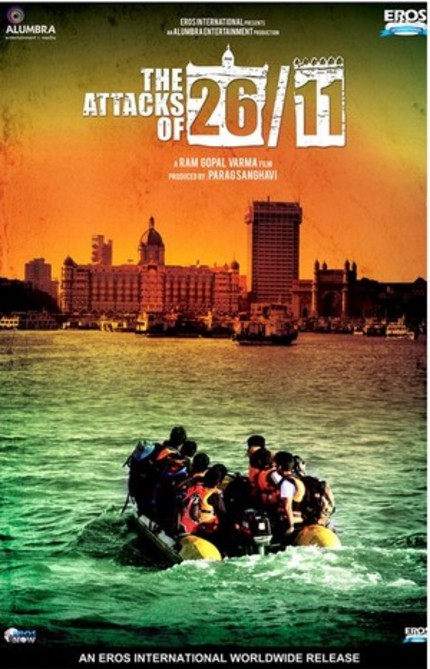 There was a time when a new Ram Gopal Varma film was a thing to anticipate with great hopes. It can be difficult to remove the artist from the art, however, Ram Gopal Varma (RGV) has made a career of melding the two.
The constant flow of controversy that flows from him like water from a spring has become something of a given in India these days. If he isn't promoting his own films, he's saying something incredibly offensive to keep his name in bold typeface on the front of the gossip mags. It makes for an entertaining character, that's for sure, but somewhere along the way RGV stopped focusing on what made him famous in the first place: making good movies.

The terrorist attack on Mumbai in November of 2008 was one of the most audacious and pointlessly violent events in modern history. While we rightfully recognize the 9/11 attacks as the apex of terrorism's callous disregard for human life, the Mumbai attacks were even more brutal in many ways. Ten men sailed into Mumbai harbor and terrorized the city for a day, wantonly shooting and killing 166 men women and children in various high profile locations around the city. The attacks were made all the more shocking by the personal nature of the violence. This wasn't a random bombing, or even a suicide bombing, these were men who looked into the eyes of defenseless civilians and gunned them down in cold blood. The very confrontational style of the attack is something that haunts India today, and probably always will.

Ram Gopal Varma's film was made to recreate that horrific day in detail, but to what end? It's a slippery slope to film recreations of events that have so traumatized an entire nation. Hollywood has tried it a couple of times with World Trade Center and United 93, and managed some success. Sadly, RGV's The Attacks of 26/11 does not manage that same success. The film has no soul, serves no purpose other than to shock, and provides its audience with no relief nor connection to any of its characters, heroes or villains. It is an empty exercise in onscreen violence and savagery, made only barely tolerable by the performance of its lone sympathetic character, Joint Commissioner Rakesh Maria (played by Nana Patekar in a performance far beyond what this films deserves).

It's hard not to talk about Hindi mainstream films in terms of halves, since that is the way they set themselves up with intermissions built into even the shortest of features, and so I'll submit that the first half of The Attacks of 26/11 is both the most gripping part and the most problematic. Shot documentary style, with cameras simply observing, and a conspicuous lack of visual flair, the first half of the film does nothing more than follow the terrorists as they rip their way through a popular pub, a prestigious hotel, and a hospital. There is no back story given to the attackers, nor is there anything to connect the audience to the victims, apart from our shared humanity. This lack of emotional investment in the bodies on screen could not have been anything other than intentional, and I understand it as a way to display the inhumanity of the attackers, but it also dehumanizes the victims, which is what leads me to ask what the purpose of the film is.

For its first hour, The Attacks of 26/11 looks more like security camera footage from a terrible attack than a film about the attack. Apart from the odd close up of one of the gunmen brutally murdering a random, nameless civilian/child/woman, there is nothing to connect the viewer to the victims, the people with whom we should sympathize. While RGV insists that this is a film about the attacks, it is more of a film about the attackers. It certainly doesn't glamorize them, however. It spends an uncomfortable amount of time and effort attempting to get into their heads while ignoring the people who actually deserve our sympathy. In the end, it looks like a video game; a soulless, violent parade of brutality without real consequences. The piles of bodies that litter the frame are given no heft, no life, no humanity, and that is the film's biggest problem.

Fortunately for RGV, after the intermission he appears to remember that he's making a movie, and The Attacks of 26/11 turns into something altogether different. The real event had only one survivor, the diminutive Ajmal Kasab, who was detained and interrogated long before the bullets ran out. The story of his detainment and confessions to Patekar's Joint Commissioner fill the final hour of the film, and nearly make up for the flatness of the first half. The problem is that, again, rather than attempting to humanize Kasab, the film turns him into a monster. The Joint Commissioner, who is the lead in the framing device of an official inquiry into the events, even mentions as much in his monologue. Patekar's character calls Kasab a dog, and notes that you don't get angry at a dog when it attacks at its owner's command. This in no way absolves Kasab of his actions, but it manages to highlight the shortcomings of the film, namely the lack of context for anything happening on screen.

The second half of the film finds Sanjeev Jaiswal as Kasab chewing the scenery like nobody's business and Patekar philosophizing at him in a number of well-delivered but hokey speeches. At this point, the film turns into an exercise in vengeance and something approaching fan service. The audience for this film is the same as the victims in the film; Varma is attempting to hold up a mirror to the people of India and acknowledge the barbarity under which they suffered for that one terrible night and day. As a result, there can be only one conclusion: revenge. Handily for Varma, the real Ajmal Kasab was executed only four months ago, plenty of time for him to fit into his film and give the audience the relief they require after being subjected to this cavalcade of horrors for two hours, thereby circumventing the need for any further exploration of the event and its further cultural and political implications.

I don't know what I was expecting going into The Attacks of 26/11, but I'm sure I wasn't expecting subtlety, and RGV didn't let me down. The film is brutish and coarse, more than earning its "A" certificate from the CBFC (the film also earned a rare "18" from the UK's BBFC). However, it is also vacuous and soulless. Not even the strong performance of Nana Patekar could make this film worth watching again. If you're looking for the return of Ram Gopal Varma the auteur the way I was, you'll have to keep waiting. You won't find him here.