Review: OZ THE GREAT AND THE POWERFUL Deflates on Arrival 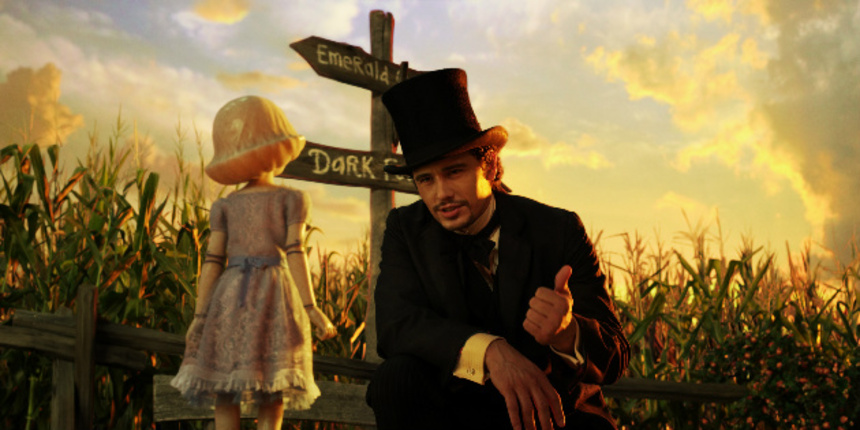 The most magical part of Sam Raimi's Oz the Great and the Powerful ironically doesn't even take place in the titular fantasy-land, but rather in the dreary, black-and-white real world. Like The Wizard of Oz, to which this film is a mostly by-the-numbers prequel, the movie begins in Kansas, which remains a place literally deprived of color, and which is here filmed in a square, 4:3 aspect ratio for good measure. That said, the dingy traveling carnival where we first meet con-man/illusionist Oz (James Franco) is anything but mundane. Here, we've got angry strong-men and clowns, magic shows gone heartbreakingly awry, and, at the center of it all, Franco as a sleazy, cynical illusionist who wants nothing more than to be the next Thomas Edison. It's also here that Raimi seems most at home, directing with visual charm and pizazz, and keeping the gags and twists rollicking along at full-force.

But then, as we know it must, a huge tornado shows up and whisks Oz and his hot air balloon away to a magical land that happens to bear his namesake. And, just as his balloon deflates in a shallow pond filled with sharp-toothed fairies, so too does the film's sense of energy and magical adventure.

Oz immediately meets a witch (Mila Kunis) who informs him of a prophecy concerning a wizard who is supposed to come to their world, defeat the wicked witch and become king. Oz likes the idea of becoming king, so he goes along with the idea that he might be this wizard. He then meets several more witches, two of whom eventually turn out to be wicked, a flying monkey with Zach Braff's voice and a little girl made of china. He goes back and forth about the fact that he's a total phony and probably not equipped to save the world, but eventually rises up to archetypal hero's quest as, again, we know he must.

The plot, while basic and mostly predictable, is probably fine. The original Wizard of Oz isn't remembered as some paean to sophisticated storytelling either. But that film still piqued the imagination, and generated a sense of wonder and magic. It also created a heartfelt camaraderie between its band of misfits that special-effects advances over the years still haven't diminished. Oz the Great and the Powerful, on the other hand, feels exactly like what the cynics said it would be: An expensive, empty retread of the Alice in Wonderland-remake formula commissioned as a cash-grab by the Disney machine.

Quite simply, there is very little actual wonder to be found in any of the meticulously rendered CGI set-pieces. In fact, the actors never really look like they're actually in Oz, but instead like they are standing in front of fancy, 3-D rear-projection technology. Even the interactions between the real actors and the CGI characters seem clusmy and a bit off, as if no one was ever sure exactly what they were interacting with or what their spatial relationship to it was. Also, while the different lands of Oz are all extremely colorful and complex, none are particularly visually inspired. Emerald City now looks like a slightly more modern version of the castle at Disney World, the dark forest looks a like a set left over from a Tim Burton movie (maybe even the Alice in Wonderland Remake) and perhaps the most interesting place in the film, a town with buildings and inhabitants made completely out of china, gets barely five minutes of screen time.

Most of the action scenes feel like the same CGI overkill we've all seen before in these types of movies, and while spurts of Raimi's trademark sucker-punch visual style occasionally add a bit of life to the proceedings, these instances are few and far between. Also, Bruce Campbell shows up briefly and gets hit with a stick several times, which was a bit fun.

The film is also woefully miscast. Franco provides a few dryly amusing moments, usually involving his detached, stoner-style scthick, but overall, he isn't anywhere near energetic enough to carry the film, especially not as a con-man. Kunis fares even worse, and while it's hard to tell whether it's the fault of the bland dialogue or her inability to make her character's necessary histrionics convincing, the result is both baffling and awful. Rachel Weisz and, especially Michelle Williams, manage to keep their heads above water, but just barely. Really though, given their range and talent, it's tempting to blame almost all of the actors' failings on the script.

The story itself, as mentioned, is simple and fairly efficient. It's even occasionally clever in the conceptual way it ties together with the original film. But everything unfolds with almost no wit or imagination. The inhabitants of Oz all speak in a strangely direct way, as if they're only relating what the audience and Oz needs to know before moving onto the next set-piece. Some jokes fall flat and others fizzle out so quickly that it's questionable whether they were even meant as jokes in the first place. As a result, the entire journey feels rushed and indifferent, without any of the humor or heart that buoyed the original film when the story stalled.

That said, while Oz The Great and the Powerful never transported me back to my childhood, it is probably diverting enough for actual children, and it gets the job done without too much unnecessary pandering. It's never mean-spirited, and its overall message about believing in yourself is delivered without any overt cynicism. So, while it's not a particularly good movie, it's also fairly harmless. Fans of the original may also appreciate the many affectionate nods to the world Victor Fleming brought to life back in 1939.

Still, I had hoped for more from Raimi, who showed recently with Drag Me to Hell that he's still a master showman and entertainer, and who also seemed like a wonderful guy at the film's Paris premiere. Maybe he's still more at home in the world of tangible, practical effects. Or maybe Disney has simply devised a system to where all of these effects-laden fairy tales come out exactly the same no matter who directs them. If nothing else though, Raimi still delivered an energetic, clever and affectionate short-film homage to both the original Wizard of Oz and the low-rent carnivals of yesteryear. Unfortunately, there's more than another hour and a half of other stuff after that.

Note: Brian Clark is reviewing the film from its premiere in Paris, where he is based.

Do you feel this content is inappropriate or infringes upon your rights? Click here to report it, or see our DMCA policy.
James Francooz the great and powerfulSam RaimiThe Wizard of Oz

More about The Great and Powerful Oz